Improvements in efficiency and infrastructure are bringing electricity to the masses. That's not so great for energy companies

First, on the positive side: Incandescent light bulbs are being replaced by light-emitting diode (LED) bulbs, which consume much less power. India has about 770 million of the older, inefficient bulbs, and as of Thursday had installed 253 million LEDs, according to the government’s excellent National Ujala Dashboard, which tracks deployment of bulbs, tubelights and efficient fans: The result of all of those newer bulbs is 6.5 gigawatts of “avoided peak demand" — which means that the power system no longer needs to supply that much power for lighting. Put another way, 253 million LEDs means that India’s peak electricity demand is already 4% lower than it would be without LED bulbs. Tripling the number of LEDs and eliminating every inefficient bulb would increase the avoided peak demand to 20 gigawatts, or 12%. 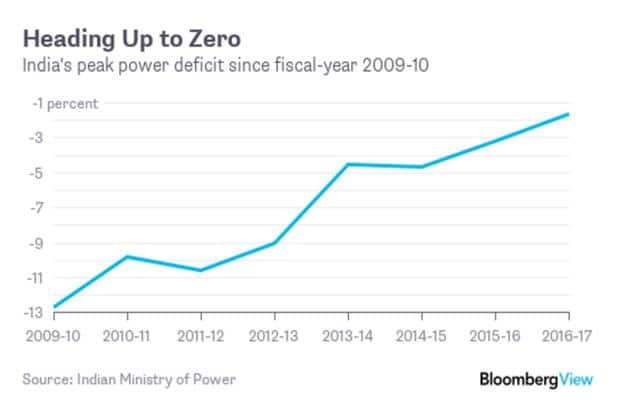 That welcome approach to zero deficit is also due to more power generation and better transmission and distribution. Demand grew by nearly 9% in 2014, but Bloomberg New Energy Finance expects that number to drop by two-thirds by 2021 (and rise again after that). 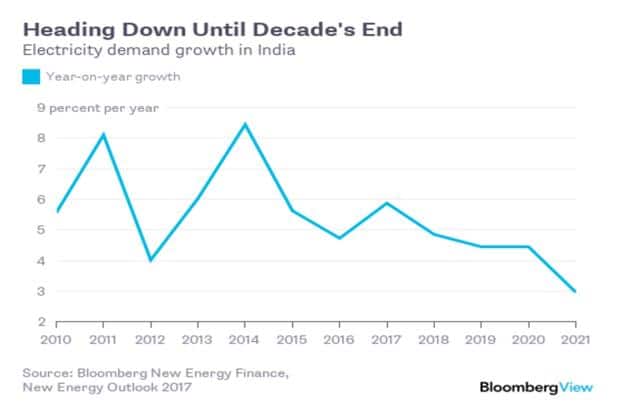 Greater efficiency in new lighting, and greater delivery of generated power, are both great things for India. They’re less great for power generators, whose plant load factors (or operational hours out of their potential total per year) have been falling steadily even as power deficits have fallen. India’s technology and infrastructure interaction is complex, but it’s also a useful lesson in thinking about long-term growth. India’s demand for electricity is still growing, as is the physical plant to support it. That physical system is also simultaneously improving in efficiency. Slower-than-expected growth can be cold comfort; for those who planned and built for higher growth, slower-than-expected growth looks like no growth at all, or even negative growth.

In his book “The Big Short," Michael Lewis says that “markets are a collection of arguments." In India’s power market, technology and efficiency are on the winning side of that argument. Bloomberg