The puzzle of India’s industrial growth

GDP numbers show value added, while IIP numbers measure volume. But which set of data should policymakers rely on?

Industrial production fell 0.8% in April, while manufacturing contracted by 3.1% compared to the previous year. That seems to suggest Indian industry is in dire straits. But manufacturing growth for 2015-16 as well as for the January-March quarter at constant prices was 9.3%, according to gross domestic product (GDP) data. True, the GDP numbers show value added, while the Index of Industrial Production (IIP) numbers measure volume. But which set of data should policymakers rely on?

Chart 1: The index of capital goods came in at 186.3 for April. That is the lowest capital goods output for the month of April since 2010, as the chart shows. If the numbers are correct, investment demand is clearly in terrible shape. 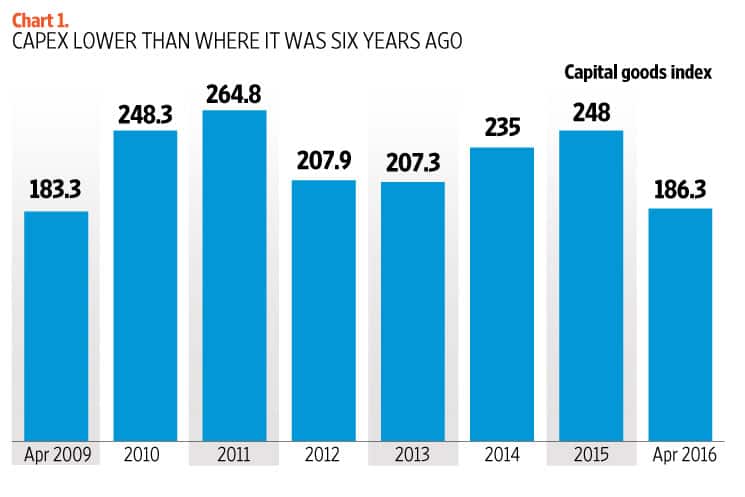 Chart 2: Consumer goods are doing better, although production contracted by 1.2% in April. Consumer durables production has picked up and the index was at 289.3 in April, 11.8% higher than in April last year. Note, though, that the consumer durables index was at 290.5 in April 2011, which means it is lower than where it was five years ago. Is this really true? Could it be due to the imports of consumer goods, perhaps Chinese imports?

Also, as the chart shows, the index of consumer non-durables, or perishable consumer goods, was at 142.6 in April, the lowest for the month of April in four years. If correct, this figure brings out the extent of rural distress. But there are questions about the reliability of the IIP data, so let’s look at four more charts taken from a survey of industrial units from the Reserve Bank of India (RBI)—its latest Industrial Outlook survey. Chart 4: This chart shows that animal spirits in the industry are at their lowest since at least 2010-11. Expectations weren’t this low even during the dark days of 2013-14. The optimism from the new government taking power in 2014 seems to have completely fizzled out. Chart 5: This chart shows the expectations for industrial production. Again, it’s now at the lowest in at least the past seven years. Chart 6: Nor is the near future expected to be brighter, if the order book expectations of industry, from the RBI survey, are any guide. Chart 7: What does all this mean for industrial employment? As the chart shows, optimism about employment is higher now than in 2013-14, but only just. The initial high hopes of 2014-15 and 2015-16 have been dashed. The gross value added numbers for industry and the Index of Industrial Production paint very different pictures of the industrial economy. Yes, they measure different things. But the question ultimately is: which yardstick corresponds most closely to the empirical conditions on the ground? Perhaps it’s best to ask businessmen that question, which is precisely what the RBI’s Industrial Outlook survey does. Their answer is unequivocal.