Home / Opinion / Online-views /  Meditation and investing: the power of stillness
Back
Share Via

Meditation and investing: the power of stillness

In investing, as in meditating, a lot can be achieved by having faith in the larger forces at play, and just sitting back and watching them give you the fruits of your perseverance

There is a lot in common between meditation and good investing. Sitting still for long is simple but not easy. Remaining invested in equities for long periods is also simple but not easy. Those who can simply sit still know its immense benefits. The few who can or have remained invested in good equity funds or equities for long periods have reaped immense benefits. Also, just like the right choice of a guru can make the spiritual journey quicker and easier, the right choice of fund(s) can make the investing journey more rewarding. 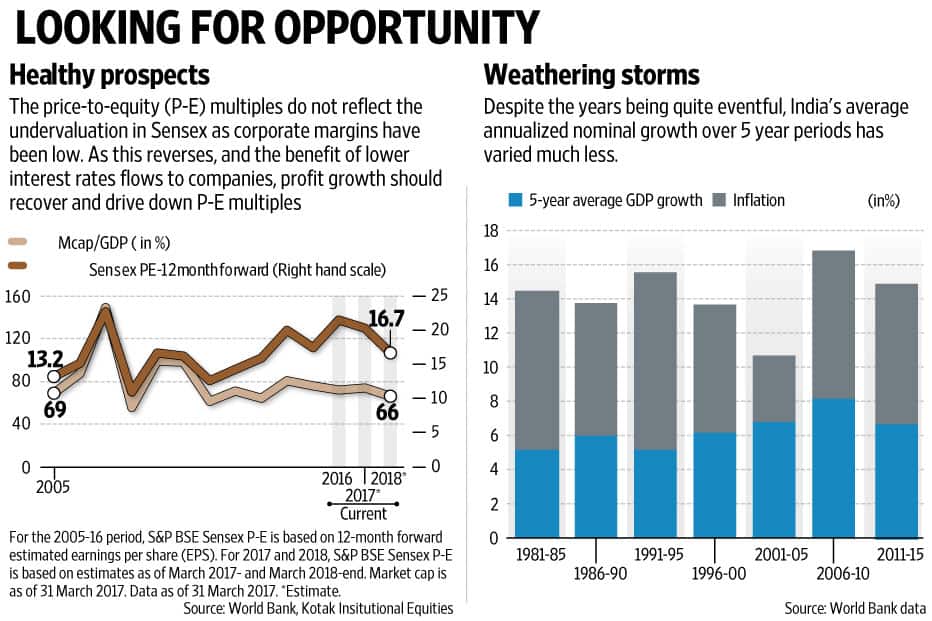 Equities are remarkably simple. Over short to medium periods, equities are volatile and uncertain but over long periods equities deliver returns in line with the growth of the underlying businesses. For a well-diversified portfolio this growth becomes similar to economy’s growth in nominal terms (real growth plus inflation). So, it is not surprising that the S&P BSE Sensex has compounded at about 16% per annum since 1979, its inception. This is remarkably close to the about 14% per annum nominal growth of the Indian economy over this period.

Indian economy had and continues to have strong growth drivers, such as: a growing population, low but rising urbanization, increasing affordability, low penetration of consumer durables, competitive wages, large number of entrepreneurs, availability of vast natural resources, and a stable political, administrative and judicial setup. It is because of these reasons that the economy routinely ignores the changing global and local headlines. The period from 1990s onwards has been particularly eventful: liberalization, followed by globalization and now demonetization. From the Asian crisis to Lehman Brothers, from the European crisis to Greece, from economic sanctions by the US against India after Pokharan blasts to India now becoming a key US defence ally. From cash to e-wallets. And yet, in the past 20 years, each year the Indian economy has grown 4-10% in real terms and 8-22% in nominal terms (real growth plus inflation). The average annualized nominal growth over 5-year periods has varied much less and has ranged between 14% and 17%, except during 2001-05 when it was around 10%.

With this tailwind of double-digit nominal GDP growth, it is no surprise that nearly 85% of equity funds have delivered more than 12% compounded annual growth rate (CAGR) and nearly 60% have delivered more than 14% CAGR over the past 20 years. The better ones have in fact delivered returns close to 20%. Interestingly, there are 10 funds that have net asset values (NAVs) of more than Rs400. This means that money in these funds has become more than 40 times in nearly 20 years (starting NAV of Rs10, and most of these funds were launched in mid-1990s). It is worth noting that a 20% CAGR over 20 years takes Rs10 to Rs380.

While funds proudly display NAVs of Rs400 and more, only a small minority of investors have experienced similar wealth creation. This is because the vast majority of investors moved in and out of equity funds several times in this period, from equity funds to liquid and back, from lower-rated funds to higher rated, only to witness role reversal of funds in some time. In other words, the majority frequently churned their funds and refused to stay put. Only a small minority—who simply remained invested in a few carefully chosen funds for this entire period—reaped immense benefits. In investing, quite often, doing nothing is more profitable than doing something.

Most investors tend to watch every small move of the market, linking it to events all over the world. And despite failing in their predictions repeatedly, keep on doing so. Forecasting short-term movements of the markets is not just futile, it is also immaterial over the long term. For example, presently when the Sensex is at 30,000, what great value has been added by predicting a fall from 5,000 to 4,500 in 2004 when BJP lost elections? That’s why someone has aptly said: “Time in the markets is more important than timing the markets."

The Indian economy now appears to be at the threshold of a period of faster growth. The current government, through its several initiatives—giving a bank account to every one; replacing physical subsidies with cash transfers; focus on infrastructure; simplifying tax laws and targeting better compliance; improving ease of doing business; emphasizing local manufacturing; cleanliness; better price discovery for agricultural produce; following policies that lower inflation and fiscal deficit—has created conditions that are conducive to drive real growth to a higher level.

Apart from this, equity valuations are encouraging as well. The chart clearly depicts that the market capitalisation to GDP of the economy is at attractive levels. Sensex has significantly underperformed the economic growth for several years now. This undervaluation is not visible in the price-to-equity (P-E) multiples as several factors (high wages growth, low capacity utilization, stalled projects, high interest rates, and others) have driven down corporate margins to near all time lows. As these factors reverse and as the benefit of lower interest rates flows to companies, profit growth should recover and drive down P-E multiples over time.

In conclusion, equities are a simple asset class. But getting the best from them is not easy. That needs a clear understanding of equities, lots of patience and faith. The prospects of equities are closely tied to the long-term prospects of the economy. To benefit from equities, investors should estimate their risk capital, invest the same in a few carefully selected funds, and then hold these for long periods.