What the flooding of the Nile says about the Nifty

While Nifty is positively serially correlated over the very short term, if we look at slightly longer time periods, we find that the index is actually mean reverting

The story shows how important the flooding of the Nile has been to Egypt since biblical times. For a long time, this remained an unpredictable phenomenon, with none of the standard forecasting models being able to predict it. In the early 20th century, the colonial British government decided to construct a reservoir on the great river, but the big problem was to decide the size of this reservoir. Around this time, in 1906, hydrologist Harold Edwin Hurst joined the project.

Hurst was to remain in Egypt and be associated with the Nile for 62 years (the Egyptian government retained his services after the country’s independence). Looking through 847 years of Nile overflow data (existence of this data tells us much about the farsightedness of the Mameluke and Ottoman rulers of Egypt), Hurst managed to crack the puzzle. The model he built was one of long-range dependence. It is a model that has far-reaching effects, most importantly in the financial markets. 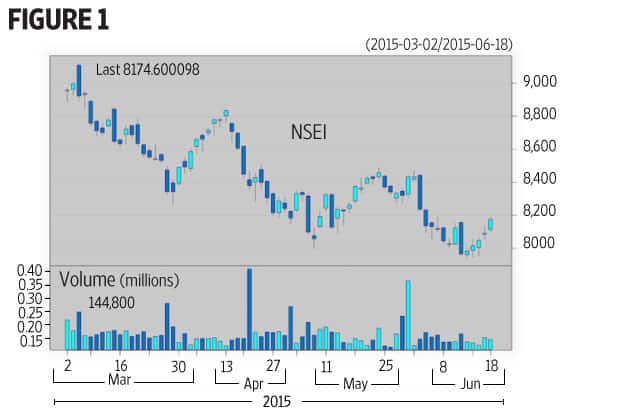 Standard models of stock markets assume that they follow a so-called random walk, or Brownian motion. They assume movement of the markets in two adjacent time periods are independent of each other, and this is true irrespective of the size of these time periods. The question sometimes arises if markets do indeed follow a random walk, and if they don’t, how far away from this assumption are they.

This question is pertinent now given the movement of the Nifty index on the National Stock Exchange over the past three-four months. The index has shown remarkable serial correlation in this time period—an up day results in a series of up days and similarly with down days (see figure 1). Thus, we can hypothesize that the Nifty currently has positive long-range dependence. How can we test the hypothesis?

This is where Hurst’s work on the Nile comes in, further developed and improved upon by mathematician Benoit B. Mandelbrot (more famous for his work on fractals). The fundamental concept is what is known as rescaled range.

If the time series has positive long-range dependence (or an upward move today more likely to cause an upward rather than downward move tomorrow), the potential range it can achieve in N time periods is going to be higher than that of a random walk (this is not hard to see. If an up movement results in further up movements, it is likely to go much farther from the origin). On the other hand, if the series has negative long-range time dependence (an example of this is a mean reverting series where any movements away from normal are likely to cause a bounce-back), then the potential range the series can achieve in N time periods is much less than that of a random walk.

Mandelbrot chose to call this exponent after Hurst. He abbreviated it as H, and declared that the said H could stand for either Hurst or German mathematician Otto Hölder. Algorithms for calculating this exponent are available online. The Matlab code can be found here (mintne.ws/1CqqkEt), and I’ve translated the same code into R and uploaded it here (http://mintne.ws/1CqqkEt). Using this code, we can determine whether the Nifty has long-range dependence.

How could this be the case when the short-term time-dependence is apparent? We don’t need to dig too deep for the answer. While the Nifty is positively serially correlated over the very short term, if we look at slightly longer time periods, we find that the index is actually mean reverting. This mean reversion on longer time periods overrides the serial correlation in shorter time periods to give us a Hurst exponent lower than 0.5.

How does this compare with other indices? Other Indian indices are closer to following random walks than the Nifty (see figure 2). Interestingly, the benchmark Sensex follows almost a perfect random walk, indicating the possibility of a trade on the difference in Hurst exponents of India’s two flagship indices. 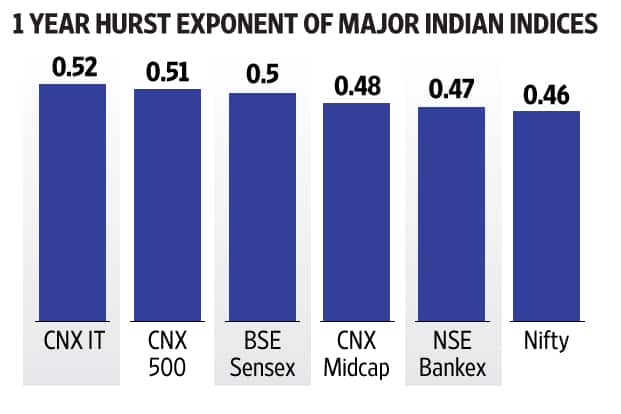 Most major global indices are also closer to the random walk than the Nifty, with one notable exception; the S&P 500 has a Hurst coefficient of 0.43, indicating that it is much more highly mean reverting (see figure 3). Considering that some global indices have positive long-range dependence and some negative, the possibility of existence of a trade cannot be ruled out. 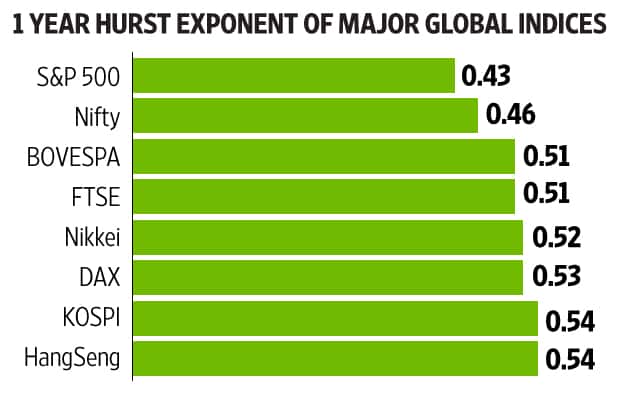 When Harold Edwin Hurst modelled the flooding of the Nile based on more than eight centuries of data, the Hurst exponent (as it came to be called) turned out to be a whopping 0.73. The Nile code, so to say, had been cracked. This finding by Hurst allowed engineers to construct a reservoir large enough to hold enough water to hedge the vagaries of the Nile. In recognition of his services, Hurst earned the moniker Abu Nil, or Father of the Nile.