Keep your water pure and simple

Keep your water pure and simple

Nothing symbolizes the gullibility of the modern consumer more than the bottled drinking water boom. Don’t get me wrong. I can see at least one good argument for bottled water: safety. In Third World countries, the water in the taps is usually unfit to drink. And restaurants often can’t be bothered to invest in water purification systems. This is as true of parts of Europe. So, if you are travelling or eating at a restaurant that seems to be insufficiently careful about the cleanliness of its water, then of course, I can see the argument for ordering bottled water. 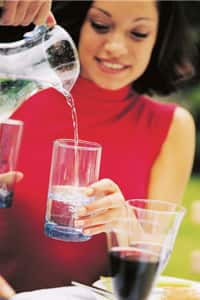 Free flow: Refuse the bottled option, ask for a jug of water instead.

But that’s about it. Anyone who orders bottled water in circumstances other than the ones I’ve described above has either been made a fool of or is a bit of an idiot.

Bottled water is not a new product. It has been available in Europe for decades. Because their tap water was rarely clean, it made sense for Europeans to treat water as a bottled drink; as the sort of thing you order along with the wine.

But the European predilection for bottled water remained at roughly the same level for many decades. The global water boom only began in the late 1970s and early 1980s when canny marketers began pushing Perrier in the US. The water — gently fizzy so it reminded you a little of soda water — had been around in Europe for years. But it was pitched to the US market as a sophisticated drink, as a way of declaring “I have arrived".

Soon Americans began ordering Perrier by the case, drinking it with a twist of lemon as though it was a cocktail and even using it as a mix for alcohol. Encouraged by the success of Perrier, other European waters made a dash for the US market. Many were fizzy waters in the manner of Perrier, but some were still.

In most — if not all — of the US, the tap water is clean enough to drink. Nor is there a shortage of supplies of club soda. So why did Americans need to pay such high prices for bottled water?

Partly it was the lure of sophistication. But, as market penetration spread, the water companies began encouraging a culture of lies.

European waters were — or so credulous Americans were told — imbued with mystical properties. The gas in Perrier, for instance, was entirely natural. The water emerged from the earth full of bubbles.

The beauty industry was drafted to help spread the lies. Some of you will remember how, in the 1990s, articles about the miraculous effects of water began appearing. So called nutritionists told us that we should drink our body weights in water. Beauty editors declared that the secret of a great complexion was water. Other drinks, we were assured, would not do. The body thrived only on water. Every other liquid would not have this effect.

Even the occasional hiccup could not stall the progress of the water marketing juggernaut. Perrier faded from the US market after a massive product recall. The gas inside a batch of bottles, we were told, was unsafe. Hang on a minute, we should have said. But surely the gas is natural?

But few people asked. And therefore they never found out that Perrier actually added the bubbles at a factory. Machines created the alleged natural sparkle. Most other sparkling waters follow a similar process.

Even though Perrier virtually disappeared, the water industry continued to grow. The big boys — Pepsi, Coke and the rest — entered the business selling ordinary water (available free from American taps) at a huge markup on the backs of multimillion-dollar marketing campaigns.

With so much money riding on the water boom, the media rarely questioned the claims made by the water companies. Hardly anyone challenged the basis of the water-is-healthy campaign: the assertion that the body needs water and not other liquids.

In fact, this claim twisted the truth. It is true that human beings need to drink plenty of fluids to avoid dehydration. But it is not true that fluids other than water cannot combat dehydration. What the flacks did was this: They took the medical evidence for the effects of dehydration (bad skin, body odour, etc.) and transformed it into the case for bottled water.

Not only did they get away with this, the media rarely asked the obvious follow-up question: Even if we need water rather than any other fluid, why does this water have to be the bottled stuff? Why can’t we just drink it from the tap?

In the end, it was another trendy campaign that finally made a dent in the water boom. The current Western obsession with global warming means that all products are audited on environmental grounds and on the basis of carbon miles.

On any environmental criterion, bottled water is a disaster. It uses glass or (more likely) plastic to bottle a product that does not need to be bottled and then transports it for many miles even though it is already available, in its natural state, at the destinations it travels to. At a time when the West is trying to cut its carbon footprint, bottled water is one of the worst environmental offenders.

The lunacy of a few years ago when restaurants had water menus and water sommeliers is now finally powering down. More and more restaurants in England and the US have abandoned the old scam of giving you a choice between types of bottled water while refusing to offer tap water. The US was always better when it came to providing tap water but even London restaurants now fill your glasses without question.

Sadly, India is neither environmentally conscious nor immune to the hand-me-down blandishments of marketers who have borrowed their scams from the West. So you’ll rarely be offered normal, purified water at a five-star hotel or a fancy restaurant. You will nearly always be ripped off with overpriced bottled water.

If you are sure about the cleanliness factor (and at hotels, water is always safe) then refuse the bottled option and ask for a jug of water.

It’ll demonstrate that you are environmentally aware. But more important: It will prove that you aren’t an idiot, eager to be ripped off by some canny marketer.