"storyDirectUrl"
OPEN APP
Home / Opinion / Online-views /  Is there more to India’s urbanization beyond Delhi and Mumbai?

Is there more to India’s urbanization beyond Delhi and Mumbai?

With close to 25 million people living in Mumbai and Delhi combined, India's urbanization has clearly been lop-sided

Back home, not only billionaires but also ordinary urban people seem to be concentrated in a few big cities. Close to 25 million people live in Mumbai and Delhi combined. In other words, 3% of India’s entire population occupies only 0.06% of its total area.

Such facts beg the question whether India’s urbanization has been lop-sided? Are we likely to see further concentration in select few urban metropolitan areas rather than more widespread urbanization?

A recent research paper by Juan Pablo Chauvin (of JFK School of Government, USA) and others tries to draw some inferences.

People have an incentive to migrate from smaller to bigger cities because typically the latter offer higher earnings. However, economic theory suggests that over a period of time as more workers migrate to bigger cities, these will become overcrowded, see an oversupply of labour, eventually leading to lowering of earnings. Thus, migration should lead to equalisation of earnings, if not between rural and urban areas, then at least between smaller and bigger cities.

However, district-wise data shows otherwise. The chart shows that districts with high urban population density tend to report higher urban incomes. In other words, big cities, like Mumbai and Delhi, still offer higher incomes than other urban areas and that leaves incentive for further migration into such cities. 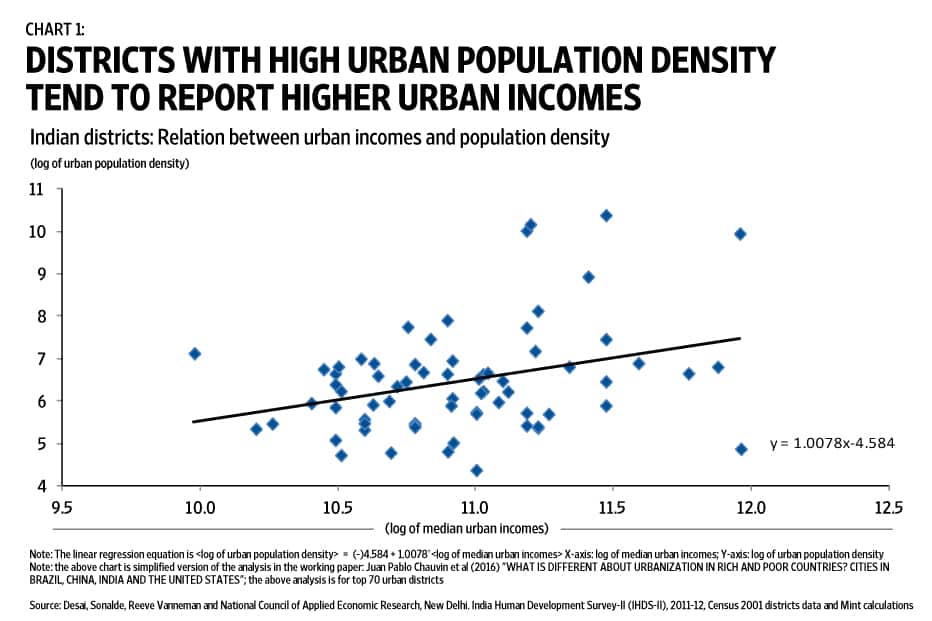 Now, it is possible that cities that offer higher earnings are also more expensive to live and have higher house rents that negate the benefit of higher earnings. If that is the case, then there should be some positive relationship between earnings in a city and house rents. However, plotting district-wise incomes against district-wise rents shows that there hardly exists any relationship between the two. In other words, urban areas with higher incomes do not necessarily observe higher rents. This means that it would be worthwhile for the average worker to migrate from a smaller city to a bigger city, which would likely provide higher wages without necessarily extracting a higher rent.

To be sure, it is possible that this non-relation between income and rents partially reflects lack of reliable data for India. Chauvin’s paper also notes that many a time rents might be distorted due to instances where landlords are not allowed to raise rents or eject tenants.

Nevertheless, available data gives us enough reasons to suspect that urbanization in India has been lop-sided and continues to encourage migration from rural areas to urban areas and from smaller urban areas to bigger urban areas. Again, as in the case of urban rents in India, data on migration too remains subject to scepticism. Chauvin’s paper suggests that India’s migration data might be actually understating the true amount of migration that occurs as the data most likely misses temporary migrants.