Demonetisation has adversely affected the growth in clients, loans disbursed and repayment rates

How has the demonetisation of November 2016 affected the cash-driven microfinance sector? Anecdotal evidence and media reports from different parts of the country in the first few months following demonetisation indicated considerable problems with loan disbursement and repayment. However, as we near the first anniversary of the withdrawal of specified bank notes, evidence of the impact on the hitherto growing microfinance sector demands attention.

The Microfinance Institutions Network (MFIN) is an association of non-banking financial company microfinance institutions (NBFC-MFIs) that publishes a quarterly report called “Micrometer"—a rich source of data on several performance indicators of the country’s microfinance sector. We analysed data from several reports of MFIN, spanning five quarters over the period 1 January 2016 to 31 March 2017 . This covers three quarters before demonetisation and two after demonetisation (the quarter ended 31 December 2016 and 31 March 2017).

In terms of loan amount outstanding, while banks are the largest source of micro-credit (if one includes both direct lending and indirect lending through business correspondence channels), NBFC-MFIs come second. This is followed by small finance banks (SFBs), NBFCs, and non-profit MFIs.

Our analysis reveals severe negative impacts of demonetisation. The year-on-year growth of number of clients reached out registered a decrease of 2% over the previous quarter (pre-demonetisation period). The loan amount disbursed the three months ended 30 December 2016 decreased by 16% from a year earlier. The total number of loans disbursed fell by 26% in the quarter ended 30 December 2016 from the preceding three months. The average loan amount disbursed per account during the quarter stood at Rs20,981, lower than that in the preceding quarter (Rs21,469). In FY16-17, the average loan amount disbursed per account also reduced to Rs17,779 from Rs17,812 in the previous year. These trends suggest that the MFIs registered a decline in the number of clients, total loans disbursed, and average loan disbursed per account in the post-demonetisation period compared to three quarters in the pre-demonetisation period.

This is a clear indication of the reduction in outreach of microfinance as well as a potential decline in availability of credit to low-income households at a time when the prospects of the sector’s growth were high. Although we have not used data for the quarter ended 30 June, reported in the latest MFIN report, due to exclusion of eight SFBs that provide nearly 30% of micro-credit, there is a clear indication of stagnation of loan amount since the previous quarter and a growth slowdown in micro-lending. 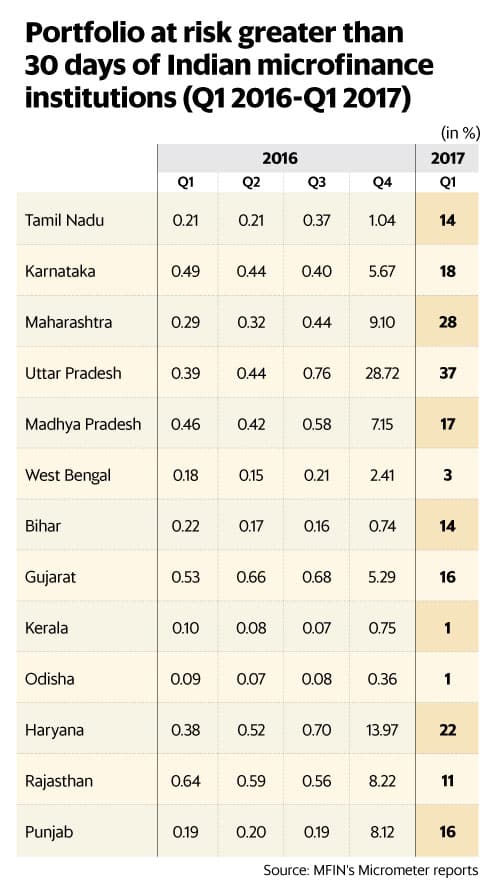 As shown in the table, PAR > 30 days has spiked drastically across most of the states. Compared to the figures for March 31, 2016, Uttar Pradesh and Maharashtra registered an incredible increase of nearly 100 times as on 31st March, 2017. States such as Rajasthan, Tamil Nadu, West Bengal, Gujarat, Punjab, Madhya Pradesh and Karnataka experienced increases between 11% and 22% compared to the much lower pre-demonetisation levels. By 31 December, PAR>30 days had increased from a meagre 0.5% in the previous quarters to around 8%.

In contrast to the figures for FY15-16, when the PAR figures remained under 1%, such high figures suggest demonetisation has dealt a blow to the loan repayment culture in micro-lending. Even if we consider the latest findings for the quarter ended 30 June that have certain data limitations, the risk for microfinance portfolios continue to be high despite minor improvement in repayment rates. In findings not reported here, states such as Kerala, Odisha, Assam, Bihar and Jharkhand have experienced modest increase in PAR>30 days that has remained under 10%. In terms of PAR>90 days and PAR>180 days, there is a similar trend but the order of magnitude is not as high. To make matters worse, rumours about loan waivers are believed to have aggravated the worsening collections in several regions.

These findings are worrisome. In contrast to the 2010 Andhra Pradesh crisis that began as a localized event and whose genesis went to a few years before the widespread crisis hit, the current crisis is a macro-political risk with stark unintended consequences for the sector that was showing signs of recovery from the 2010 crisis.

If MFIs, particularly the smaller MFIs, continue to experience worsening repayment rates and defaults, their sustainability is questionable. Bearing in mind the importance of microfinance for financial inclusion and livelihoods of a client-base of around 40 million, demonetisation has dealt a severe blow to the microfinance sector in more ways than one. It has considerably damaged the repayment behaviour and credit discipline that is central to the success of the microfinance model. Even if there is recovery in sight in the coming quarters, our findings highlight the tremendous stress that the sector has borne following demonetisation.