Reflections on investing in 2014

Well known American education reformer John Dewey rightly said, “We do not learn from experience...we learn from reflecting on experience." Dewey emphasized the natural form of learning from experience, by doing and then reflecting on what happened as the core to his approach to schooling. Reflection here refers to the deliberate process of assimilating and synthesizing the key lessons taught by experience. While Dewey may have made this statement in the context of improving learning at schools, it is just as relevant for us students of the stock market. Perhaps more important than reading the multitude of 2015 outlook reports or rushing for the next meeting with the chief executive officer of a company or for that matter reacting to the breaking news of the day, it is important to sit back and reflect what the ticker tape was trying to tell us as it went on its roller coaster ride in 2014. So, here are the 10 lessons that we learnt. Most of these, with the benefit of hindsight, may appear like time-tested lessons that might be just as relevant for any year, while some may be more unique to this year.

In the midst of the US Federal Reserve-induced taper tantrum that began in May 2013, the sole obsession of emerging market investors was the vulnerability emanating from India’s high current account deficit (CAD). India was admitted to the infamous Fragile Five Club, along with Brazil, Indonesia, Turkey and South Africa, all of which were supposed to share the common trait of elevated levels of CAD. A little over a year from then, the sentiment on India has done a complete 180-degree shift. Sentiment has improved manifold, thanks to a strong election outcome, lower levels of CAD and falling inflation. India’s currency has done relatively better compared to other emerging markets and the equity markets have been amongst the best performing in the world. The dialogue has shifted from high CAD to low crude oil prices, and from how India was most vulnerable, to how India is the biggest beneficiary amongst emerging markets.

After the election results in May, the popular Modi trade comprised buying stocks in state-owned enterprises, and in engineering, power, roads and other infrastructure sectors that were seen to be big beneficiaries of the policies of the new government. Most stocks that were considered to be the part of the Modi trade had their best performance in the 12 weeks leading up to the election results, but did not produce any eye-catching performance thereafter. It might have come as a surprise to many investors that healthcare has been the best performing sector since election results were declared on 16 May.

3. Don’t write off the local stories

While global markets remain highly correlated, every market offers some uniquely local opportunities. Companies in India that have built credible business models in products that cater to local tastes have seen significant wealth creation. In India, hair oil, for example, continues to register good volume growth despite naysayers predicting that the traditional habit of oiling hair will wane. Four Indian companies that are the dominant firms in hair oil market have seen their stocks return an average of 48% this year. Similarly, a supposedly inferior product such as air cooler outsells airconditioners by almost two times, and registered a much stronger growth rate despite the higher base. Symphony, the market leader in air coolers has seen its market capitalization rise by almost 100 times over the last five years.

Stock markets are typically considered to be a barometer of the underlying economy. However, markets generally attempt to predict where the economy is headed in the future, rather than the present. It is in this context that we saw a huge re-rating in the market in 2014, in anticipation of an economic recovery. In our interactions with senior management of companies we often hear the refrain that while their stock prices have moved up the acche din (good days) for their profit seems to be some time away. However most admit that the worst seems to be behind us, and that by itself has been a driver for re-rating of stock valuations.

5. Strong market performance does not equal a beta rally

Typically investors assume that in years when we have a strong market rally, the high-beta stocks would lead the list of out-performers. When we refer to high-beta, it includes what the market perceives as risky stocks, typically ones with weak balance sheets. This conventional belief was turned on its head this year. The stock-level performance attribution in 2014 reveals that the markets have witnessed a high quality rally. It was also a year when quality bubbles continued to inflate much to the chagrin of beta or value investors. In the BSE-100 Index, the top five stocks measured by return on equity (ROE)—a measure we have used to simplistically measure high quality—were up 36% on average, outperforming handsomely the top five high-beta stocks that were up only 10% on average.

6. If you get the theme right, sit tight

In investing, getting the theme right is more than half the job done. It makes the process of stock-picking infinitely easier when it fits a thematic framework. The aspirational consumer theme has played out to perfection in a stock such as Eicher Motors that makes the popular Royal Enfield brand of motorcycles. The waitlist of its popular Enfield motorcycle showed no signs of abating despite expanded capacity. No wonder the stock price of Eicher was amongst the best performing this year. As investors we constantly seek to unearth enduring themes that will produce lasting investment returns.

Investors have a tendency to look at the big winners of the previous bull market and assume that they would re-emerge as winners in the next bull run. Markets in their own characteristic fashion offer early signals that reinforce this flawed belief. Stocks that have been the biggest beneficiaries of the previous bull run, appear to be regaining their leadership status, but after recouping some lost performance quickly lose their sheen. Many investors tend to fall for this lure of mean reversion. In 2014, after showing some early signs of hope, the infrastructure and real estate related stocks, which were the leaders of the bull run from 2003-07, have started showing signs of fatigue. If history is a guide, the new leaders are unlikely to emerge from these sectors. Even if they do, it might be a different sub-segment of infrastructure—for example railways or ports, rather than power generation or real estate. The super-normal returns enjoyed by some of these sectors in 2003-07 are unlikely to repeat.

8. Beware of the narrative fallacy

India’s electoral outcome was far more favourable and decisive as compared to other emerging markets that had elections in 2014 (see table). However, commentators and investors had drafted their own script of what they thought Prime Minister Narendra Modi might do after assuming office. Nassim Nicholas Taleb, the author of the popular book Black Swan refers to this cognitive bias of storytelling as the narrative fallacy. 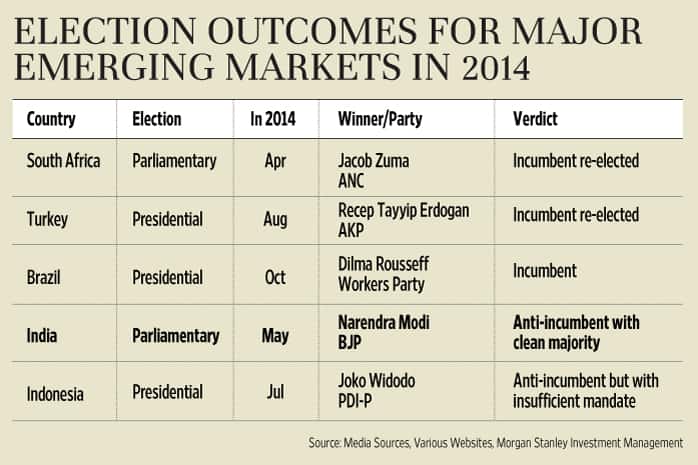 Modi has been compared to global leaders ranging from Margaret Thatcher to Lee Kuan Yew. Many now find that this fast and frugal heuristic to understand Modi was uni-dimensional and are getting disillusioned when they hear of Clean Ganga Movement instead of say, a visionary Eight Lane National Highway Programme. In short, sometimes even if you get the outcome of an event right, the story may not quite play out as per the script you had in mind. Conversely, many a times the small positive changes go unnoticed as we await big announcements. The monthly 50 paise per litre hike in diesel prices started by the previous government to cut the fuel subsidy burden was an effective one that stealthily achieved the desired objective.

Many investors were perturbed in mid-December when the steep fall in oil caused stress in the Indian markets. It is commonly believed that lower oil prices are good for India and we would see stocks rallying and a stronger currency. However, the way markets typically behave is that sharp corrections cause volatility and risks of a global contagion. Beneficiaries and losers of falling oil prices seem positively correlated during episodes of sharp volatility. It is only when things stabilize and the panic subsides that fundamentals come back into play. India too will eventually react to the positive fundamental benefits of lower oil prices, but only after the contagion risk in the world has abated.

In the end what mattered the most in 2014 was simple old-fashioned investing—to invest in stocks that had better earnings expectations. A look at the five best and worst performing stocks in the BSE-100 index, reveals that the former group had consensus one-year forward earnings upgrades of 40% while the latter group had downward earnings revisions. The top five returned 135% on average, while the bottom five were down 38%.

As we wrap up the year 2014 and strategize about how to position the portfolio in 2015, we are reminded of an interview of a well-known global sell-side equity strategist on a business channel a few years ago. The equity strategist known for his penchant for the long term, gave his prognosis on long term trends on inflation and employment in the US. Not quite satisfied that the long term world view would make for good viewership ratings, the enthusiastic interviewer asked him to predict the index level by the end of the month. The strategist quite peeved to hear this question, replied that in markets getting the direction right is tough in itself. If you get that right don’t bother with trying to predict the magnitude.

So while it may be the season for making index level predictions for 2015, we choose to go with the sage advice and instead prefer to just bet that the index level for end-2015 would be higher than end-2014! Season’s greetings and happy investing.