The state of Indian banks

Has the healing process finally begun in the wounded Indian banking sector? Two international credit rating agencies believe so. The past week has seen Moody’s and Fitch say in separate reports that the bad loans in Indian banks have peaked as a proportion of total loans. They believe that the extent of the problem will decrease as the cyclical economic recovery strengthens.

Most public sector banks, where most of the problem loans lie, had not announced results for the September quarter at the time of writing. But one did. Indian Overseas Bank said that it had to double its provisions against bad loans in the second quarter of the current fiscal year because of poor lending decisions. The financial results of the lender based in Chennai are one indication that the problems in Indian banks run deep. The more optimistic outlook by the two rating agencies should be seen against this backdrop.

The weakness in the Indian banking sector is clearly one of the most significant risks facing the Indian economy right now. Many would describe it as a soft underbelly. It is an issue that is almost inevitably raised these days in meetings with global investors. Policymakers, too, privately admit that one of their biggest concerns is the state of Indian banks. What the credit rating agencies seem to suggest is that the situation will improve from here—or at least not deteriorate further.

India had found itself in the list of the five most fragile economies in the world a couple of years ago because of its macroeconomic weaknesses: persistently high inflation, a record current account deficit and a large fiscal gap.

There has been a lot of improvement since then. The consolidated Indian fiscal deficit has come down, even though it is still around five percentage points higher than in other major emerging markets. But the other two indicators of economic imbalances are now under control. Inflation has subsided. The current account deficit is modest.

The risks have now shifted from macro to micro—specifically, the balance sheets of large companies as well as banks. The two are mirror images of each other. A borrowing binge on one hand was matched by a lending binge on the other. Bank credit during the boom years was growing at around 10 percentage points more than the underlying nominal gross domestic product. The end of the credit bubble inevitably left in its wake a pile of bad loans.

First, data from the International Monetary Fund (IMF) shows that the stressed assets of the Indian banking sector are far higher than in other emerging markets such as China, Brazil, Indonesia and South Africa 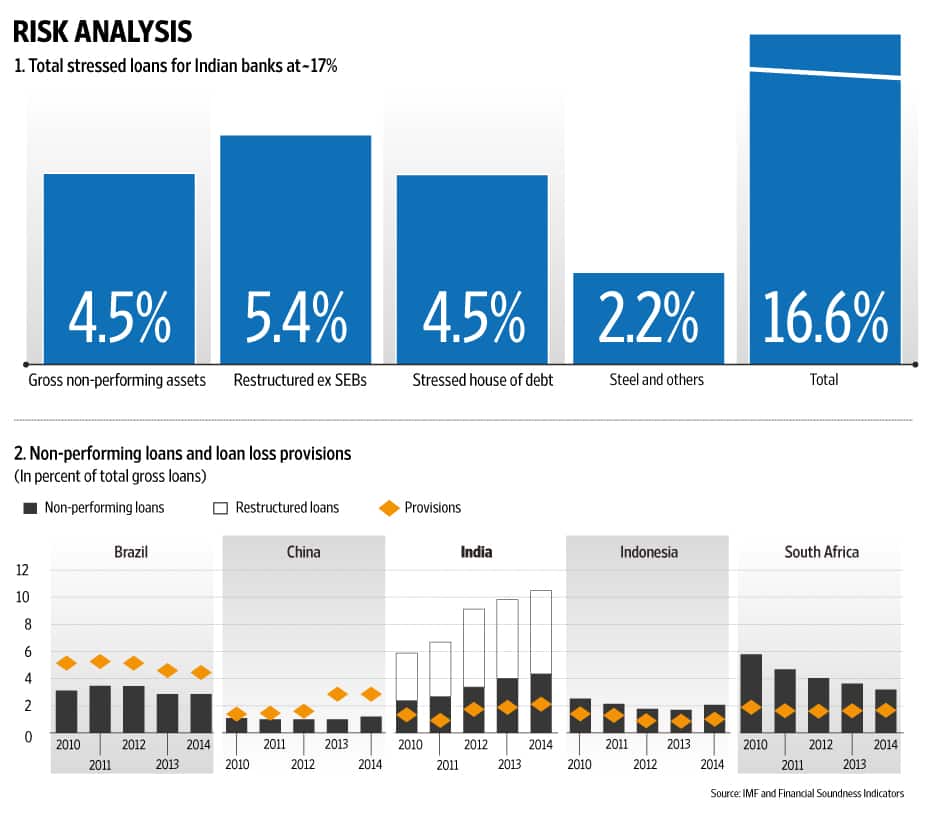 This number takes into account both the bad loans officially recognized in bank balance sheets as well as the restructured assets that should qualify as bad loans if the extraordinary regulatory forbearance provided by the Reserve Bank of India (RBI) is lifted.

Second, the latest edition of the explosive ‘House of Debt’ report by investment bank Credit Suisse also has a less sanguine view of bank balance sheets

The main thrust of the report is that the 10 most highly leveraged conglomerates continue to be weighed down by a mountain of debt.

The report points out that many of the loans given to these conglomerates have been shown as standard loans in bank accounts, but in fact between 35-65% of the debt of four business groups have already been downgraded to default status by credit rating agencies. After taking such accounting anomalies into consideration, Credit Suisse estimates that the actual proportion of stressed assets in the Indian banking sector is 16.6% of total loans, far more than the official figure.

The upshot: Indian banks already have some of the highest levels of stress among emerging markets even while analysts are pointing out that the reported levels of stressed loans could be an underestimate. So, even a gradual improvement in their finances will still not be good enough, especially if global investors become risk-averse in the coming months as US interest rates rise and the Chinese economy struggles. Some policy action is urgently required.

Neither Moody’s nor Fitch believes that the road back to a strong banking sector will be an easy one. The former says that it expects the recovery to be U-shaped rather than V-shaped, and that new loan impairment has started to come down even if total problem loans are still a challenge.

There are two fundamental ways in which a ratio such as stressed loans to total loans can be brought down—either reduce the numerator and/or increase the denominator. This is simple high-school arithmetic. But what it means is that the strategy to nurse Indian banks back to health will critically depend on both the ability of the banks to bring down their stressed assets as well as by growing their loan book through fresh lending.

One thing is obvious: both depend on a strengthening economic recovery.