Forty-one years after the first email was sent, Internet penetration in India is still terribly low. In fact, an industry insider said, “If you ask me truly, regular Internet users in India are not more than 10 million or so." In any case, from the claimed 100 million plus Internet users in India, more than 50% use Internet only a few times a year. Why does India continue to be more than 90% Internet-dark? Is it because Internet requires high literacy, education, and demands capacity to create content and publish them?

Yes, if we consider the rapid growth of television, radio and mobile. Mobile Internet users in India are more than 40 million, which, I am sure are not absolute but would have a significant overlap with ISP-based Internet users. Clearly, India being an oral country, it feels culturally more aligned to media that is oral, audio-visual and provides interactivity. No wonder, television has reached almost 150 million households out of the nation’s total of 213 million households. Mobile has already crossed 900 million. Radio claims 95% coverage, and as far as usage is concerned, there are more radio listeners today than ever before because of rapid FM radio proliferation and mobile devices having FM-receiving features. 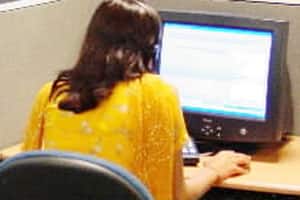 There is a serious lack of awareness about Internet among all the villages of India. Among the thousands of villages I have visited in the past several years, there is only one suburb that I can talk about where Internet is a complete culture, broadband access is available, and access to interactive media like Internet is a regular practice. The place is McLeodganj, perhaps because of the 10,000 plus Tibetans who have made it their home. Recently, I stayed at a home in Dharamkot, 2km from McLeodganj, for a week, where I found that each home has a home-stay facility, each house has Wi-Fi Internet connectivity, every nook and corner has cyber cafés and every restaurant provides free wireless Internet access. The reasons for pervasive Internet culture here is because it is a tourist destination popular with post-military-trained Israeli youths who regularly come here for long stays and politically active Tibetans.

The approach of the Dalai Lama, who has 3.8 million followers on Facebook and 4.5 million on Twitter, is highly efficient in integrating information and communications tools, Internet, Web, video conferencing, webcasting, use of FM in closed circuit broadcasting in multiple languages, and even uploading all content on the Web in almost real-time. If you go to dalailama.com, you will browse a website with tremendous amounts of information, archive, videos, photos and news updates.

Students for a Free Tibet (SFT), a non-registered NGO in McLeodganj, uses broadband Internet access to reach out to the Chinese masses, giving them an opportunity to learn more about the Tibetan cause and messages from the Dalai Lama. Using proxy services, SFT volunteers use Yahoo messenger to chat with 90 people at a time, along with using sources such as Twitter to update the Chinese on their opinions, protests and the latest news. Although more often than not the Chinese avoid such interactions, they have still managed to reach out and interact with 90,000 of them.

The Internet culture prevalent in McLeodganj spans across the entire Dharamshala area, spread across 70km. Using mesh networking provided by AirJaldi Networks, a broadband service of Rural Broadband Pvt. Ltd, the network is catering to more than 10,000 people in the hills of Dharamshala.

If we have to make the Internet proliferate, it has to be adopted as extended culture of the communities and the best route is to go broadband and use the mobile and wireless as vehicles to make Internet a household infrastructure.