The year 2018 has started like 2017 ended. The synchronized global recovery continues in earnest, yet markets remain sceptical of Fed normalization. Only 60 basis points (bps) of hikes have been priced in for 2018, even less than was delivered in 2017, despite the US unemployment rate now at just 4.1%.

In India, too, 2018 has started like 2017 ended, but from the opposite end of the spectrum, with concerns about growth underperformance and an impatience to get growth back on track.

India’s angst is understandable. In a year when the global economy grew at its fastest clip in seven years, Indian growth is on course to slowing down to a four-year low. Some of this is undoubtedly temporary goods and services tax (GST) related adjustment costs. But, equally, net exports—which should have been a big tailwind in 2017—turned out to be a big headwind. Imports accelerated sharply as domestic supply chains likely got disrupted on the back of demonetization/GST. Some have argued that the import strength was simply driven by prices, not quantities, and that strong imports were, in many cases, pulled in by strong exports. But the Central Statistics Office’s (CSO’s) recently released gross domestic product (GDP) estimate does not bear this out. “Real" imports are estimated to grow at almost 10% this year versus less than 3% last year, despite much-softer domestic demand. In contrast, real exports are estimated to grow at just 4.5% in 2017-18—the same as last year—despite a much stronger global environment, which is both disappointing and confirms stronger imports were not pulled in by stronger exports. Consequently, net exports shaved off a whopping 120 bps from growth in 2017-18.

To be sure, the high-frequency data suggests growth is now lifting. But even if 2017-18 growth were to eventually end up slightly higher than the CSO’s 6.5% estimate, there will be much help from a very favourable base effect in the last quarter. Furthermore, the labour-intensive sectors—agriculture, construction, small and medium enterprises—are under the most stress, likely explaining why rural wage momentum has softened materially in recent months. All this creates unique political-economy pressures in a pre-election year.

What everyone is hoping and banking on is that India’s growth accelerates, possibly materially, in 2018-19. But the key—which is surprisingly absent in most growth debates—is crude prices. With Brent at about $70/barrel, crude is now up almost 40% since September. This constitutes a sharp, negative term of trade shock for India. Recall the collapse in crude in 2014-15 boosted growth by 100-150 bps. Rising crude prices will now generate some growth payback, by pressurizing the fisc (crowding out other spending); pressurizing inflation (depressing household purchasing power), and driving up input costs prices (squeezing firm margins and profits). If oil stays at $70, we estimate the negative terms of trade shock will dampen growth by 40-50 bps in 2018-19. To be sure, rising oil prices are also symptomatic of stronger global growth. So India’s exports should continue picking up. But the net-export boost would need to be substantial to offset the oil impact, and deliver a meaningful growth acceleration. If growth were to disappoint again in 2018, the political-economy pressures are only going to rise. Already, some commentators are calling for substantially relaxing the fiscal path, and there are understandable pressures to reflate the rural economy.

But this is where 2018 differs from 2017. The near 40% increase in oil prices in recent months has dramatically constrained fiscal and monetary policy space and eroded the macroeconomic buffers that existed. Now, any growth impatience or policy adventurism runs the risk of spilling into macroeconomic instability. But, where are the pressures? What’s different from a year ago?

The most visible manifestation of pressures is the government bond market. Bond yields have seen an unabated sell-off over the last four months, with yields hardening almost 100 bps. With the 10-year yield close to 7.4%, against the policy rate of 6%, this is among the steepest yield curves over the last seven years in non-crisis periods. 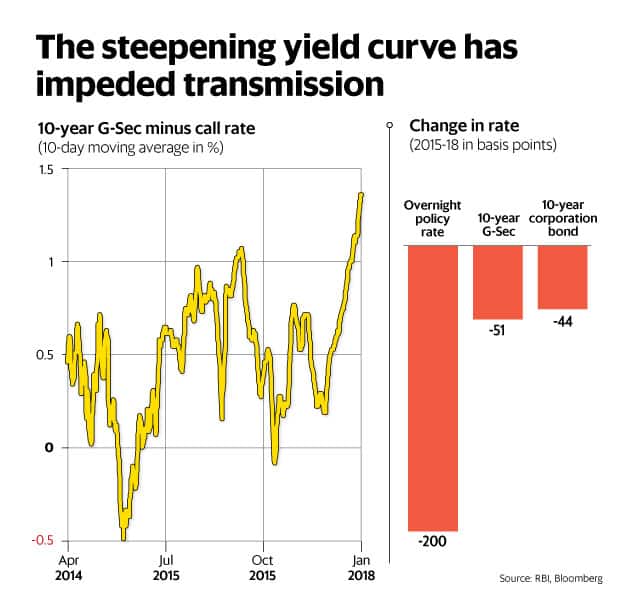 What’s driving this? Largely, fiscal exhaustion. With the Centre borrowing about Rs600 billion more than budgeted, state market borrowing more than doubling over the last four years and increasing another 15% this fiscal, and the Reserve Bank of India (RBI) undertaking Rs900 billion of open market operation (OMO) sales this year (to sterilize its spot foreign exchange purchases), versus OMO purchases of Rs1.1 trillion last year, net supply of state and Central government securities (G-Secs) that markets face is 50% higher in 2017-18 compared to last year. Markets are struggling to absorb this and supply-demand dynamics in the bond market are very adverse.

To be sure, some of the supply pressures are on account of the RBI’s OMO sales in 2017-18. But there is no free lunch here. Faced with a large balance of payments surplus, the alternative was to accept more rupee appreciation (and face heightened concerns about rupee overvaluation) or to intervene more aggressively in the forward market, creating financial stability concerns.

The second impact is on debt dynamics. If bond yields remain at these elevated levels, government debt/GDP gets stuck close to current levels, assuming the current primary deficit and nominal GDP at 11%. Conversely, if yields were 75 bps lower, debt to GDP consistently declines.

Despite slowing growth in 2017-18, India’s CAD is on course to tripling from last year, with CAD expected to print close to $50 billion or 2% of GDP, both because of higher oil prices and because non-oil, non-gold imports significantly outstripped exports this year. Now, if oil remains at $70/barrel, CAD would widen to a five-year high of about $75 billion or 2.7% of GDP in 2018-19— above the 2.5% of GDP threshold generally considered sustainable.

Consequently, India’s basic balance (foreign direct investment minus CAD) is on course to going from a surplus of $20 billion in 2016-17 to a deficit of $35 billion in 2018-19. Furthermore, almost 40% of India’s capital inflows in 2017 was interest-rate-sensitive in nature. The widening CAD will increase the reliance on these flows. But can we rely on these if US rates go up sharply in 2018 and the interest rate differential narrows?

With the CAD widening, why is the rupee under sustained appreciation pressures? Largely on account of the weak US dollar, which has created appreciation pressures across emerging market currencies. If the dollar were to stabilize or strengthen in 2018, and US rates were to increase, the risk that the BoP surplus shrinks dramatically is rising. That said, the RBI’s war-chest of forex) reserves provides much comfort.

Finally, one risk that has been creeping up under the radar is firming core inflation. The cleanest measure of core inflation (headline adjusted for food, fuel, gasoline, diesel, and housing to net out the house rent allowance impact), has increased sharply for four successive months, growing 0.5% month on month per month since September—an annualized rate of 6%. It’s hard to ascribe recent momentum to GST tax changes back in July, especially since GST rates have largely been cut since October. Instead, this largely reflects commodity-induced cost-push inflation combined with firming demand.

More worrying, oil at $70 is not yet in the price. Pump prices are being raised slowly but will need to go up significantly to be commensurate with current oil prices. So there is another shoe still waiting to drop on core inflation.

Headline inflation is likely to soften in the coming months on falling food prices, but the sustained increase in core inflation will worry the monetary policy committee, imperil the medium-term target, and significantly reduce degrees of freedom for monetary policy.

All told, oil at $70 significantly complicates the macroeconomic outlook. Against this backdrop, India must not get complacent. An impatience for higher growth or policy adventurism, in the current environment, risks spilling over into macroeconomic instability. Discretion is the better part of valour. With the implementation of the bankruptcy law, GST and bank recapitalization, 2017 was the year of valour. 2018 needs to be the year of discretion.

Sajjid Z. Chinoy is chief India economist at JP Morgan. These are his personal views.