The fiscal company we keep

Ahead of the Union budget, a look at the countries India can compare itself with in fiscal matters

On the eve of the Union Budget, let’s take a look at the countries India can compare itself to in fiscal matters. Let’s consider government revenues as a percentage of gross domestic product (GDP) as a yardstick. According to data from the International Monetary Fund (IMF), government revenues in India (including those of the states) are around 20% of gross domestic product. That puts us in the same league as Ghana, Kenya, Mali, Myanmar, Nepal and Rwanda. That is hardly comforting. All these countries’ income per head is substantially lower than India’s. Indeed, Mali, Nepal and Rwanda have per capita incomes less than half of India’s. The question for the finance minister is: Do we really want to belong to this group? 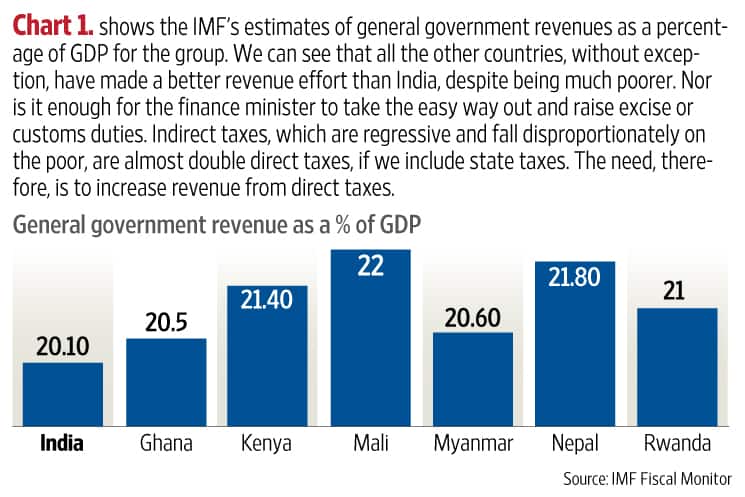 Chart 1 shows the IMF’s estimates of general government revenues as a percentage of GDP for the group. We can see that all the other countries, without exception, have made a better revenue effort than India, despite being much poorer. Nor is it enough for the finance minister to take the easy way out and raise excise or customs duties. Indirect taxes, which are regressive and fall disproportionately on the poor, are almost double direct taxes, if we include state taxes. The need therefore is to increase revenues from direct taxes.

Can we at least raise our revenue-to- GDP ratio to Rwanda’s levels? 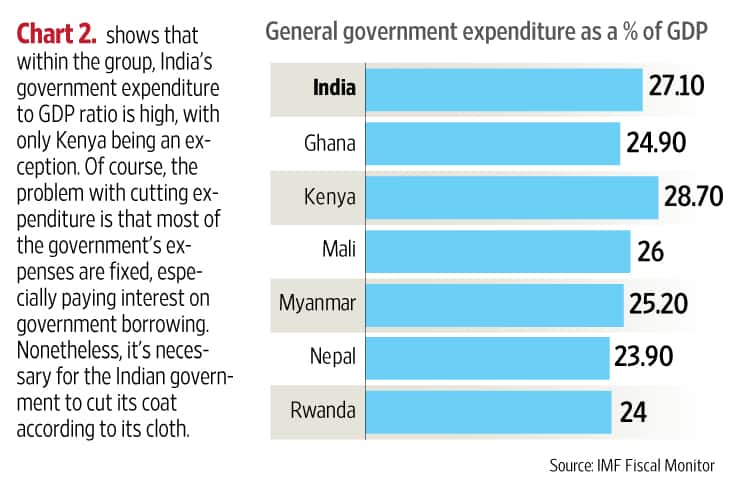 Chart 2 shows that within the group, India’s government expenditure-to-GDP ratio is high, with only Kenya being an exception. Of course, the problem with cutting expenditure is that most of the government’s expenses are fixed, especially paying interest on government borrowing. Nonetheless, it’s necessary for the Indian government to cut its coat according to the cloth. 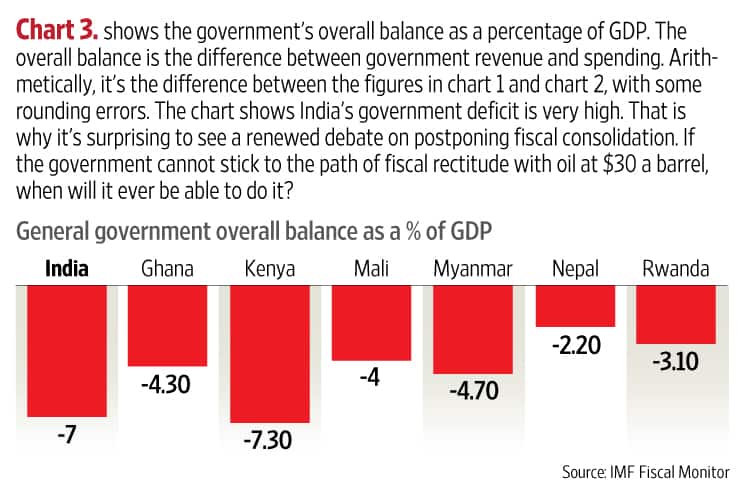 Chart 3 shows the government’s overall balance as a percentage of GDP. The overall balance is the difference between government revenues and spending. Arithmetically, it’s the difference between the figures in chart 1 and chart 2, with some rounding errors. The chart shows India’s government deficit is very high. That is why it’s surprising to see a renewed debate on postponing fiscal consolidation. If the government cannot stick to the path of fiscal rectitude with oil at $30 a barrel, when will it ever be able to do it? 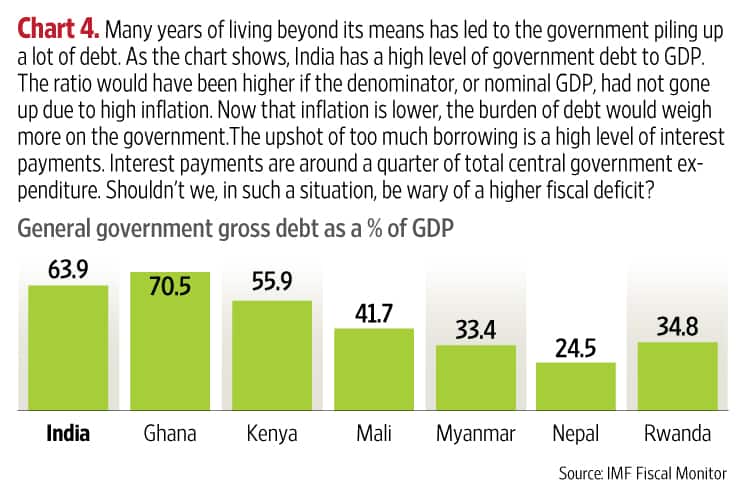 Many years of living beyond its means has led to the government piling up a lot of debt. As the chart shows, India has a high level of government debt to GDP. The ratio would have been higher if the denominator, or nominal GDP, had not gone up due to high inflation. Now that inflation is lower, the burden of debt would weigh more on the government.

The upshot of too much borrowing is a high level of interest payments. Interest payments are around a quarter of total central government expenditure. Shouldn’t we, in such a situation, be wary of a higher fiscal deficit? 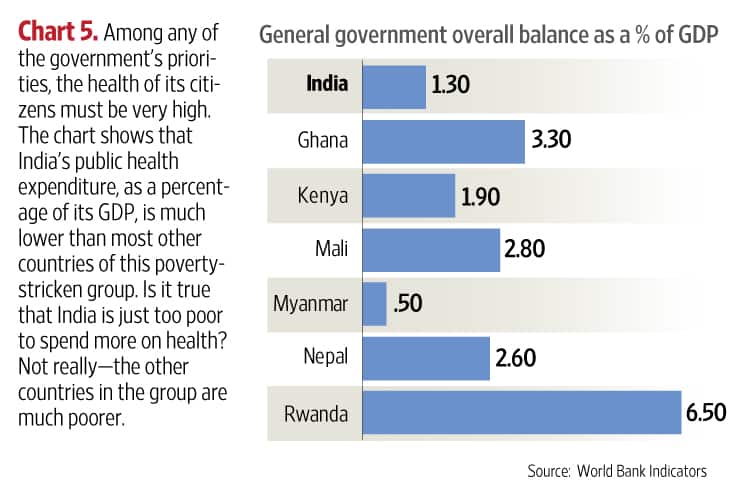 Among any government’s priorities, the health of its citizens must be very high. The chart shows that India’s public health expenditure, as a percentage of its GDP, is much lower than most other countries of this poverty-stricken group. Is it true that India is just too poor to spend more on health? Not really—the other countries in the group are much poorer. 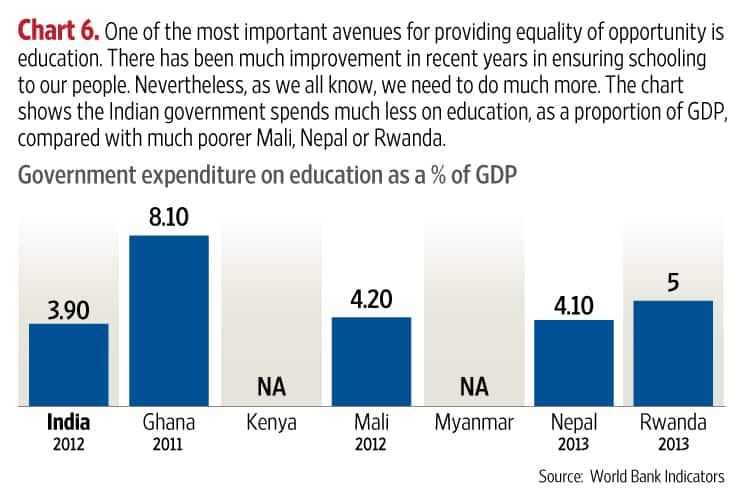 One of the most important avenues for providing equality of opportunity is education. There has been much improvement in recent years in ensuring schooling to our people. Nevertheless, as we all know, we need to do much more. The chart shows the Indian government spends much less on education, as a proportion of GDP, compared to much poorer Mali, Nepal and Rwanda.