How much of India is poor? And by how much has that number reduced over the years? This is an old debate and the answers to these questions vary greatly depending on the choice of the survey method and the poverty line.

According to official statistics, India’s poverty rate declined from 45% in 1993-94 to 22% in 2011-12. However, the poverty lines used to determine the above poverty figures have been criticized as being too low to allow a decent standard of living. The Planning Commission deemed anybody to be non-poor if he or she could spend ₹ 27 per day in rural areas or ₹ 33 per day in urban areas in 2011-12.

A new database, Global Consumption and Income Project (GCIP), suggests that the official figures might be understating the extent of poverty. Even if one adopts a slightly more charitable poverty line of around ₹ 38 per day for 2011-12 (i.e. $2.5 per day in purchasing power parity terms), the poverty rate would be 47%, more than double the official statistics. The GCIP database – which is the result of research by Arjun Jayadev, Rahul Lahoti and Sanjay G. Reddy, economists at University of Massachusetts Boston, University of Goettingen and The New School for Social Research (New York) respectively – further shows that even the World Bank might have underestimated poverty in India, partially owing to differences in how purchasing power parity (PPP) indices were used.

Although the GCIP provides data till 2015, numbers after 2012 should be taken with a pinch of salt, notes Sanjay G. Reddy, himself a part of the GCIP team. That’s because the measures for the latest years have been calculated by combining growth data with an unchanged distribution.

Nevertheless, what is undeniable is that poverty has reduced substantially in recent years, irrespective of the poverty line adopted. However, while poverty might have come down, it doesn’t necessarily mean that inequality has reduced. 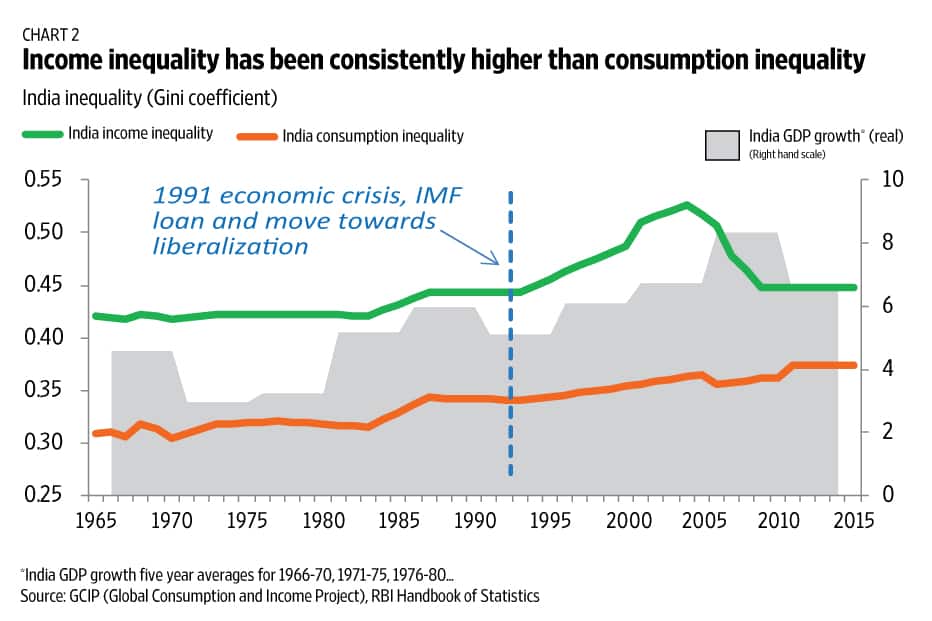 Inequality worsened in the post-reform period

Data shows that inequality has worsened in the post-reform period in India, which is likely to add to the voices of those arguing against ‘neoliberal’ policies like privatisation and globalization. However, India is not alone in that aspect. Data shows that inequality did worsen in the US and UK during the 1980s under the governments of Ronald Reagan and Margaret Thatcher respectively, both of whom are often perceived to have been committed to ‘neoliberalism’ or to have harboured a preference for ‘free market’ economics over government intervention. Data from certain Latin American countries like Chile, which allegedly adopted neoliberalism in 1970s, also shows rising inequality in that period. 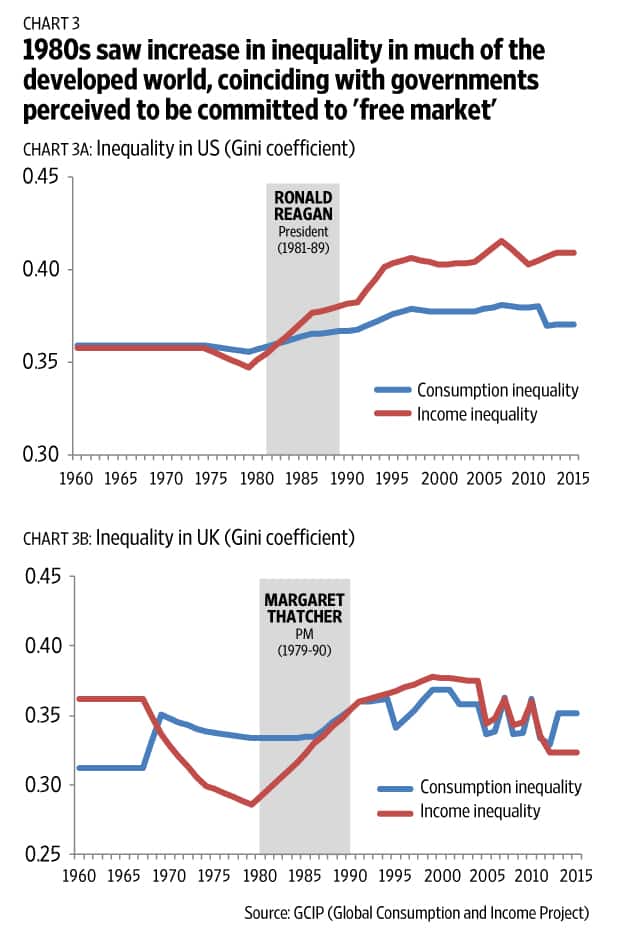 That doesn’t necessarily mean that richer countries are necessarily more unequal. Correlation does not imply causation. There are many countries, especially in Africa, which show much higher inequality than the above discussed countries, despite not being generally associated with the kind of neoliberalism that was introduced in 1970s or 80s to Latin America or the US or UK.

Moreover, the classic Kuznets curve hypothesis does not seem to hold, as inequality does not seem to rise with rising incomes. The once-popular Kuznets curve hypothesis had suggested that as poor countries experience economic growth, they are liable to witness increased inequality in the initial years before slowly moving towards a more equal society. If the hypothesis was true, then the most unequal countries should have been the middle-income ones and the plot of inequality vs. income should have yielded an inverted-U curve. However, that is not the case and the most unequal of the countries, income-wise, are also generally the poorest.