The rupee, the dollar and RBI

The rupee, the dollar and RBI

In its worst weekly performance in the past nine months, the Indian rupee declined 3% and eventually closed at a record 57.15 against the dollar on Friday. Almost inevitably, the focus is back on the Reserve Bank of India (RBI); and, if outgoing finance minister Pranab Mukherjee’s bluster is to be believed, there will be some serious policy action today from the central bank that will restore the rupee’s mojo. 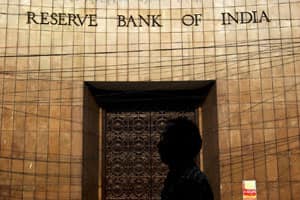 It is effectively undertaking measures that will in the medium term boost net foreign currency inflows into the economy— through actions such as the additional liquidity for exporters announced in last week’s review and letting the rupee drift downwards—and at the same time taking measures to restrict action in the foreign currency markets so that it can influence the value of the rupee with minimal interventions.

The policy review, if read between the lines, made clear that RBI, unlike the flutter it has created among the political and chattering classes in Delhi, is not very uncomfortable with the domestic currency gyrating around 55 to a dollar. “One implication of the rupee depreciation over the past several months is that domestic producers have gained in competitiveness over foreign producers. Over time, this should (by making exports cheaper and imports costlier) result in expanding exports and contracting imports, thus acting as a demand stimulus," the policy review said.

Underlying this policy action, like always, are some bets; some reasonable, the other risky and, consequently, with attendant problems.

The most reasonable assumption that the central bank has made, despite claims to the contrary from New Delhi, is that there is unlikely to be any immediate serious action on the fiscal deficit—which effectively puts the brakes on any effort to reduce the policy rate with retail inflation in double-digit territory. Given the macroeconomic circumstances, it is RBI’s calculation that cutting interest rates would not revive the economy, but worse, risk inflation going into a spiral.

On the other hand, RBI has beginning last year progressively put curbs on the foreign currency market, primarily designed to reduce the velocity of transactions. The logic is simple; it allows RBI more bang for its buck during its interventions in the market. But what it is doing is that it is distorting true price discovery.

Consequently, it is no surprise that rupee-dollar hedge trades are increasing offshore. While data on the non-deliverable forward markets in Singapore is not available, the data put out by the Dubai Gold and Commodity Exchange (DGCX) is revealing. In May, DGCX accounted for 16% of the total dollar-rupee futures volumes; it was about 5% in June last year. The risk of RBI persisting with its ways can result in the emergence of a dual exchange rate and attendant distortions.

Another risky bet RBI seems to be taking by calibrating the economy to a weaker rupee is the assumption that the global economy will not soften dramatically and hence exports will ride on a depreciating rupee.

Europe has been hovering on the brink of a crisis for nearly a year now (weakening oil prices suggest that the world economy is likely to slow); the volatile situation in West Asia with Syria all but succumbing to a civil war is an additional imponderable; not to speak of the eyeball-to-eyeball confrontation between Iran on one side and Israel and the US on the other that could potentially go out of hand—any of these could trigger a global meltdown and overturn expectations of robust exports.

We don’t have it on record, but clearly the central bank, with its back to the wall, is probably looking at its moves on the external sector as an interim measure—after having reached the limits of its intervention in the economy through interest rate changes.

The risks underlying the manoeuvre once again highlight the point that the Union government has to get its act together, sooner and not later. It has dithered for too long, only supporting itself with tall claims. The United Progressive Alliance government has to move quickly to resolve the policy imbroglio as well as putting a credible fiscal correction plan in place.

It will immeasurably strengthen RBI’s hands, not just in its fight in containing inflation, but also in mitigating external sector risks flowing from a potential global contagion.