The final quarter of 2017 revealed that states, small and large, took measures to stand out as champions of innovationboth for entrepreneurs and industry looking to grow

In the final quarter of 2017, India’s ruling political party gained control of one more state legislature and retained control in another—Himachal Pradesh (HP) and Gujarat, respectively. Yet, this came with a hint of caution: Central government-led reforms may need to decelerate in the coming year in order to focus on improving the livelihoods of the rural electorate before the 2019 general election. In November, India also hosted the first Global Entrepreneurship Summit (GES) of the Donald Trump administration. Global visibility and the focus on entrepreneurship percolated through India’s states. The Wadhwani Chair analysis of important reforms from October through December reveals that states focused on entrepreneurship, skill development and policies aimed at boosting industrial growth through land and labour reforms and policies to support manufacturing. All of these sectors are critical to ensuring that India has a skilled workforce and can support innovative entrepreneurs and industries that need room to grow. 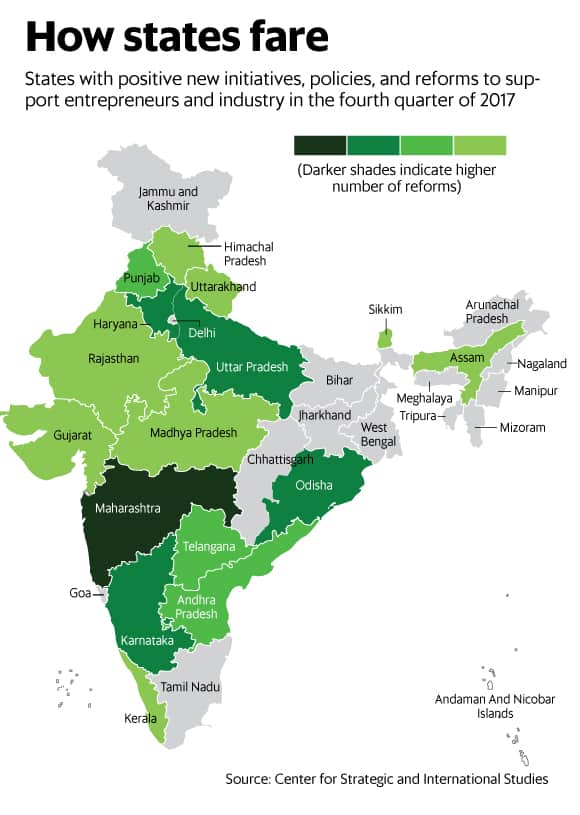 Among India’s states, there were different levels of commitment to enacting reforms in the final quarter of 2017. Eight states, ranging from Sikkim to Gujarat, passed at least one reform or enacted at least one policy or programme to aid in the skilling or educating of their citizens or to improve the business environment for industry by enacting land, labour or other business-friendly reforms. The next grouping of states comprises Punjab, Telangana and Andhra Pradesh (AP), with each enacting between two-three such measures. A larger pool of states consisting of Karnataka, Odisha, Uttar Pradesh (UP) and Haryana took four-five such measures while Maharashtra enacted eight.

■ Telangana announced the creation of an innovation hub to be called WE-Hub, modelled after the successful T-Hub, exclusively for women and backed with a $2.5 million investment fund.

■ Rajasthan launched iStart, a programme that will nurture registered start-ups by providing them with business plan assessments, skill building, mentoring and connections to potential investors.

■ Odisha doubled the number of years during which a business can qualify as a start-up, from five to 10.

■ Maharashtra approved an industrial policy for women entrepreneurs that is backed by $100 million in subsidies to be offered to female-fronted start-ups, starting 2018.

■ By revising its IT policy to align with the national Startup India mission, the Kerala government will provide greater incentives to start-ups in the state and make it easier for private firms and international agencies to set up incubators and accelerators.

■ UP announced its IT-led start-up policy, which aims to develop IT parks in tier II and III cities and develop investment nodes in the state that enable the use of smart technologies for better city management and access to public services.

■ Supported by $4.8 million in funding, Haryana’s state agencies agreed to hire 15,000 apprentices by 1 December under the National Apprenticeship Promotion Scheme.

■ Himachal Pradesh is set to receive an $80 million loan from the Asian Development Bank and $20 million from the Centre to modernize the state’s technical and vocational education and training institutions.

■ Andhra Pradesh and Mastercard signed an agreement to create a centre for excellence in order to enhance financial and digital literacy.

■ Maharashtra decided to pay owners of non-agricultural land the same premium when purchasing land for government use as is currently paid to owners of agricultural land. This is intended to make it easier to acquire land for infrastructure projects.

■ Haryana passed the Consolidation of Project Land Bill, which makes it easier to consolidate scattered tracts of land into a single large plot. In addition, the state cabinet approved the Right to Fair Compensation and Transparency in Land Acquisition, Rehabilitation and Resettlement Rules.

■ Uttar Pradesh and Odisha announced the creation of land banks of 5,000 acres and 120,000 acres, respectively, for allocation to the industrial sector.

■ Maharashtra cleared a change to the Industrial Disputes Act to allow businesses with less than 300 workers to shut down or lay off workers without seeking government permission.

■ In Punjab’s new industrial and business development policy, industrial power tariff was frozen at Rs5 per unit for five years.

■ Maharashtra decided to offer exemptions from stamp duty and registration fees for 25 years for businesses and manufacturing units operating in special economic zones.

Kartikeya Singh is deputy director and fellow, Wadhwani Chair in US-India Policy Studies, at the Center for Strategic and International Studies.