When ‘average’ income is not available to average individual

New Delhi: Every high school student knows that arithmetic mean—the most popular method to compute averages—can be distorted by extreme values that are very much larger or smaller than most other values in a series. Since per capita income calculations are arithmetic mean-based, they also suffer from this handicap. Hence, it might be misleading to believe that mean incomes would capture the well-being of the average individual—those who are in the middle of the income distribution—in a country. A better way of finding out this is to use median income levels. In statistics, median is meant to capture the value of the middle item in a distribution.

Although CGD statistics do not allow a more comprehensive international comparison, we do have data on median incomes for states in India. The Indian Human Development Survey (IHDS) 2011-12 has given median income estimates for states. How does the mean-median income gap look for Indian states? 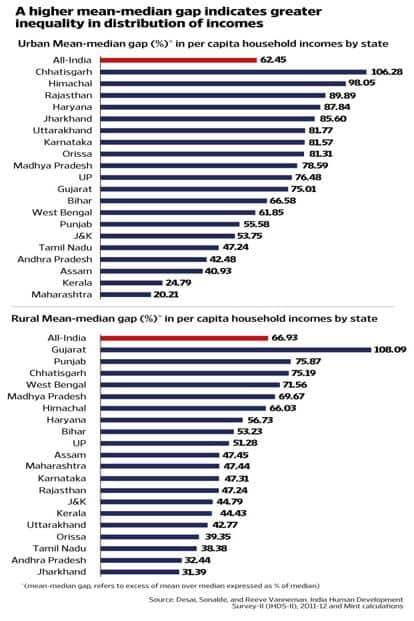 Mean incomes are higher than median incomes in almost all states, suggesting that income distribution is skewed towards the rich. However, there is a more interesting way to use these two statistics.

Generally, per capita incomes are taken as an important indicator of the material well-being of their people. How would this picture change after taking median incomes into account? For urban areas, higher mean income for a state does not always translate to higher median income. For instance, although Rajasthan has higher mean per capita household income of around ₹ 39,500 per year compared to Andhra Pradesh’s ₹ 30,000, its median income was lower than that of Andhra Pradesh. Similarly, while Gujarat and Kerala have around similar levels of mean income, urban Gujarat exhibits lower median income than urban Kerala. This means that the average Gujarati is not as better off as he is made to be, while the reverse is true for the average Malayali.

This is not to say that higher mean incomes should necessarily be seen as evidence of higher inequality. Mean-median gap and mean incomes for states show insignificant correlation in both rural and urban areas. 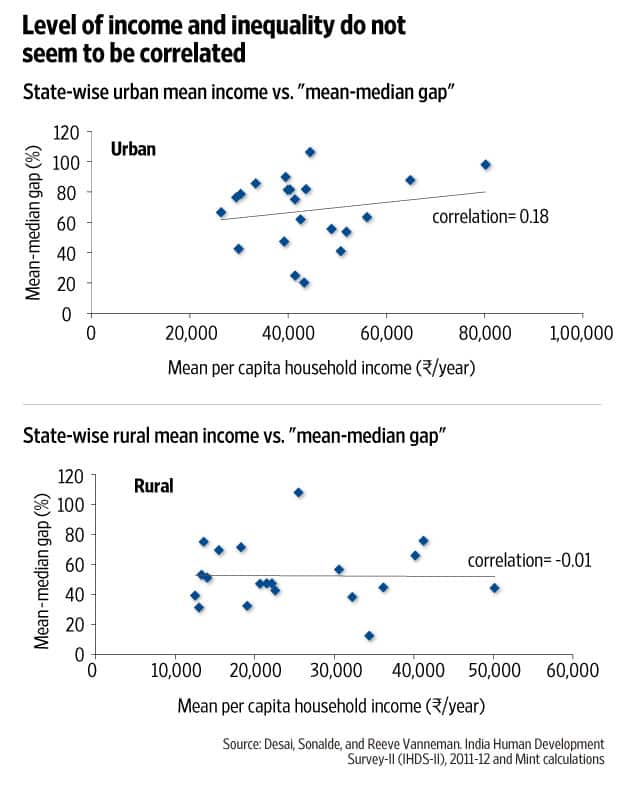 The median income statistic and the results its comparison with mean incomes gives advocate further sobriety in treating mean incomes as the only goal which policymakers should be chasing. At the same time, there is also a need to adopt a more multi-dimensional approach to analysing inequality, given the low correlation between mean-median gap and mean incomes.