"storyDirectUrl"
OPEN APP
Home / Opinion / How much land is actually cultivated in India?

How much land is actually cultivated in India?

New Delhi: How much land is actually cultivated in India? Depending on the data source, you might have to give or take the total area of France.

Consider this: The latest National Sample Survey Organization (NSSO) report on land and livestock holdings estimates that around 95 million hectares of land was classified as operational holdings in 2012-13. Operational holdings are land that was used wholly or partly for agricultural production. While this includes land being used as kitchen garden or livestock growing, it leaves out cooperative farming and institutional/government ownership.

The NSSO figure is about 65 million hectares lower than the numbers put out by the ninth agricultural census conducted in 2010-11. The census, conducted by the ministry of agriculture, says that total area under operational holdings was 159.6 million hectares.

Sure, there are differences between the two surveys in collecting information. The agricultural census is primarily based on land records with states, except some including West Bengal, Odisha, and Kerala where these are not available. In such states, a household survey is carried out, but this category constitutes only 9% of the total operated area in the country. The agricultural census’s definition of operational holdings is also broadly similar to NSSO’s.

While the divergence between the two estimates is not new, it has increased in the last two decades. The increasing gap is largely on account of a sizeable decline in NSSO estimates. 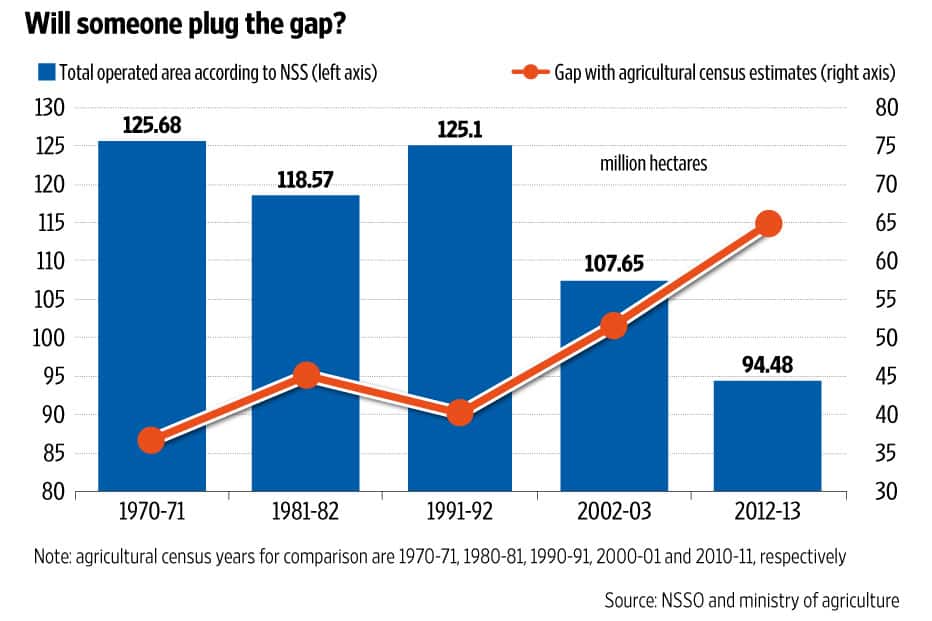 Himanshu, associate professor of economics at Jawaharlal Nehru University, says that the NSSO report probably indicates that active participation in farming is declining. Households, including absentee landlords, might be shown operating agricultural holdings in land records, but they might not be engaged in farming anymore, which is reflecting in NSSO surveys, he added.

Indeed the agricultural census admits that the situation reflected in land records might be different from the actual situation on ground.

A comparison of NSSO and agricultural census data on distribution of operational holdings by size class seems to support the claim that the latter might be based on dated estimates. The agricultural census figures seem to overestimate the share of larger sized holdings. The discrepancy is greatest in operational holdings of size class of more than 10 hectares. It is quite possible that NSSO data might have captured the relatively recent division of land holdings which are still not reflected in official land records. The glaring divergence in estimates of agricultural land is not of academic interest alone. The government is readying itself to roll out direct benefit transfers (DBT) in place of input subsidies for farmers. Given such large-scale differences in estimates of agricultural land, according to its own data, and the number of people dependent on each tract, deciding on the scale and quantum of DBTs might become a difficult issue in the days to come.