A proclamation of surplus power across India has underlined the progress (and pitfalls) of the power sector in recent years. For decades, the country has been reeling under persistent deficits in peak power and overall energy supplied. Notwithstanding the demand for power, from the millions yet to be connected to the grid, this surplus is an opportune moment for the thermal power sector to overhaul the power procurement process and improve overall efficiency. Power procurement expenses constitute more than 70% of the cost base of most distribution companies (discoms). Reducing this burden will go a long way in addressing their financial woes.

As of 31 March, India had an installed generation base of 327GW, of which coal accounted for nearly 192GW. The peak demand for 2016-17 was only 156GW. Factoring in a plant availability (accounting for planned maintenance and contingencies) of 85%, auxiliary consumption (within the power plants) of 7%, and nominal transmission and distribution losses of 20%, coal alone could theoretically contribute to 121GW of the peak demand. This surplus is likely to persist, given the pipeline of projects that are already contracted and under construction.

Recent opinion pieces and the Economic Survey 2016-17 suggest that renewable energy (RE) generation is imposing an inordinate social cost and is resulting in stranded thermal-generation assets. Even if we discount RE sources, and moved all the generation they contribute to coal power stations, the overall plant load factor (PLF) would only go up by 3.9%. Clearly, the issue of current low utilization and stranded assets needs to be dealt with in a more comprehensive manner without making RE the scapegoat.

There are significant gains to be had from rationalizing procurement just from the coal-based generation assets.

A bulk of the power procurement (~90%) by discoms is through long-term power purchase agreements (PPAs) with generators, and intra-state short-term purchases. Though the Electricity Act (2003) promotes competitive procurement of electricity by discoms, many of the existing PPAs did not necessarily reflect the best available price (even when they were signed) and certainly do not make economic sense today, given the stock of efficient and lower cost thermal-generation assets. An analysis by the Council on Energy, Environment and Water (CEEW) indicates that nearly 48% of the generation from the cheapest sources (see chart) was left unutilized. This is primarily a reflection of the way current PPAs are structured and the rigidity they impose on procurement. 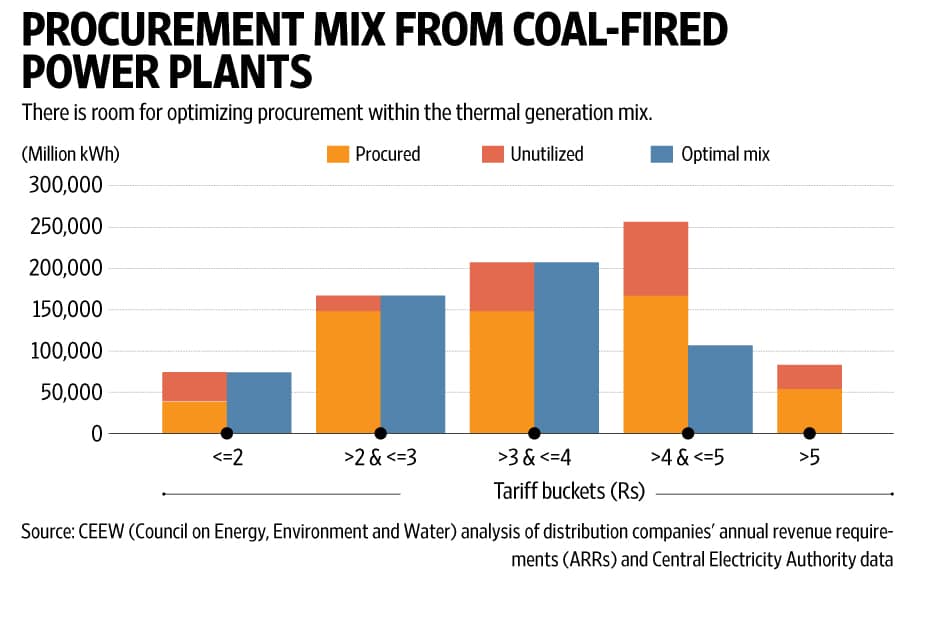 The analysis suggests that there is room for optimizing procurement within the thermal generation mix. It was found that generation sourced at prices higher than Rs4 could be reduced by as much as 50%. The current procurement mix costs electricity consumers annually Rs29,300 crore more than the optimal mix.

It was also found that the more expensive plants are also the more inefficient ones. The plants in the lowest tariff category, on an average, are 20% more efficient than the highest category. This also has a bearing on the emissions associated with the thermal power sector and could help address India’s commitment to climate change mitigation.

The proposed shift to an optimal mix assumes that there are no constraints in transmission of electricity across regional boundaries and that all plants would be available for 85% of the time. An upgrade of the transmission network, that is already under way, and a sound maintenance schedule based on predictive analytics and good asset management practices can create an enabling environment for shifting the mix.

Internalizing the costs of a transition

The CEEW analysis assumes that the decisions are made in national interest, setting aside regional constraints. In practice, discoms, which are an extension of the state government, have vested interests in maintaining high utilization of assets within their geographic boundary. In India’s cooperative federalism model, room must be created for the Centre and states to come together on these important matters, especially given the windfall gains to be had. Even if the optimization was done at a regional level, the western and northern region alone could bring down their procurement costs by Rs19,000 crore.

Technical and political challenges aside, the sanctity of contracts is important, and it is necessary to ensure that no legitimate stakeholder is put under financial duress. In any process of change, there are bound to be losers and winners. Compensating the losers, and sharing the benefits of the gains made through efficiency improvements is paramount to driving change and garnering widespread support.

In this case, the primary barrier to reform will be from those plants whose services are not required or are diminished. Fixed costs and fixed operations and maintenance payments to these plants must continue and early retirement of inefficient plants must be financially engineered. The savings of Rs29,300 crore is a conservative estimate, as the CEEW analysis only accounts for 65% of all coal-based generation. It would be more than sufficient to pay the fixed charges for plants that are not requisitioned and could still leave a benefit of Rs18,000 crore a year. This approach could easily be extended to a generation mix that includes RE.

A comprehensive evaluation of procurement efficiencies, externalities and sharing of benefits with those who lose out, is key to India’s energy transition.

Karthik Ganesan and Kapardhi Bharadwaj are, respectively, research fellow and programme associate at the Council on Energy, Environment and Water (CEEW).