The confusion over Internet protocol-based television (IPTV) services is a clear instance of converging technologies being restricted by a diverging set of laws spread over the multiple jurisdictions—of telecom, IT, cable and broadcasting. This limits competition in the communications industry and reduces consumers’ benefits. 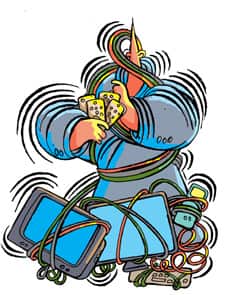 Meanwhile, telecom regulator Trai has taken a position last week, reversing its earlier view on telecom companies’ ineligibility to provide IPTV. Here, it is worth noting that Trai had earlier suggested barring the stand-alone ISPs from IPTV altogether. And the department of telecommunications, which subsequently decided the norms, set the bar for IPTV so high that it seems to favour the largest ISPs—telecom companies themselves. But the outcome is only restriction of competition; globally, ISPs can offer all services irrespective of their size and coverage, and the market there has only benefited.

Trai’s latest paper, now, takes a stand on the turf war between cable and multi-system operators and telecom companies. The former set (of incumbents in the television content distribution business) is worried about a level playing field. Trai has made a detailed case for telecom companies being eligible for IPTV, through a lengthy comparison of the technical aspects of their service with cable TV. The point here is why should it have to adopt a convoluted route to show telecom companies can enter without any changes in law? The market should be open to anyone capable of providing the service.

A major problem here is that converging technologies are quite out of the reach of the understanding of the policymakers. This leads to micro-involvement in aspects of business that should be best left to the market. Hence, there is the gamut of clauses defining the regulatory coverage of a technology—seen earlier in the debate on cellular services such as CDMA, GSM among others, and now in the differentiation between television services through cable and Internet based on equipment or network deployed.

But with technologies fast evolving, IPTV is also expected through mobile networks soon. This only reinforces how regulators must be capable of adapting to new market opportunities—a bit tough in the country, given how it is prone to appointing bureaucrats with little domain expertise. The answer lies in de-regulating as much as possible and letting the market play out. Value-added IPTV is seen as an integral part of growth for telecom players. And broadcasters will only benefit from another, better route to distributing content. ISPs, too, will consolidate on their own as competition grows. Pricing in new delivery routes would only adjust downwards, even if the initial levels are high. The cable TV sector should also be able to adapt to the evolving market. The consumer, after all, must have the choice that technology allows.

All we need is very broad regulation of content, uniform investment norms, and tight enforcement of simple rules to ensure there’s no abuse of market power. Plus, in the absence of the ideal—a convergence law, sector regulators working closely with the Competition Commission.

Should rigid laws restrict the IPTV market? Write to us at views@livemint.com