The debt-to-GDP ratio need not necessarily worsen, especially if the government can keep the fiscal deficit in check

New Delhi: As the Union budget draws near, the one number eagerly awaited by bond traders and economists alike is the fiscal deficit. However, in times of falling nominal growth, the debt-to-gross domestic product (GDP) ratio also assumes importance.

Currently, India’s debt-to-GDP ratio is around 67%, including both central and state government debt, with the former alone accounting for around 50 percentage points of this debt. That is the highest among major emerging market economies, except Brazil.

However, with inflation having fallen in the last two years leading to a slowdown in nominal GDP, there are concerns that this ratio will climb.

Just to recap, a relatively high inflation rate and high nominal GDP growth in much of the last 13 years helped in bringing down the ratio of the central government’s debt-to-GDP from 67% in fiscal 2003 to around 50% currently.

According to a 16 February report by Citi economists Samiran Chakraborty and Anurag Jha, much of this decline is owing to high nominal economic growth rather than primary budget surpluses. Primary surplus means a situation wherein government expenditure, excluding interest payments, is lower than its receipts. Note also that the sharp fall in India’s debt-to-GDP ratio in the noughties coincided with a period of nominal GDP growth being consistently higher than the average interest cost for the government. What does the current slowdown in nominal GDP entail? 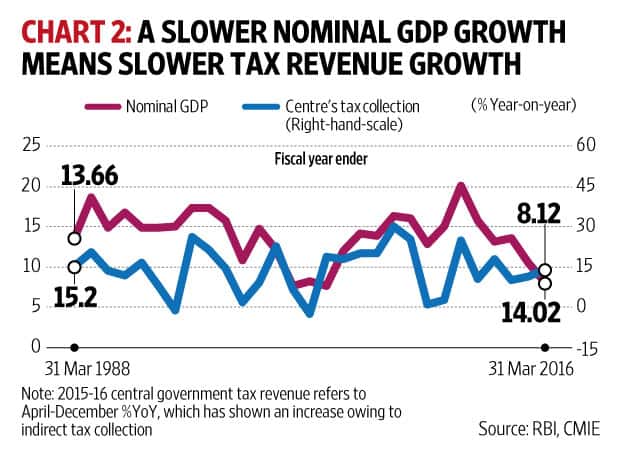 That said, the debt-to-GDP ratio need not necessarily worsen, especially if the government can keep the fiscal deficit in check.

A 5 February report by Deutsche Bank chief economist Taimur Baig and Kaushik Das suggests that the government should be able to reduce the fiscal deficit from the expected 3.9% of the GDP in fiscal 2016 to 3.8% in fiscal 2017 on the back of an expected rise in indirect tax collection, “helped by higher excise tax proceeds from petroleum products and a possible increase in the services tax rate".

On the expenditure side, Deutsche Bank expects a decline in subsidy expenditure from a likely 1.7% of the GDP in fiscal 2016 to 1.5% in fiscal 2017. Given such a scenario of continued fiscal consolidation, there is a good chance that India’s debt-to-GDP ratio can actually decline gradually over the coming years.