Take a look at the accompanying chart. It compares the huge rise in the Sensex since the beginning of March with the rally in the second half of 2007. The first thing you notice is how extraordinary the recent run-up has been, with the Sensex rising much higher in a shorter span of time. A casual glance would suggest the market in the last few months has been like the 2007 market on steroids.

Let’s look at asset prices today and see when these levels were last reached. The Sensex, for instance, was around its current level last September. The MSCI World Index closed at 996 on 12 June, 16% below its level on 30 September. And if we are to compare current prices with those prevailing in 2007, the MSCI World Index is still 38% below its level on 30 November 2007. Simply put, while we have had a fantastic rally, global equity markets are still lower than where they were at the end of September, just after the collapse of Lehman Brothers.

But here’s the similarity: Between 1 August and 30 November 2007, the MSCI World Index rose 3.5%, the Bric index 29% and the EM index 15%. In 2009, between 2 March and 12 June, the world index was up 40%, the EM index 66% and the Bric index 78%. The EM and Bric markets did much better than the rest of the world in both instances. The difference is that in 2007, the Bric rally was a continuation of the 2004-07 bull run, in which Bric markets outperformed developed markets. But the 2009 rally was a recovery after Bric markets fell far more than developed markets.

In both 2007 and 2009, the rally was based on a combination of liquidity and the premise that emerging markets would grow faster than the developed world. In 2007, when the subprime crisis hit, capital fled the developed world in search of greener pastures in emerging markets. The assumption was never that China and India would decouple from the West. Rather, the argument was that these economies would perform relatively better. Unfortunately, that line of reasoning came up against two opposing forces—one, absurdly high valuations in emerging markets, and two, the drying up of liquidity in Western banks. 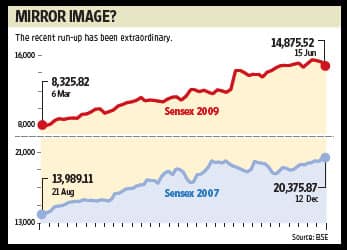 With the Sensex rising much higher in a shorter span of time, the chart suggests that in the last few months the market has been like the 2007 market on steroids. Ahmed Raza Khan / Mint

Equities are not the only assets that have rebounded. Crude oil prices are back to where they were in October. Commodity prices, as measured by the UBS Bloomberg Constant Maturity Commodity Index, are where they were in August. And the JPMorgan EMBI+ Index, which measures the premium that emerging market bonds have to pay over US treasurys, is around the level it saw in September.

It can be argued that financial markets have simply recovered from the shock of the Lehman Brothers collapse and asset prices are back to where they were before that implosion. The problem arises if the rise is seen as evidence of a V-shaped recovery. There are few voices arguing in favour of that, and most of them warn that markets have gone far ahead of the real economy. Also, the green shoots of recovery are dependent on governments’ care. At the same time, Morgan Stanley economists have said central banks are likely to continue to pump in liquidity and, combined with low growth in the real economy, that spells high asset prices.

So, what will be the signs that will spell an end to the rally? So far, economic data have shown rapid improvement, albeit from very low levels. Any signs of it flattening out would run counter to the V-shaped bounceback assumption and markets would then adjust for a long and slow recovery.