According to the Department of Industrial Policy and Promotion, foreign direct investment (FDI) into India reached the “highest ever" mark of $51 billion in April-February of fiscal year 2015-16. This exceeds the $47 billion peak of FDI inflow in 2011-12; as a fraction of gross domestic product, FDI inflows are now about 2.1% against 1.8% then. One hopes that such record breaks are perpetuated ahead as India needs large investments—foreign as well as domestic—to meet its vast requirements.

That said, the issue of treating FDI inflows as stable financing for the current account deficit needs serious qualification. In theory, it is indeed secure foreign financing. FDI is into plant and equipment, factories which eventually produce tradable goods that then generate foreign exchange resources to help repay past borrowings or debts.

In practice, however, there can be deviations. 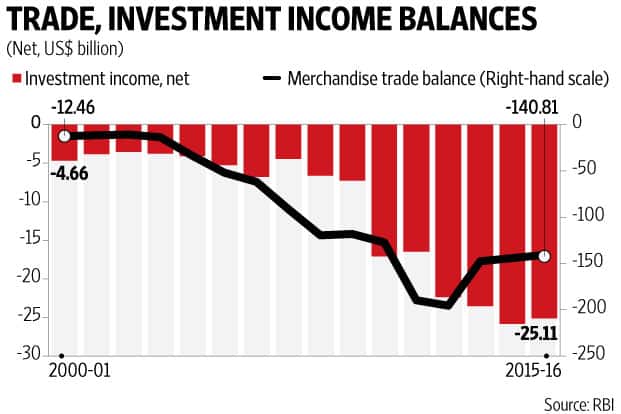 For example, FDI inflows could seek the domestic market instead of being export-oriented; concentrate in the relatively more profitable, non-tradable sector, leading to little or no transfer of technology. It may boost consumption and imports that could exceed exports, thus creating trade deficits instead of surpluses; and FDI-associated income and principal payments could rise over time. If export earnings are insufficient to counter any, or a combination of these features, the current account imbalance could actually worsen instead of improving.

What is India’s track record so far? The trend of widening merchandise trade deficit is well-known. So here, we focus on just FDI-related repatriations or outflows, i.e. net investment income, which is payment on account of royalties, technological know-how fees, etc. against the income receipts from overseas investments by residents.

We can see in the accompanying chart that net outflows on investment income and principal payments approximately doubled in eight years to 2008-09; these quadrupled in the following six years, i.e. by 2014-15.

In the last two years, the deficit on this current account component is about $25-26 billion, which is nearly the size of the overall current account deficit in 2014-15 ($28 billion).

In 2012-13, when oil prices were at higher levels, the net investment income deficit was one-fourth the overall current account deficit ($88 billion).

If past patterns are any guide, this could well morph into a future drag upon the current account. While celebrating the stability of FDI-financing as against that from erratic short-term portfolio capital, it’s important to note that the nature and structure of FDI matters for the evolution of the current account deficit. This needn’t necessarily become self-sustaining in the long run.

Renu Kohli is a New Delhi based economist.