Home >Opinion >Online-views >A master of his craft

A master of his craft

A master of his craft

The astonishing part about Soumitra Chatterjee’s long career is not that he won the Dadasaheb Phalke Award this year, but that it took four decades of exceptional performances before national juries began honouring him: a special jury prize in 2001, and a national award in 2007, (besides the Padma Bhushan in 2004). He spurned the first such award, pointing out how popular, mainstream cinema was crowding out the cinema that made you think, and he was right.

If quantity equated quality, Hindi cinema would be India’s best. For provocative cinema that stays with you beyond the three hours at a theatre, we turn to films made in other Indian languages, Bengali being the most prominent. These films bear a closer relationship with life as it is, and not as it is fantasized, although the so-called regional languages too produce escapist fare, and not all Hindi films are mediocre. 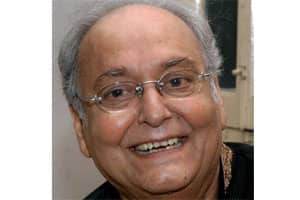 Over the years, Chatterjee personified the nuanced angst of the modern educated Indian, bound by traditions and accepting them while being sceptical. When tragedy strikes, he is overwhelmed, but he finds the reserves within him to rise again and faces the future with equanimity.

Apu is a hard act to follow, but many of Chatterjee’s roles stand out: the grim truck driver Narsingh in Abhijan (The Expedition, 1962); the boundless enthusiasm of Amal in Charulata (The Lonely Wife, 1964), who stirs creativity and much else, unleashing an emotional whirlwind in his gifted sister-in-law, played by another Ray regular, Madhabi Mukherjee; his sobering presence among friends on a picnic in Aranyer Din Ratri (Days and Nights in the Forest, 1969); the anguish of the teacher unable to feed his family during the Bengal famine in Ashani Sanket (Distant Thunder, 1973); the Charminar-smoking detective Feluda in Sonar Kella (The Fortress, 1974) and Joi Baba Felunath (The Elephant God, 1978); the self-righteous hypocrisy of a freedom fighter in Ghare-Baire (The Home and The World, 1984); all the way up to the frustrated rationalist fighting superstition in Ganashatru (Enemy of the People, 1989, based on Henrik Ibsen’s play). And there were other great films, with other directors, like Mrinal Sen and Tapan Sinha. Throughout, the angst Chatterjee embodies is real—of dealing with a complex world at odds with one’s sensibility, and often seeking place for oneself in that universe—at times with integrity, at times, making compromises.

Since his award, some accounts have compared the Ray-Chatterjee relationship with that of Federico Fellini and Marcello Mastroianni in Italian cinema, or Akira Kurosawa and Toshiro Mifune in Japanese cinema. But the Italian duo made only a handful of films, and the Mifune-Kurosawa relationship had its ups and downs, although not as dramatic as the fallout between Werner Herzog and Klaus Kinski, where Kinski flashed a gun and stormed off a movie. François Truffaut’s partnership with Jean-Pierre Léaud was warmer, where Léaud plays Antoine Doinel, Truffaut’s alter ego, but again, the French duo made four films together. Ray and Chatterjee made 14.

The question of what Chatterjee would have been like without Ray is moot. Ray was an auteur, who wrote his own screenplays, drew his shooting sketches, stood behind the camera, composed music, and hovered over the editing machine. But would he have been able to tell his stories as well without Chatterjee—or, for that matter, Bansi Chandragupta’s art direction, Dulal Datta’s editing, and Subrata Mitra’s or Soumendu Roy’s camera work? That range of talent shows that Ray had a gifted ensemble of which he was the master with the overall vision, but these remarkable people helped realize it. Ray shaped Chatterjee’s persona; Chatterjee made Ray’s imagination real. That made them inseparable.