Time for a Mumbai Plan

Time for a Mumbai Plan

Two years from now, the justly famous and much-fabled Bombay Plan will be 70 years old. During this period, the Indian economy has grown more than 20 fold; and the Bombay Plan has played no mean role in this achievement.

During the same period, the progeny of those who drafted the plan—the top eight Indian industrialists of that time—have also grown manifold in size, strength and status. Compared with their forbearers, the current crop of industrialist is incomparably richer in wealth but not seemingly so in wisdom and foresight. For had it not been so, they would not have kept quiet on what is happening right now. Their collective silence on the ongoing political and governance turmoil in India is inexplicable, to say the least. Especially as at the heart of it all is the relation between companies and the government.

Indeed, The recent Schumpeter column in The Economist, castigated the “bollygarchs" saying, “As things stand, never in human history have so few with so much said so little about the fate of so many". This is as severe an indictment as any. 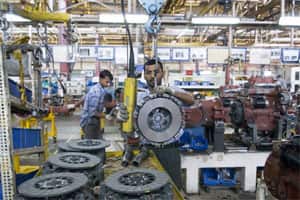 Indian economy has grown over 20 fold in the last 70 years. Photo: Madhu Kapparath/Mint

All that is now heard from big companies are individual cases, seeking to deny any wrongdoing, breach of trust or breaking of rules. The issues—it doesn’t seem to have occurred to this powerful class—go far beyond matters of individual propriety. If nothing else, the instinct of self preservation must wake them up to emerging realities.

Seemingly it is the democratization of information that has triggered this upheaval but underlying it are major changes in the political economy of India: the rise to dominance of regional capital, reflected in and complemented by, the rise to power of the regional political parties.

In the political arena, this structural shift has, to some extent, been recognized. It has resulted in a rebalancing of power: a coalition of a national party and regional parties is now becoming the norm at the sub-national level. Such an “alliance" or scheme of “power sharing" has yet to find a parallel in the world of business.

Over the last two decades or so, a new social and business class, whose value systems are vastly different, has come into existence. First generation entrepreneurs are threatening to replace the old order from outside and professionals are challenging it from within.

This is changing the dynamic of important relationships such as those between companies and government. The emerging structure of relationships underscores the need for a new set of rules of engagement.

The move from the licence control raj to regulatory control was a part of this redefinition. But that seems to have gone awry and is suddenly falling apart and threatening to become anarchic.

In this situation, Indian companies must reclaim and renew their thought leadership that they frittered away in 1990s, courtesy the myopia of the Bombay Club. It can be affirmed by a strategy that, even as it is self preserving, contributes to new national economic order. Exactly as was done by the Bombay Plan in 1944. What is needed today is a Mumbai Plan, circa 2014.

In this plan, not only must the captains of national business contend with new challenges from abroad, they must, more importantly, come to terms with the changed nature of domestic entrepreneurial enterprise and cater to the aspirations of the ever increasing tribe of global Indians.

If patriotic sensibilities drove the Bombay Plan, then commitment to an institutionalized system of democracy in politics and business must drive the Mumbai Plan.

The stakeholdership of business, not just of corporations, has to become more widespread and diverse.

As in the case of the Bombay Plan, the value of the Mumbai Plan will not lie in its economic projects and projections but an overall perspective of the political economy of development.

In doing so, it will have to take a definite political alignment and avoid the pitfall of economic development in a vacuum of political neutrality.

It is not about a person in power, a political party in government or about political affiliations of an individual company that need attention; instead, it is about the rules of engagement consistent with the economic direction of the country that require careful thought. To some extent, the kind of corruption that is agitating India today was built into the Bombay Plan as it detailed the facilitating role of the government and the public sector in promoting private enterprise. As such, this must be reformulated. In other words, the Mumbai Plan, even as it will have to be self preserving and self serving, must align itself to present needs of nation building. Just like the Bombay Plan of 1944.