In a paper released in 'Lancet', a team of researchers identified seven structural problems in India's healthcare system

Mumbai: Despite recording several gains in health in recent years, India continues to lag several health indicators such as mortality rates and malnutrition. The country carries a disproportionate burden of the world’s sick. Home to 17.5% of earth’s population, India accounts for 20% of the global burden of disease, 27% of all neonatal deaths and 21% of all child deaths (younger than five years). In a paper released over the weekend in health journal Lancet, a team of researchers led by Vikram Patel, a professor at London School of Hygiene and Tropical Medicine, identified seven structural problems in India’s healthcare system.

Here are seven charts that sum up these key challenges.

India has made strides in the expansion of public services. For instance, in 2015, there was one government hospital bed for every 1,833 people compared with 2,336 persons a decade earlier. However, as Lancet points out, this has been inequitably distributed. For instance, there is one government hospital bed for every 614 people in Goa compared with one every 8,789 people in Bihar. The care provided in these facilities is also not up to the mark. For example, in 2011, six out of every 10 hospitals in the less developed states did not provide intensive care and a quarter of them struggle with issues like sanitation and drainage. There aren’t enough skilled healthcare professionals in India despite recent increases in MBBS programmes and nursing courses. Lancet says this shortage is compounded by inequitable distribution of these resources. In community health centres in rural areas of many states, ranging from Gujarat to West Bengal, the shortfall of specialists exceeds 80%. “India does not have an overarching national policy for human resources for health. The dominance of medical lobbies such as the Medical Council of India has hindered adequate task sharing and, consequently, development of nurses and other health cadres, even in a state like Kerala that has historically encouraged nurse education and has been providing trained nurses to other parts of India and other countries," said the Lancet study. 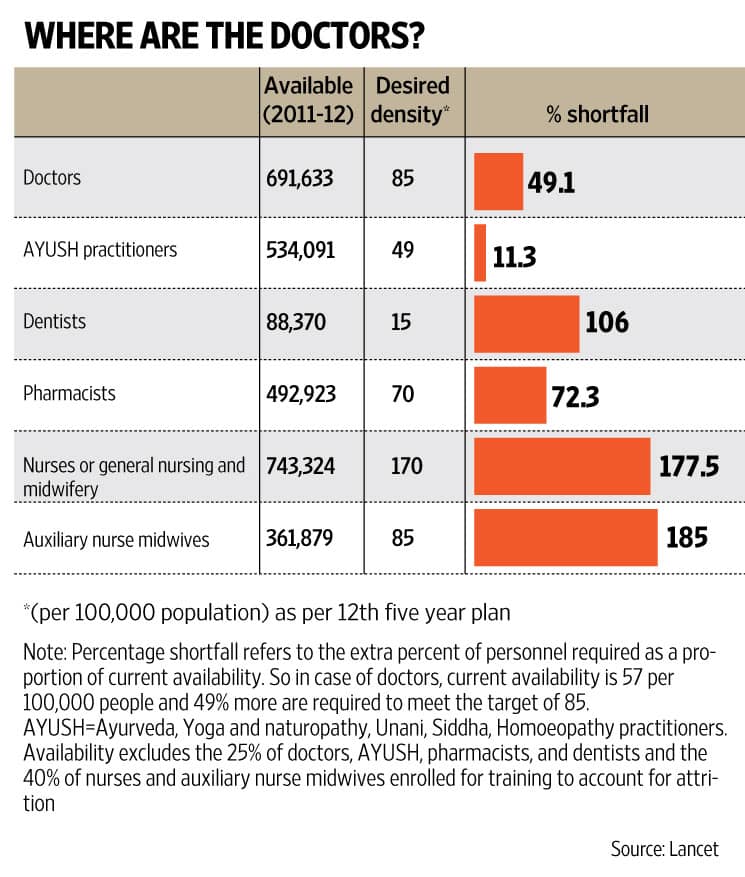 Given the quality of care available, few frequent public sector hospitals. The National Sample Survey Office (NSSO) numbers show a decrease in the use of public hospitals over the past two decades—only 32% of urban Indians use them now, compared with 43% in 1995-96. However, a significant portion of these private practitioners may not be qualified or are under-qualified, Lancet said. For instance, a study in rural Madhya Pradesh found that only 11% of the sampled healthcare providers had a medical degree, and only 53% had completed high school. Moreover, “the many new institutions set up in the past decade... encouraged by commercial incentives, have often fuelled corrupt practices and failed to offer quality education", the study said. 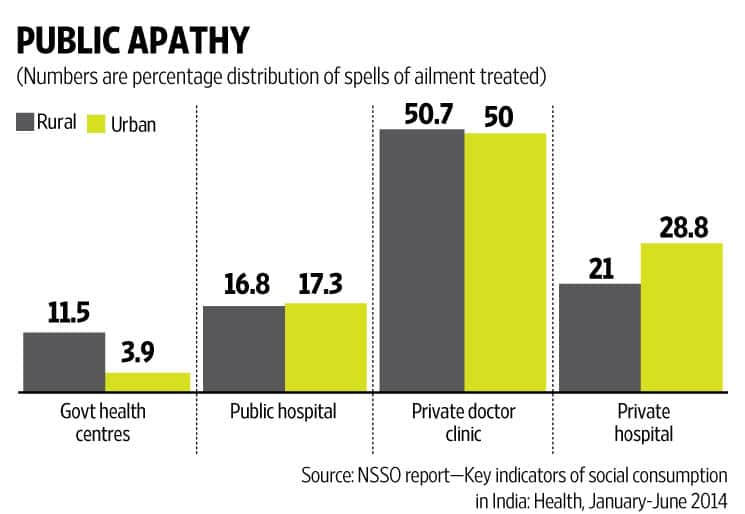 Public health expenditure remains very low in India. Even though real state expenditure on health has increased by 7% annually in recent years, central government expenditure has plateaued. Economically weaker states are particularly susceptible to low public health investments. Many state governments also fail to use allocated funds, but this “might simply reflect structural weaknesses in the system and that need to be addressed with more resources and a different approach to provision and delivery of care", said Lancet. The 14th finance commission recommendations, which will transfer a greater share of central taxes to states, offers an opportunity for the latter to increase investments in health. 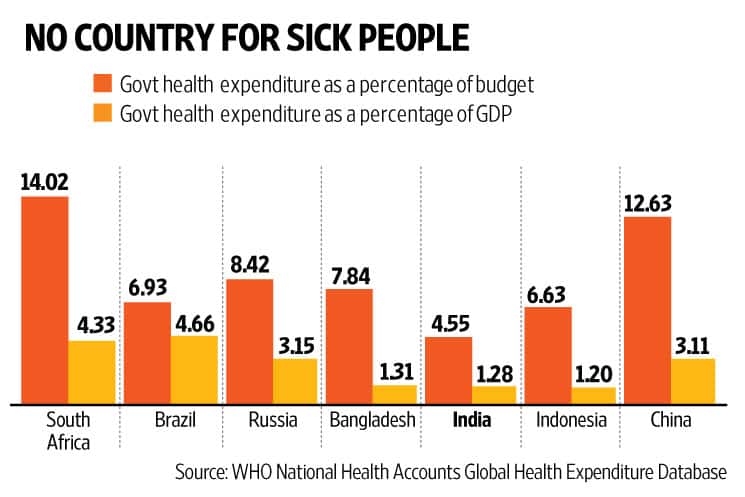 Like in most facets of life in modern India, getting quality, clean, up-to-date data is difficult in the health sector as well. This is despite the presence of many agencies ranging from NSSO to the Registrar General of India to disease-specific programme-based systems to survey malaria to HIV. Data is incomplete (in many cases it excludes the private sector) and many a time, it’s duplicated. Worse, the agencies don’t talk to each other. Further, its usage is limited because of an inadequate focus on outputs and outcomes. 6) Irrational use and spiralling cost of drugs

Costs of medical treatment have increased so much that they are one of the primary reasons driving people into poverty, as Mint has pointed out previously. Yes, there have been schemes such as the Jan Aushadhi campaign to provide 361 generic drugs at affordable prices and different price regulation policies, but their implementation has been patchy and varied in different states, said Lancet. Corruption also increases irrational use of drugs and technology. For instance, kickbacks from referrals to other doctors or from pharmaceutical and device companies lead to unnecessary procedures such as CT scans, stent insertions and caesarean sections, the study said. “In the past 5 years, the government has introduced several new laws to strengthen governance of the health system, but many of these laws have not been widely implemented," said Lancet. In some instances, the “scope of (some) regulations is still unclear, and there are fears that these laws have hindered public health trials led by non-commercial entities", it added.

The Lancet study identified inadequate public investment in health, the missing trust and engagement between various healthcare sectors and poor coordination between state and central governments as the main constraints why universal healthcare is not assured in India.

“At the heart of these constraints is the apparent unwillingness on the part of the state to prioritize health as a fundamental public good, central to India’s developmental aspirations, on par with education. Put simply, there is no clear ownership of the idea of universal health coverage within the government," it said. 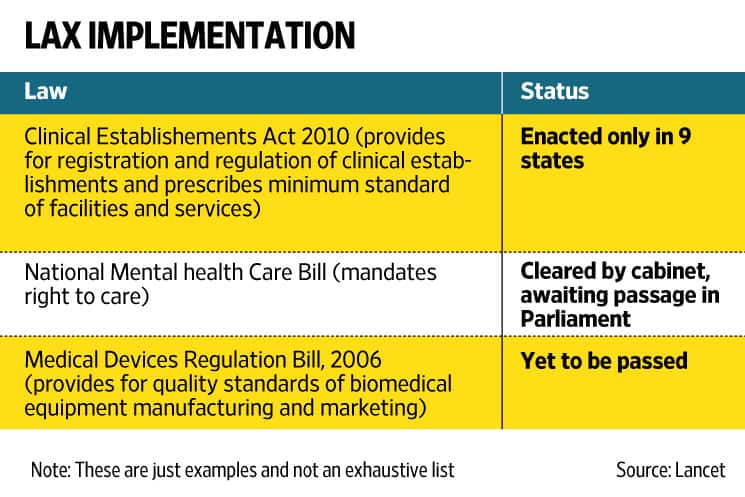