Home / Opinion / What denominations of bank notes do we need?
Back
Share Via

What denominations of bank notes do we need?

With the new Rs500 note not yet in wide circulation, people have found it difficult to get change for Rs2,000

There is a popular high school arithmetic problem of a shopkeeper’s son who drops a 40kg weight, only to find that he can use the resulting pieces to measure every integer weight between 1kg and 40kg. The problem is to determine what weights the 40kg weight broke into so that this kind of measurement is enabled.

The answer is to split it into powers of three—every integer weight between 1 and 40 can be measured using weights of 1,3,9 and 27 (allowing for “negatives"). This problem is relevant in the context of some research papers that came out in the 1990s which argued that optimal denominations of currencies should proceed in powers of three, if the ease of providing exact change needs to be maximized. Of course, no central bank has actually implemented these recommendations, given that powers of three are not compatible with the decimal system, and can make calculations tedious. Instead, many countries have compromised to use the 1-2-5 formula, using notes and coins proceed in multiples of 2 and 5. India is no exception to this rule, having currency worth 1,2,5,10,20,50 and 100, and till recently, 500 and 1,000. Following the withdrawal of Rs500 and Rs1,000 currency notes two months back, the Reserve Bank of India (RBI) introduced a new note worth Rs2,000. With the new Rs500 note not yet in wide circulation, people have found it difficult to get change for Rs2,000. There are theories that the reason ATM lines came down towards the end of November was that they were exclusively giving out Rs2,000 notes, which seemingly nobody wanted.

While we wait for the Rs500 notes to become available widely and possibly ease our change problem, this is a good opportunity to analyse in what proportions notes of different amounts need to be available. In order to do this, we need to analyse how each amount can be paid using the minimum number of notes/coins possible.

The problem of determining the least number of notes/coins to pay a certain amount is a well studied problem in computer science, and there is a popular algorithm using dynamic programming to solve it. The problem, however, is that the common definition of the problem doesn’t take into account that the payee can give some cash back (change), and the classic dynamic programming solution doesn’t apply to this case (with cash back). It is not a hard problem to solve using graph theory, though, and I’ve uploaded code for solving it here . 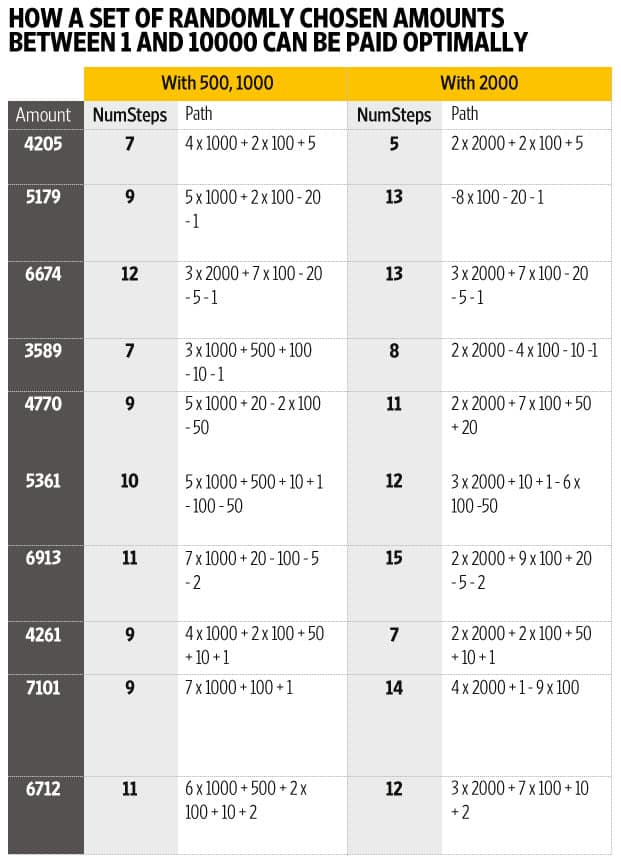 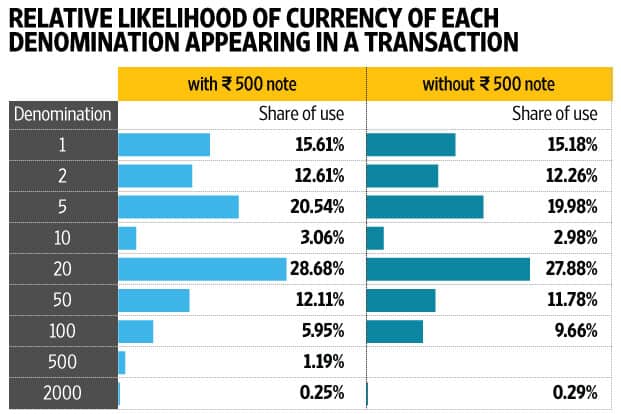 Tables 1 and 2 show how a set of randomly chosen amounts between 1 and 10,000 can be paid optimally in the old (Rs500 and Rs1,000 notes) and new (Rs2,000 notes) regimes. As we can see, there are a few amounts for which the old regime was more efficient, and some for which the new regime is more efficient. In fact, as Figure 1 shows, the new regime (with the Rs2,000 note) is less efficient than the old regime for most small amounts. In other words, public anger with the new set of denominations is justified.

The question is if the new Rs500 note can ease the anger in terms of making the transactions more efficient. Figure 2 suggests it will, as the note can make transactions efficient even compared with the time before demonetisation.

When the new Rs500 note is available in wide circulation, there will only be a small range of values (between 773 and 1,272) where the old regime (with Rs500 and Rs1,000 notes) was more efficient. Subject to availability of notes, we are likely to use fewer notes per transaction once the new Rs500 notes are in play compared with even the time before demonetisation.

Read here: What are banks doing with cash deposit flood?

So how many of the new Rs500 notes will we need, vis-a-vis the number of Rs100 and Rs2,000 notes? In order to answer this, we will need to make an assumption of the total value of a transaction.

Let us assume that the average cash transaction in India is of Rs100, and that cash transactions follow the Pareto (or so-called 80-20) distribution (where 20% of transactions account for 80% of the money transacted). Let us also assume that cash is used only for transactions of value less than Rs10,000 (beyond that, we can assume only Rs2,000 notes will get used, so the number of Rs500 notes doesn’t matter).

Then, there are multiple ways to pay certain amounts. To take a simple example, Rs3 can be paid using 2 coins in two ways —either using a 1 rupee coin and a 2 rupee coin, or by giving a 5 rupee coin and getting a 2 rupee coin as change. We will arbitrarily pick one method of payment in these cases.

Then again, given that currency is used as a store of value, and that different notes have different “velocities" (frequency at which they’re used), this doesn’t say much about the ratio of different notes we need to have.

At the end of the last financial year, well before demonetization happened, the numbers of Rs100 and Rs500 notes in circulation were approximately equal. Given that a transaction is 5 times more likely to feature a Rs100 note (than a Rs500 note), this either implies that a lot of Rs500 notes were used more as stores of value, or that this distribution had resulted in a kind of small change problem.