Ourview | A big win for Myanmar

Ourview | A big win for Myanmar

If initial indications are anything to go by, Myanmar has taken the first step on the road to democracy. On Sunday, the National League for Democracy, the leading opposition party, claimed its chief, Aung San Suu Kyi, had won from the constituency where she was contesting. 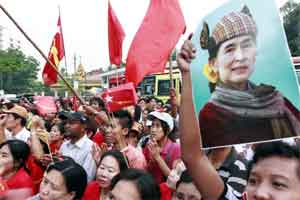 Aung San Suu Kyi’s National League for Democracy supporters cheer after the party’s announced that she has won a parliamentary seat in a landmark election, setting the stage for her to take public office for the first time. Photo: AP

These are heady days in Myanmar. The elections were witnessed by observers from the European Union and other countries. Equally, the Myanmar government allowed unprecedented access to foreign journalists during the process. For a country that had erected a “bamboo curtain" for the better part of its history after the British left it in 1948, this marks a sharp break with the past. Just four years ago, when cyclone Nargis hit the country —leading to more than 130,000 fatalities—the government did not allow access to aid distribution groups. Access to journalists was out of the question. Yet, within the last one year, Myanmar has witnessed dramatic changes: political prisoners have been released, trade unions are being allowed to function legally and there are efforts to resolve festering ethnic conflicts.

Resolving the country’s accumulated political problems require a transition to effective democracy. There are signs this is happening. The question in almost all transitions from military to civilian rule is that of the fate of erstwhile rulers; lack of trust between military incumbents and the incoming democrats often derails such transitions. So far there are no signs of such problems in Myanmar. Suu Kyi—for all her travails in the past 20 years—is remarkably free of bitterness. Equally, the country’s president, Thein Sein, has stuck to the path of political liberalization. The combination is propitious for the country’s political future.

Is autocracy coming to an end in Myanmar? Tell us at views@livemint.com