Home >Opinion >Online-views >The perils of jazzing up Carnatic music

The perils of jazzing up Carnatic music

The perils of jazzing up Carnatic music

I am having people over for dinner and, as usual, I am obsessing about the music. There are those who think that good food and wine make a party. True, but I also submit that the music is as important as the martinis. Jazz can be a good choice for parties—it sounds terrific and doesn’t overwhelm the conversation. This time, however, I want to play Indian music. Pure Carnatic and Hindustani music, much as I love them, will not do. The crowd is too diverse to appreciate it. Or so I think. 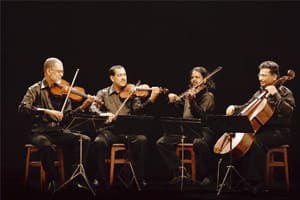 In desperation, I turn to Carnatic jazz. I follow this genre off and on and it usually gets me mad. Most fusion is annoying to purists. It is like a star chef “messing" with a beloved rasam or ma ki dal recipe. However talented he may be, there is no way these traditional recipes can be improved. They are too ingrained in our palate for us to tolerate any deviation.

The same thing applies to me with respect to Carnatic music. Susheela Raman is a much feted global singer. She is smart, sexy and talented. But I hate her music mostly because she takes songs I love and mangles them. Maha Ganapathim, for instance, is a Dikshitar composition in the majestic Raga Nattai. An ode to the Hindu god Ganesh, it is a fail-safe opening number for an amateur musician. Raman sings it like a breathy Joan Baez tune. After half a minute, I tune out. The only song that I’ve come close to liking is Raman’s Nagumomu, which she sang with Rai singer Cheb Mami at a show in France. Nagumomu is a Thyagaraja kriti (song) in the pleasing Raga Abheri (which, as it happens, is the favourite raga of J. Jayalalithaa, former chief minister of Tamil Nadu. Or so she told me during an interview). Somewhat akin to the Hindustani Bhimplas, Abheri attains its full flowering in Nagumomu. Raman mixes this song with Algerian Rai music and the combination, I’ve got to say, isn’t as grating as her other work.

Jazz and Carnatic ought to have little in common. Jazz emerged out of protest and Carnatic, out of spirituality and religion. Jazz history is full of rebellion while Carnatic is bound to tradition. Yet in their structure, the two streams of music have a lot in common, particularly their enthusiasm for free-form expression.

A number of Carnatic and Hindustani luminaries, including Hariprasad Chaurasia, Ravi Shankar and L. Subramaniam, have collaborated with jazz artists. John McLaughlin took the opposite route with Shakti, his 1970s collaboration with violinist L. Shankar, in which he played Carnatic music for an Indian audience. Among today’s Carnatic exponents, saxophonist Kadri Gopalnath is perhaps the musician who has travelled the farthest with respect to working with other genres of music. He inspired and collaborated with American jazz musician Rudresh Mahanthappa in the album Kinsmen. In an interview, Mahanthappa calls their collaboration “Indian-American hybrid music" and the term is apt. The songs in Kinsmen are mostly pleasant but occasionally disconcerting. The song, Snake, for instance, is a riff on the Raga Punnagavarali, which is basically snake-charmer music. The Carnatic music element in this song is so strong that the jazz interludes sound forced—more of a distraction than an addition. In contrast, Convergence blends the jazz and Carnatic elements better. Sadly, the talented violinist Kanyakumari gets submerged between the jazz and Carnatic saxophones.

Kerala’s Balabhaskar plays a mean jazz violin. I love his performances, not only because he is cute to look at, but also because he seamlessly goes from the Tamil hit Snegithane to Love Story to Tere bina zindagi se koi. Those who think this is trivial should try it themselves.

Montreal-based guitar-player Joy Anandasivam successfully marries Carnatic and jazz to create a fusion sound that takes the two originals to a new level. His music has the comfort of Carnatic ragas and the vibrance of jazz riffs. His latest album, Told you so, reminds me of a young Mandolin Srinivas—that grinning, preternaturally talented boy who awed Chennai audiences in the 1980s with his nonchalant virtuosity.

My current favourite is a group called the Madras String Quartet. It marries Western classical with Carnatic classical. Founded by V.S. Narasimhan, the group recently released an album called Raga Saga, in which pure Carnatic songs are set against a harmonic background of cellos and bases. Quite lovely to listen to.

One thing that I discovered while researching this column is that most musicians seem to display their work and profiles in MySpace, not Facebook. I wonder why—whether it is a self-perpetrating phenomenon or whether MySpace is where the creative types converge as opposed to Facebook. Stands to reason.

Shoba Narayan is considering leaving Facebook for MySpace so that she can hobnob with cool musicians. Write to her at thegoodlife@livemint.com