The swami with a reputation

The swami with a reputation

I meant to write about Mahesh Yogi the week he died. But then, all the obituaries appeared, each of them saying the same thing and quoting from The Beatles’ Sexy Sadie (“Sexy Sadie, what have you done, you have made a fool of everyone") to make the point that the giggling guru was a humbug who struck it rich because he had the good sense to appear on the scene when The Beatles were taking LSD. 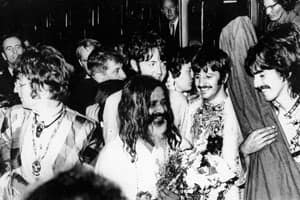 Guru cool: The Maharishi had a following of six million people, including The Beatles.

To understand the Maharishi’s rise, you need to place him in a historical context. He sprang to fame in the mid-1960s when hippies had begun to make a connection between Indian culture and hard drugs. Such books as Herman Hesse’s Siddharth became part of the drug scene. Men we had never heard of in India such as Baba Ramdass (his real name was Richard Alpert) were regarded as experts on Hindu philosophy. A guru who has hardly been heard of since (he was called Swami Satchidananda) addressed the tripping masses at Woodstock. The Rolling Stones put a sitar part on Paint It Black.

The only two Indians who emerged from this phase with any credit were Ravi Shankar and the Maharishi. Shankar, because he popularized Indian classical music without ever compromising on its essence. In the 1960s, he was the most famous Indian in the US and though his domestic critics wrote him off as a groupie-crazy, drug-addled hippie (he never took drugs and I think he’s quite proud of the groupies), he never let criticism or fame or fortune divert him from the music. Likewise, the Maharishi resisted the temptation to become the druggie guru. While all the others turned a benign eye to marijuana or even heroin, the Maharishi maintained a no-tolerance policy on drugs. And though his contemporaries fed their credulous followers a steady diet of mumbo- jumbo dressed up as Hindu mysticism, Mahesh Yogi stuck to what he was good at: Transcendental Meditation, which is an objectively mappable phenomenon, and some hatha yoga (his followers jumped up while cross-legged and thought this was levitation).

The Beatles may have made him famous in the West. But I think that they did him more harm than good in the long run. For many years, we only had the Fab Four’s version of what really happened in the Maharishi’s Indian ashram. Though The Beatles told the worst possible stories, Mahesh Yogi held his peace.

One version, leaked to the media, had the Maharishi groping Mia Farrow. Another had him fondling Jennifer Boyd (sister of Patti, then George Harrison’s wife but more famous as the inspiration for her boyfriend Donovan’s song Jennifer Juniper). And John Lennon’s own account made the Yogi out to be an idiot. According to John, The Beatles wandered in one morning and told Mahesh Yogi they were leaving. The Maharishi asked why. “If you are so fucking cosmic, you should know," John replied.

The Maharishi’s reputation within the rock community—and the tabloid press—never quite recovered.

With the benefit of hindsight we can now say that The Beatles were unfair to the guru. He never really groped anybody. That funny conversation with John never actually happened. A couple of years ago, I interviewed Deepak Chopra, who used to be the Maharishi’s right-hand man till he set up on his own and found fame on a scale which far outstripped Mahesh Yogi’s. Deepak became friends with George Harrison and said that George asked if he could arrange for him to meet the Maharishi again. As Deepak and the Maharishi were no longer on good terms, this was not easy to arrange, but he set up the meeting anyway.

According to Deepak, when George met Mahesh Yogi he began by saying “I am sorry". The Maharishi was suitably cosmic and pretended that it didn’t matter but the story slowly tumbled out. The Beatles had not wandered out of the ashram on their own. They’d been thrown out for taking drugs. To make up for this humiliation, they had spread all the sexual harassment stories and the Maharishi had been too high-minded to contradict them. Once it became clear that Mahesh Yogi held no grudge against The Beatles, recalled Deepak, George Harrison was so overwhelmed that he wept uncontrollably and became a Mahesh Yogi follower all over again, even taking part in the Maharishi’s crackpot scheme for world government.

Fortunately for the Yogi, he was able to overcome The Beatles phase in his life because Transcendental Meditation was found to work and was adopted by corporate groups, stressed out followers and even the armed forces. He had no real philosophy apart from the banal so it was not necessary to chant Hare Krishna or whatever if you wanted to follow him. And, unlike many of the others, he took no money from rich followers but set up a multimillion dollar empire based on the teaching of TM.

Other gurus came and went, all following the Sixties tradition. The Rajneesh cult for instance epitomized the values of Sixties hippiedom: natural fabric kaftans, bright saffron colours, organic food, bullshit philosophy and lots and lots of sex. The Hare Krishna movement never overcame its Sixties roots. Its greatest contribution, I have always said, is that millions of Americans now believe that Hinduism has three gods: Rama, Krishna and Harry.

Only Mahesh Yogi moved beyond the Sixties. His true heir is his former protégé Deepak Chopra who had the sense to take the Maharishi’s teachings about the mind-body connection and place them in a secular context, independent of any religious identity. If you look at TM in isolation, Mahesh Yogi did that too. But his own image, of a bearded guru in a white robe, prevented him from divorcing his philosophy and techniques from Hindu mysticism.

So, I’m quite willing to join in when people make fun of the Maharishi’s giggling or his “levitation" or his secret mantra which turned out to be “Coca-Cola". But I will never make the mistake of underestimating his achievements or his influence. At a time when the world still saw us as a land of snake charmers, mystic mumbo-jumbo and cheap marijuana, he had the vision and the wherewithal to go to the West and to conquer it on his own terms.