Why is poverty declining so slowly in India

We celebrate growth mainly because we believe that it can have an impact on poverty. However, despite two decades of fast growth of per capita gross domestic product (GDP) in India, poverty has declined quite slowly. In this column, we propose to explore why this might be so.

Figure 1 below shows growth over the last 20 years has moved the entire distribution to the right. In other words, all income groups have experienced some increase in their consumption. In fact, the population below the poverty line has come down from around 45% to 30%. This seems to suggest that we have made reasonable progress on the poverty front. However, in the context of the fast per capita GDP growth that India has had, its poverty performance leaves a great deal to be desired. 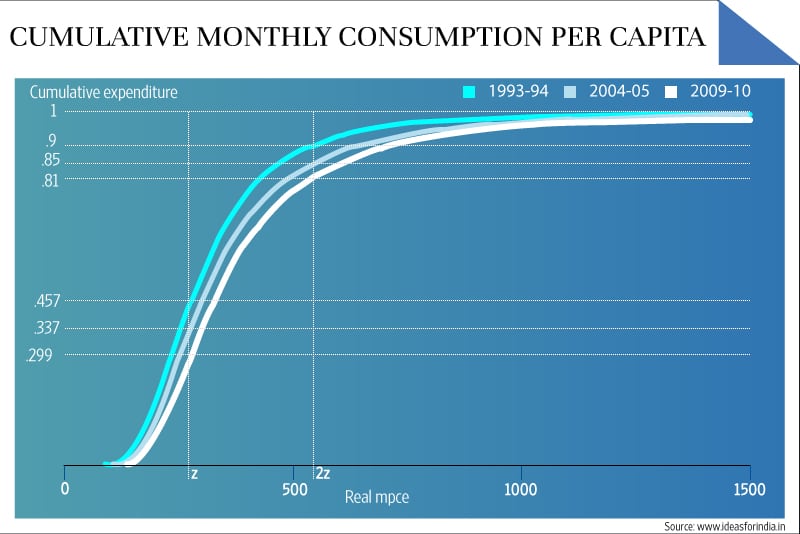 Structure of the Indian economy

Though it is the organized or formal sector that is always in the news, most of India and certainly most of its poor, make their living in the unorganized or informal sector.

To get out of poverty, they need to either increase productivity of their existing activities or to acquire skills enough to gain better paying jobs in the formal sector. Even when they do not acquire skills, workers leaving agriculture and finding employment elsewhere raises the wages of those left behind as now the latter have more land to work on. Thus, when the unskilled workers find unskilled non-farm jobs even at the same wage as before, they still make others better off. Job creation in the non-farm sectors whether for skilled or unskilled jobs is crucial for poverty reduction.

Growth drivers in the Indian economy

Which specific sectors within the formal sector are driving GDP growth and how much employment are they providing for the unskilled workers that constitute the poor?

To a large extent, what triggered India’s growth episode in the 90’s was the happenstance of the availability of a large excess supply of graduates from engineering and management schools to fill the large excess demand in the international markets for software engineers and managers. India’s growth spurt was spearheaded by very small sectors such as business services that employed a very small part of Indian labour force and that too, mostly the highly skilled. The fastest growing sectors in India were skill intensive sectors that created very little employment in general, especially for the unskilled and the poor.

During the period 1993–2004, the fastest growing sectors were mostly high-end services such as business services, communications, research, hotels and restaurants, banking, insurance etc. The growth in most of these sectors was not accompanied by much increase in the employment of unskilled workers. There were only three non-farm sectors that did increase the employment of the unskilled—trade, transportation and construction—all low-end services. During this period, the labour force working in agriculture declined by 7% and almost all of that labour was absorbed in these three sectors. The labour drawn out of agriculture was still not substantial; in fact, the labour to land ratio increased in all but four states during this period. Real wages increased but this would not have happened had there been no agricultural productivity increase.

The pattern of growth changed slightly during 2004-2009. A few manufacturing sectors such as electric machinery, metal products, wood, furniture and transport equipment joined the list of fast growing, high-end service sectors. The fact remained however that the growth in none of these sectors provided much employment for the unskilled workers. In fact, many of these sectors shed unskilled labour. Almost all the additional jobs created for the unskilled during this period were in a single sector—“construction". It employed 30% of the unskilled workers in 2009-2010. Perhaps, because of the massive employment created in “construction", the labour to land ratio decreased in most states helping to raise the real wages in agriculture. This partially explains why the growth elasticity of poverty has improved over this period.

Demand composition as a determinant of which sectors grow fast

Why did the sectors that employed unskilled labour not grow fast? While the high-end services are export-oriented and grew fast in response to the rising international demand, the informal sectors that employ unskilled workers are typically non-traded services plus agriculture. The growth in these activities typically depends on the growth in derived demand for them. When a software engineer working for Infosys sees an increase in her income, how would she spend this additional income? She already has a driver, a maid and a cook. She is not going to hire more domestic help. She might buy an iPad, visit more holiday resorts and buy higher quality processed and unprocessed food items. The component of value added by the unskilled in producing these items is quite limited.

Figure 2 below (shows how people at different levels of income spend their money and how this pattern has varied during 1993-2009. Group 1 and Group 2 are “food grains and pulses" and “other unprocessed food items" respectively. Group 3 and 4 represent the informal sector (other than agriculture) and formal sector products respectively. Notice that richer people spend more on the formal sector products. Moreover, over time, all income groups have increased the share of their consumption of formal sector products. It is clear that as incomes grow, the demand for skilled labour grows much faster than for the unskilled labour. That is, only a small part of the income gains, especially of the rich, trickles down to what the poor can produce. The more concentrated the income gains at the top, the lower is the trickle down. There in lies a part of the explanation for our motivating question.

This implies that sectors such as dairy, fruits, vegetables, meat and poultry have a high growth potential and also hold the promise of providing employment to relatively unskilled people. It should be a matter of high priority to remove any impediments to their growth. 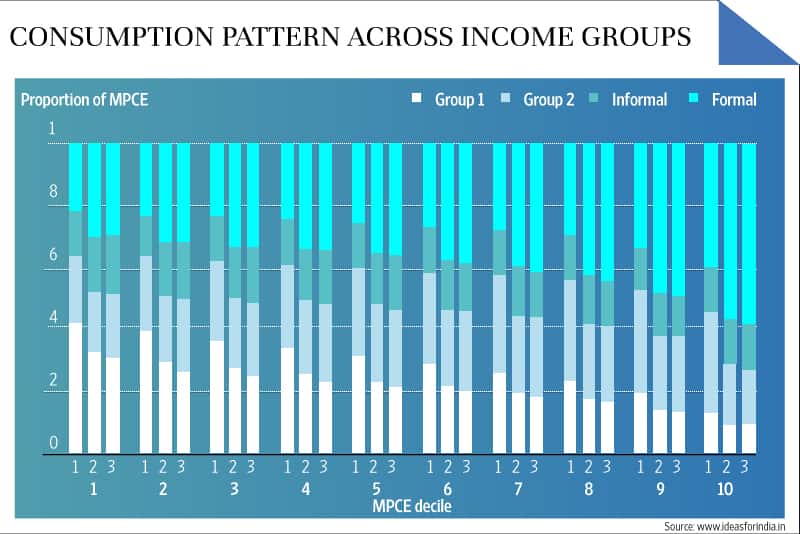 The role of education

So far we have only talked about poverty reduction in terms of the employment for the unskilled. However, a big part of the development process is the skilling of the unskilled labour force. If the educational system rapidly converted the unskilled into skilled, they would be absorbed into the fast growing formal sector and there would be rapid poverty reduction. A research paper by A. Kotwal and A. Roy Chaudhuri “Why Is Poverty Declining So Slowly in India?" shows that the educational premium for graduates has increased continuously from ₹ 322 per week in 1993 to ₹ 494 per week in 2009. This indicates that the excess demand for graduates persists and has grown. In other words, the educational system is not generating skills fast enough.

To explore the root cause of the poor quality of our graduates, we need to start at the primary education level across the country. Pratham, the foremost educational NGO in India has been actively studying the problem of the quality of education for many years now. For eight years now they have published Annual Status of Education Report (ASER).

The findings are alarming.

How can a skilled labour force be built on such a weak base?

To sum up, the slow rate of poverty decline despite fast growth can be attributed to: (1) the lack of access of the informal sector to crucial inputs that would allow it to improve its productivity, (2) the positive feedback emanating from a skill biased growth pattern so that the skilled workers (non-poor) spend their increased incomes mostly on the goods produced by skilled workers, (3) the failure of the educational system in creating a skilled labour force fast enough. The policies required to remedy (1) and (3) require institutional improvement and that in turn require concerted efforts over a long period. One avenue that will have an impact on poverty in the short run is to facilitate diversification of agriculture so that farmers could shift from food grains to horticulture, dairy and poultry for which the demand is growing across the country.

This column has been reprinted with permission from Ideas for India www.ideasforindia.in