An eye on corruption

An eye on corruption

In the last fortnight we have seen an unprecedented campaign against corruption take shape, led by Anna Hazare, a hitherto unfamiliar activist from Maharashtra who has now become a role model and a national hero for many.

As a result of Hazare’s hunger fast and the massive public support for his “India against Corruption" campaign, the government has agreed to present a Bill to check corruption before the monsoon session of Parliament ends. At Hazare’s insistence, five civil society representatives will work with five ministers to draft the Jan Lokpal Bill (or the Citizen’s Ombudsman Bill). 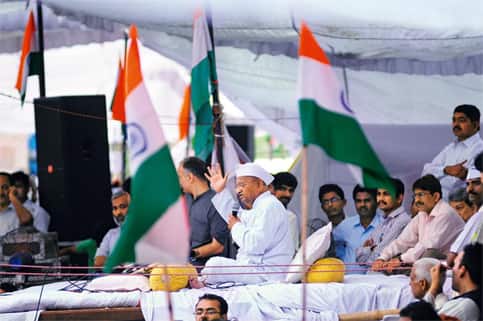 Hazare’s campaign has presented itself as both the occasion and the stage for people to vent their resentment at the government’s failure to address corruption within it. In a way, this public event has taken precedence over the details of the Jan Lokpal Bill itself. The very prospect of the Bill has now become the anchor and even the hopeful panacea for all those concerned with the malice of corruption. It is not surprising then, that people from all walks of life are participating and endorsing this movement led by a so-called Gandhian.

The news media has provided an exciting platform for expressing these emotions, and has at times amplified them, too. While Hazare’s fast lasted, the blanket coverage by TV news channels and newspapers mobilized hundreds to gather at New Delhi’s Jantar Mantar and India Gate, ostensibly in solidarity to his satyagraha movement. Most channels covered the five-day sit-in live.

In fact, media organizations not only reported the campaign, but also actively participated and supported it. The number of cameras and journalists wherever support for Hazare sprang up was overwhelming, and their consistent presence was felt throughout the campaign. Live panel discussions and interviews fed into the increasing buzz over the event.

Social media such as Facebook and Twitter, blogs and mobile messages actively backed the campaign, resulting in expressions of support across various cities such as Hyderabad, Mumbai, Bhopal, Kolkata, Bangalore, and so on. The world over, Indians used the Internet to write in. Celebrities, industry leaders and even some politicians joined the bandwagon. With the call for change gaining momentum through social media, online petitions also garnered massive response. The news media also tapped into all this, consolidating a multiplicity of voices into a coherent whole.

This frenzied tone of media support hasn’t gone unscathed, even among media professionals. Some have pointed out that the government’s voice was muted by much of the media during this debate and lacked objectivity in showcasing the larger issues. A few have also felt that with editorial inputs completely missing, the coverage was as irresponsible as that of the Mumbai terrorist attacks in 2008, especially on TV news channels that provided live minute-to-minute reportage of the campaign.

At a broader level, however, the media’s role has been accepted and even appreciated. In fact, the outcome is being celebrated as not only the victory of people and democracy, but also of the news media. The Indian media is already notable for its investigations into and reportage of corruption cases over the last few years. The coverage of the Hazare campaign seemed like an extension of these endeavours, and revived earlier efforts.

The emotional connect and collective appeal of this anti-corruption drive led by a non-political person with unquestionable integrity has somehow linked all Indians even beyond the country’s borders. Taking lessons from the recent history of such movements, three strategies for dealing with corruption come to mind.

First, effective and transparent systems for public services need to be developed, especially by accelerating reforms to bring in more accountability in governance structures through performance management systems and by plugging leakages.

Second, anti-bribery action must be strengthened and integrity promoted in business operations. More effective prevention, investigation and prosecution measures are needed to build strong deterrents into the current systems. Further, the private sectors’ participation can ensure that the fight against corruption is rooted in the building of state as well as market institutions that will work together to create healthy competition in the local economy.

Third, active public involvement, including better access to information and public participation in anti-corruption initiatives, should be facilitated. The Right to Information Act and now the Lokpal Bill are effective steps in this approach. The good news is that Hazare’s campaign seems to have brought the civil society and the media together, and also enrolled the government in the process.

Now is the time to clean up our political system. The Lokpal Bill needs to be followed up diligently, but other reforms are also required. Here again, the news media has a critical role to play.

Hopefully, it will rise to the occasion again.