Home / Opinion / The futility of asking how the market will fare

The futility of asking how the market will fare

In India, over longer time horizons, money is made or lost in individual stocks whose performance does not have much to do with what the broad market does

My practised answer to the casual social question “What do you do?" is, “I work for a bank." The answer is factually correct yet it says nothing about what I actually do. I have got varied reactions to this answer, ranging from ‘How lucky to get a government job in these times’ to ‘You look nothing like the suave investment bankers in Karan Johar movies’, and I generally just nod my head. The real reason why I don’t divulge what I actually do is because of the question that follows: “Market kya lagta hai (what does the market look like)?" This question has been my nemesis—at interviews as well as social gatherings. I really don’t think in terms of market levels and normally I don’t have a strong view on where the market is headed, but under societal pressure I regurgitate something about earnings and liquidity and macro and head straight for the buffet. 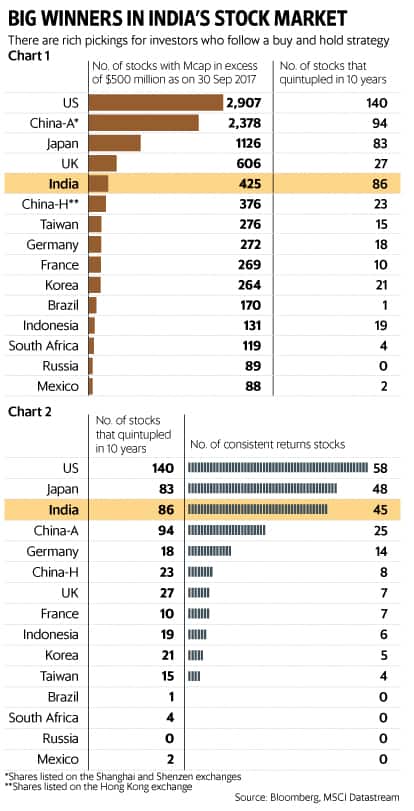 On a serious note, “Market kya lagta hai?", at least in the Indian context, is a futile preoccupation. Sample this: MSCI India barely produced any return in dollar terms for 10 years between November 2007 and November 2017. If, in November 2007, one had gazed at the crystal ball and said that the market would yield nothing for the next 10 years, the statement would have been apocalyptic, but that’s what actually happened. And not even the staunchest bear would describe the last 10 years in Indian equity markets as apocalyptic.

That’s because over longer time horizons, money is made or lost in individual stocks whose performance does not have much to do with what the broad market does. Despite the lost decade for the headline index, 86 stocks, with market capitalization in excess of $500 million, quintupled over that time frame (multiplying five times in 10 years implies a healthy compound annual growth rate, or CAGR, of over 17%) (Chart 1). We keep reiterating that our basic unit of thinking is stocks and not market averages. Like all investors, we own stocks in our portfolio and not index futures, which is why we do not obsess too much about broad market earnings and broad market valuations.

There are a few other things to notice in Chart 1. At 425, India has the second largest number of stocks among emerging markets, with a market cap in excess of $500 million, second only to the Chinese mainland market. Even developed markets like Germany and France have a lower number of such listings. This breadth of stock listings means there is a bigger pond to fish in for a bottom-up stock picker than, say, in a market like Russia or Mexico having less than 100 such stocks.

While the decadal index returns for most emerging markets, including India, have been close to zero, there was stock-picking succour in India as over 20% ( 86 stocks) of the said 425 stocks quintupled in that time frame. This is by far the best percentage for all emerging and developed markets. Thus, India not only offers a big pond to fish in but also a large number of fat fish in that pond. If we reduce the decadal hurdle rate to 12% CAGR, i.e. tripling in 10 years instead of quintupling, then over a third of the 425 stocks met that criteria in the last decade—a percentage that should whet any stock-picker’s appetite.

With any such analysis, one has to be careful of starting points, and it is useful to check whether the returns that have been generated in one time frame hold true for other time frames as well. Of the 86 stocks that quintupled in 10 years ( 17%+ CAGR) we looked for persistency as to how many of those doubled in the last three years (26% + CAGR) and tripled in the last five years (25%+ CAGR ). Of the 86 stocks, more than half, i.e. 45 stocks, met all three criteria (Chart 2). This implies that there is much better persistency in stock returns in India than in some of the other emerging markets.

For instance, the Chinese mainland market, despite having 94 stocks that have quintupled in 10 years, has just 25 stocks showing consistent returns, which implies that returns tend to get generated in short, swift bursts and if you miss those bursts, the point-to-point returns may not be as attractive. Such markets, unlike India, need more nimble-footed timing to capture those bursts, book profits and then move on to the next idea. In India, on the other hand, a buy and hold strategy works quite nicely. This might also be the reason why mean reversion strategies haven’t paid off here and some of the performing stocks have kept doing well despite high headline valuations.

This underlines the futility of obsessing over the question, “Market kya lagta hai?", provided you have a long enough time horizon for which you want to invest in India. We should consider ourselves really fortunate in that we get to invest in one of the few places in the world that is fertile ground for bottom-up work and rewards the patient stock-picker handsomely. It is infuriating when business news channels and retail brokerages egg investors on to adopt the ‘Buy Today, Sell Tomorrow’ tactic, popularly known as BTST, despite the great odds that India offers for patient investing.

A serious investor’s time is better spent analysing industry structures, understanding businesses, growth and capital characteristics and ensuring that one gets in at a reasonable price to protect against analytical mistakes. Unfortunately, this skill set can’t be developed by watching business news.

Swanand Kelkar is with Morgan Stanley Investment Management. These are his personal views.