Reserve Bank of India governor Raghuram Rajan was hauled over the coals recently for comparing India’s position as the fastest growing major economy in the world to the adage “in the country of the blind, the one-eyed man is king". Not being one to take unfair criticism lying down, Rajan rebutted the charges in inimitable style.

It’s entirely understandable that people in the government should be vexed, as they have spared no effort to highlight our rather controversial GDP growth numbers. But let’s leave aside the fact that talking of these numbers at a time when a third of the country’s population is reeling under the effects of a terrible drought may not be the most sensitive thing to do. Man does not live by GDP growth alone. As Rajan pointed out in his speech, “Our current growth certainly reflects the hard work of the government and the people of the country, but we have to repeat this performance for the next 20 years before we can give every Indian a decent livelihood. This is not to disparage what has, and is, been done."

It’s pretty well-known that India scores rather poorly on social indicators, even compared to countries far poorer than us. For example, the World Bank indicators show that in 2014, life expectancy at birth was 68 years for India, 72 for Bangladesh, 70 for Nepal and 76 for Vietnam. These three countries are all poorer than India, with lower GDP per capita. We still have to do a lot to reduce the maternal mortality rate, undernourishment and under-five mortality.

But let’s consider where India stands internationally using some economic, rather than social criteria. The countries India is compared with are Bangladesh, our neighbour, Indonesia and Vietnam, two other economies in Asia with decent growth and China, a country with whom we love to compare ourselves. All data are taken from the World Bank’s Development Indicators. The numbers bear out the need to temper the euphoria about our GDP growth. This is not to say that India does not score well by some other yardsticks, but rather to remind ourselves of the long way we have to go. The charts tell the story.

Time required to enforce a contract

Being able to enforce a contract is one of the basic requirements of business. But the data for 2015 show that it takes an average of 1,420 days to enforce a contract in India. We do better than Bangladesh, but only just—it takes 1,442 days there. It takes 471 days in Indonesia, 400 days in Vietnam and 453 days in China. We do much better than Afghanistan, where it takes 1,642 days. Hopefully, the newly minted commercial courts will help. Resolving insolvency rapidly is essential for banks to recover their loans and for the assets of a failed business to be put to more productive uses. In 2015, it took an average of 4.3 years to resolve in India, compared to four years in Bangladesh, 1.7 years in Chain, 1.9 years for Indonesia and five years for Vietnam. The process takes two years in Nepal. That is why the proposed bankruptcy law is so important. 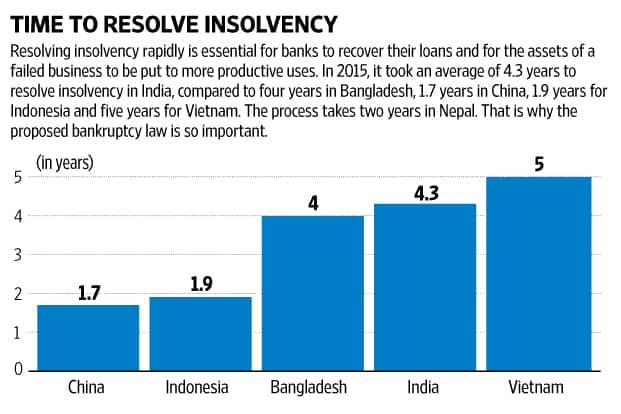 These costs include fees for documents, for customs clearance and technical checks, broker fees, terminal handling charges and inland transport. The cost does not include tariffs or trade taxes. According to the World Bank indicators, this cost in 2014 was #1,332 in India, $832 in China, $572 in Indonesia, $610 in Vietnam and $1,281 in Bangladesh. 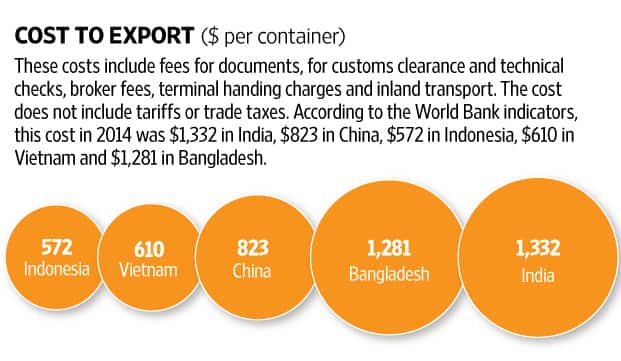 India is rightly proud of the reach of its mobile phones. But the data show that in 2014, mobile subscriptions were 74 per 100 people in India, compared to 80 in Bangladesh, 92 in China, 129 in Indonesia and 147 in Vietnam. This is a very broad measure that includes anyone who has used the Internet from any location or device over the past 12 months. Data for 2014 show that in India, 18 people out of every 100 used the Internet, compared to 17.1 for Indonesia, 9.6 for Bangladesh, 49.3 for China and 48.3 for Vietnam. In case we think that’s good enough, a country like Ghana had 18.9 Internet users per 100 people.