Home > opinion > online-views > A generational shift in consumption and debt

A generational shift in consumption and debt

Recently, on my commute home, I saw two adjacent shops with large banners outside them. One said “Loan pe Phone" and the one next to it said “Phone pe Loan". The former was obviously selling mobile phones and was offering attractive loan options to make that purchase—while the latter was a direct sales agent of a financing company offering personal loans wherein it required just one phone call to get the loan pre-approved. These two shops seemed quite symbolic of what is happening to consumption and household debt in India. 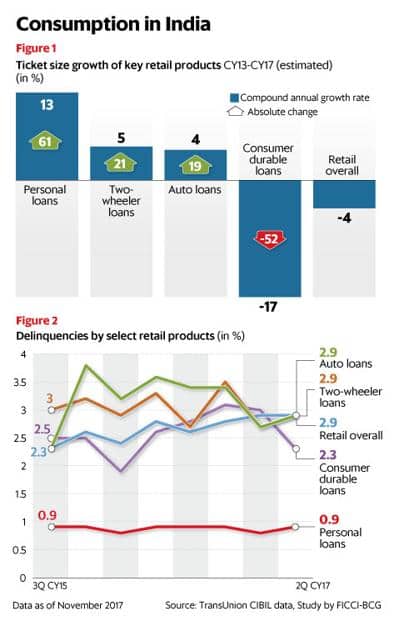 The other incident that took me further along this chain of thought happened at a family gathering. We were gathered to celebrate the birthday of a Generation Z niece and I asked her what gift she wanted. She said: “I want an add-on credit card." She was just turning 16. While I was surprised, the septuagenarians in the family, for whom “loan" was a four-letter word, were totally aghast. I was witnessing an attitudinal shift towards leverage that has happened over three generations. This is a trend which, I think, is here to stay—that the Indian household, over the next few years, will increasingly lever itself up and spend on consumption.

This isn’t a trend which is starting out now; one can find evidence for this in various data. Take, for instance, the finance penetration of Maruti cars—percentage of cars sold on which the buyer has taken a loan. That percentage has steadily increased from 68% in FY12 to 81% in FY18. At a broader level, household debt to gross domestic product (GDP) has inched up from 11.2% in FY12 to 15.7% in FY18. This trend has legs and will be aided by a confluence of several factors apart from the attitudinal shift.

An important enabler for this trend in India could be the formation of credit information bureau such as Cibil that lenders can access to check the credit history of their prospective borrowers. About a decade ago, in the absence of income documents, lenders relied on surrogate verification while assessing credit-worthiness. In an extreme case, if you stepped out of the airport and had an economy class boarding pass, you were pre-approved for a silver credit card, while if you had a business class boarding pass, you got a gold card. Things are more sophisticated now. Cibil itself has a database of 248 million unique borrowers, which has almost doubled in five years. Put differently, lenders are able to verify Cibil records of over 80% of individual loan applicants today versus only 60% five years ago.

While credit history information has been one of the enablers, data-savvy lenders, especially banks, are using their own customers’ savings and loan account data to extend targeted loans. India’s largest private sector bank, for instance, has disclosed that 50% of its incremental personal loans and 70% of incremental credit card loans are extended to customers who have an existing relationship with the bank. Aided by such data analytics, the bank has been able to grow its share of unsecured loan book from 22% of retail loans in FY12 to 32% in FY18. This share gain has happened within a retail loan book that itself has grown at 22% compound annual growth rate.

While changing attitudes, low penetration, availability and data mining are immediate tailwinds, better asset ownership records could be a medium-term driver. Digitization of land records is an important step in this direction, where a clear land title becomes actionable collateral for lending, especially in rural areas. Such digitization has continued apace in India with 86% of land records digitized as of date; in 48%, even the asset transfers are digitally recorded.

I can already imagine the (septuagenarian) naysayers objecting that this is a bad precedent and will eventually end in crisis. The distinction here is that overuse of leverage is bad. It might be worthwhile to see if there are signs of overheating. Naysayers’ exhibit A is that almost all of incremental credit growth of late has been retail-led and that is a sign of overheating. While that may be true, retail credit by itself (and this includes secured mortgages) has grown at an average of about 18% over the past three years. It is abysmally low growth in other parts of the economy that has made retail’s contribution look outsized.

Another possible sign of overheating is increase in individual ticket sizes—growth is not driven by more borrowers but by giving more credit to the same borrowers. Here again, we don’t see anything out of the ordinary. The final test is in the bad loans numbers (Figure 1). Again, nothing to report with the non-performing assets (NPA) numbers actually improving in some categories.

So what could you do as an investor? Two things, in my opinion: look for financiers who are sensibly extending such loans to retail borrowers, relying on data and technology to make better credit decisions and lower costs; also look for categories of products that the consumers are buying with this credit. These could start with shoes—yes, we did see an easy EMI (equated monthly instalment) option for a pair of shoes—and can go right up to a home. Like all powerful trends, this trend could be prone to getting over-extended in due course of time. But based on currently available data, it might be early to worry about that just yet.

And no, the niece did not get the credit card.

Swanand Kelkar is managing director at Morgan Stanley Investment Management. These are his personal views. Comments are welcome at theirview@livemint.com.