Is India ready to reset its innovation mojo?

Some key vexing issues indeed remain, but one can be optimistic about a resetting of the country's innovation mojo

Facebook CEO Mark Zuckerberg recently visited Asia and shared his thoughts at two premier universities in the region, Tsinghua University in Beijing and Indian Institute of Technology in Delhi. A member of the advisory board at Tsinghua’s School of Economics and Management, Zuckerberg spoke on similar themes at both institutions. Thinking more broadly about entrepreneurship and innovation than just profits, being calm to failures and being passionate about the entrepreneurial journey featured in his speeches—in English or Mandarin. India, from what one can gather from these speeches, is back on the global radar for innovation enthusiasts like Zuckerberg. Yet, is the country really ready for a resetting of its innovation mojo for boosting economic growth?

There’s some good news to start with. India’s recent entrepreneurial endeavours have already struck a chord with global investors. Despite fears of a bubble, the start-up India mantra continues unabated with clusters like Powai in Mumbai and Koramangala in Bengaluru now nurturing more than 4,000 of the country’s total population of start-ups. Some naysayers have argued that these new ventures have only focused on incremental business model shifts rather than on fundamental innovation that solves the country’s many problems and unmet needs. A start is a start, nonetheless, and one can be optimistic.

In addition, it is heartening to observe that the government has taken this wave seriously. Apart from many initiatives already announced—from a start-up policy to innovation prizes, among others—a recent report by the NITI Aayog, the government’s think tank, and steered by an expert committee headed by Harvard University professor Tarun Khanna, proposes the implementation of a framework titled the Atal Innovation Pyramid with short-, medium- and long-term goals. This framework could form the bulwark for re-injecting innovative and entrepreneurial flair in the Indian economy (bit.ly/1WWx72l). However, as the report argues, much needs to be done beyond the framework to further the big-tent view of innovation and entrepreneurship.

Some key vexing issues indeed remain. Industry-academia partnerships, for example, need fresh impetus. In fact, a quick patent search by assignee name at the US Patent Office for university patents (as a proxy for the ability to commercialize university research with industrial applications) throws up some disturbing comparisons. While Tsinghua University has some 1,193 US patents assigned to its credit and Massachusetts Institute of Technology (MIT) has four times that, the IIT (any campus) or the Indian Institute of Science has just about 114 and 85 assigned to them (see graphic). 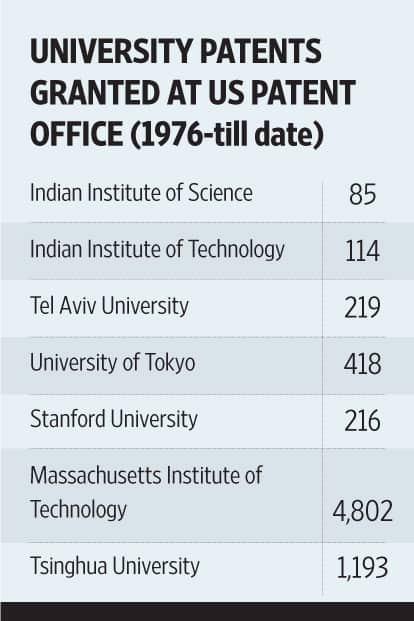 One can argue that this is an artifact of the national innovation system of a particular country, or that the search is biased with a focus on a certain patent office or even that US patents need not be the metric to measure commercialization of research efforts at universities. These are all good criticisms, but the fact remains that academia-industry partnerships is one key area needing a fillip. A noted academic scholar recently lamented in a private conversation, “I have stopped talking about it." One wonders if policymakers are taking note of this despondency. What is more disheartening is that even today, big endowments by wealthy individuals in India flow to Western universities and not to India’s universities.

Another important role will be that of incentives and whether innovation prizes in themselves will play an enhancing role in structural overhauling of incentives. Several corporate and governmental initiatives over the last decade or two offering prizes for innovation have hardly yielded the desired outcomes.

This raises an important question: does the public (and private, and public-private) innovation system in the country need a fundamental overhauling of incentives beyond prizes, be that in terms of intellectual property granted to scientists and inventors, or in terms of salaries and wages offered to innovation workers in the creative economy? This is where India desires to position itself going forward; for the objective to be achieved, it needs a stimulus from within in the form of a right set of incentives alongside foreign investment.

A final aspect to be considered is that of harmonization of the relevant offices pertaining to innovation and competition. This is a much debated question over the last half a century with a 2002 paper pointing out that competition and innovation might follow an inverted-U relationship. One immediate issue of operational concern for policymakers might be to first buckle up and professionalize evidence-driven approaches in the relevant patent offices, competition commission offices and quality-ascertaining offices in India across sectors.

For example, are the Indian Patent Office, the Competition Commission of India and the Central Drugs Standard Control Organization (in the context of pharmaceuticals) or Food Safety and Standards Authority of India (for food safety) ready for the challenges that an innovative mojo will induce? How can one harmonize their activities with a nodal, perhaps central innovation authority?

These are important administrative issues that are critical to the resetting job that this article sets out for encouraging innovation in the Indian economy. Sure, society will need to change to encourage innovativeness (which comes with tonnes of failure as Zuckerberg himself stressed in his IIT Delhi speech) too, but one can be optimistic about a resetting of the country’s innovation mojo with the above important issues being addressed.

Chirantan Chatterjee is a faculty member and innovation economist at IIM Bangalore. He is also chair of the organizing committee for the 1st India Conference on Innovation, Intellectual Property and Competition to be held on 7-8 December at IIM Bangalore. These are his personal views.