Despite high income levels on an average, the state has not managed to provide balanced growth to all its regions

The economy of Maharashtra has gone through a faster structural shift from agriculture to industry and services, compared with the shift seen at the national level. While the agricultural sector grew at less than 5% per annum since 2004-05, industry and services sectors grew at 8% and 10% per annum, respectively. While it is easy to conclude that rapid growth of the urban-centric sectors of industry and services has resulted in a lower level of urban poverty in the state, the picture changes at the micro level. About 22% of the total poor population in the state of Maharashtra is from the four main urban centres—Mumbai, Pune, Thane and Nagpur—of which more than half are in Mumbai alone. Our spatial analysis reveals that most of the business facilities, financial institutions and community services such as post offices and government offices have a high concentration in only a few locations. The urban centres, therefore, show a much higher level of inequality, compared with the other parts of the state. Mumbai, the biggest contributor to the state’s income, has attracted people from all over the country because of the significant expansion of job opportunities within the city. A large part of Mumbai enjoys a limited number of services or economic opportunities to meet the needs of the growing population.

Around 50% of the population in Mumbai lives in slums. Leaving aside the job opportunities, even the basic facilities of proper sanitation and clean drinking water do not adequately reach the people. However, it is evident that development is the key to reducing poverty—the areas with a high level of facilities available do have the lowest levels of poverty. Accordingly, a more uniform and balanced development is one of the solutions to reducing poverty.

The state also suffers from high regional inequality. The overall economic growth and generation of wealth in the state has led to the relative neglect of its distributional aspects. As many researchers have concluded, without its four main urbanized districts, conditions in the rest of Maharashtra are barely better than in low-income states such as Bihar, Madhya Pradesh, Rajasthan and Odisha. It is also evident from spatial data analysis that the concentration of business facilities and financial institutions per person in the high poverty zones of Mumbai and Pune are even higher than in the low poverty zone localities of the rest of Maharashtra. The slow trickle-down effect of economic growth to the rural economy of Maharashtra is one of the reasons of relatively high poverty rate in the state. 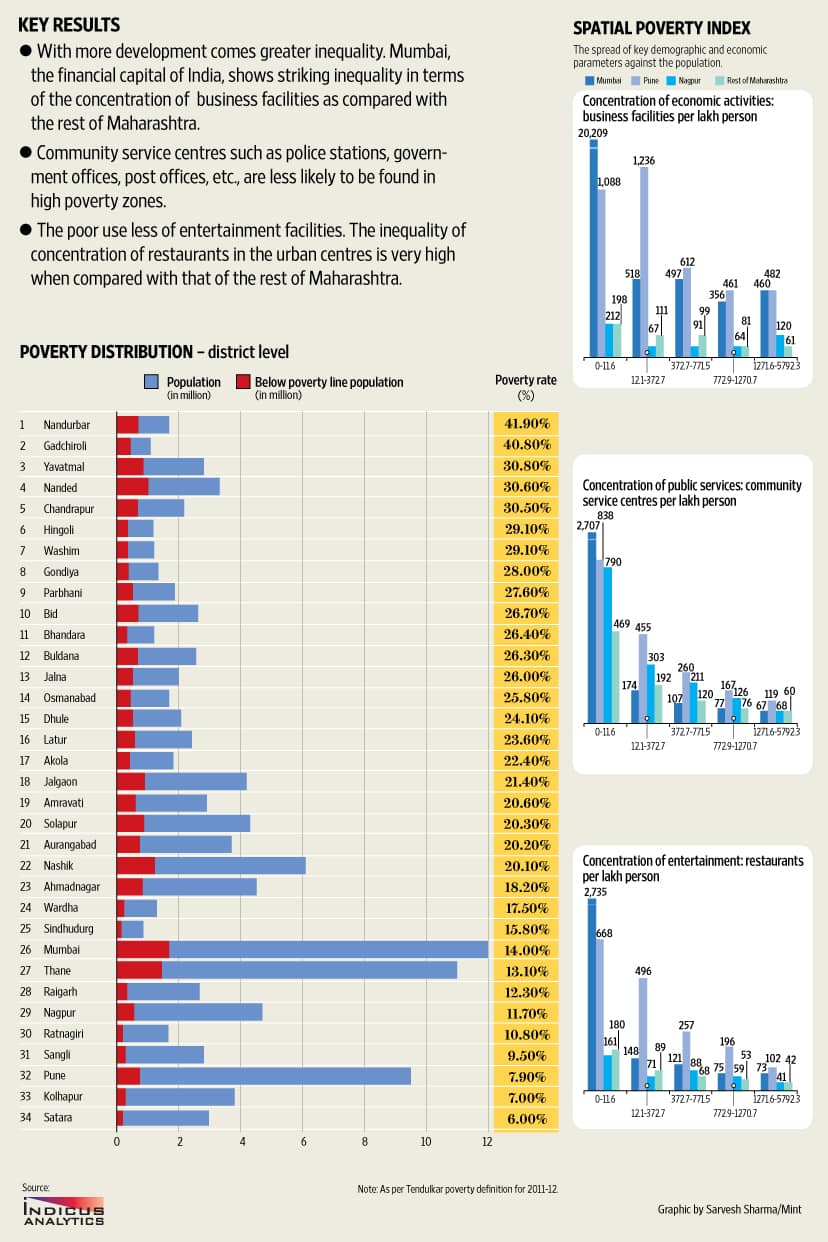 The rural economy of Maharashtra, like any other state of India, is largely dependent on agriculture. While agriculture’s contribution to the state income has rapidly declined, the workforce has continued to depend on this sector, indicating limited employment opportunities in other sectors. Our analysis shows a high proportion of agricultural labourers in the high poverty zones. At the aggregate level, Nandurbar district in the northwest and Gadchiroli district in the east have the highest rates of poverty. While analysing the data spatially at a finer micro level of 1 sq.km shows that the concentration of poor population is spread out in the entire state, nevertheless, within a district, a stark degree of inequality is evident.

Our concept of spatial poverty that can be identified and measured via remote sensing allows us a far greater set of policy insights as it allows relating poverty to the environment that gives rise to and sustains it.

Laveesh Bhandari and Minakshi Chakraborty are economists based in New Delhi. The views of the authors are their own and not those of the organizations with which they are associated.