Except people in high-income countries, most of the world cannot afford the fruits and vegetables they need, according to research in 'Lancet'

New Delhi: Three in four Indians are yet to taste the fruits of economic growth—or indeed, its veggies.

Recent research published in the British medical journal Lancet calculates fruit and vegetable intake among people of different countries, on the basis of gross national income per person.

In low-income countries, including India, only 27% of the population could have more than one serving of fruits per day.

How difficult would it be to bridge this gap? It would be a gigantic task in low-income countries, as more than half of the households’ income would have to be spent to achieve these consumption levels. The requirement drops to less than 2% for high-income countries. The income requirements are higher in rural areas than urban areas. 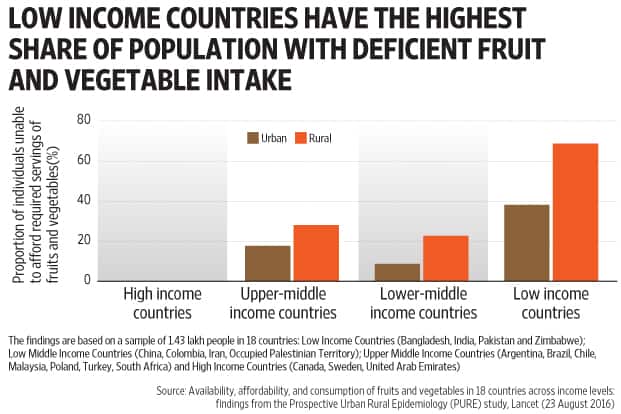 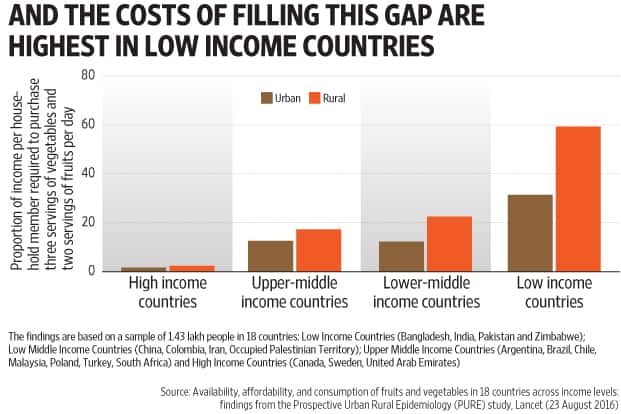 The study’s findings help us contextualize an earlier Plainfacts article which showed that increase in fruit and vegetable consumption in India (a low-income country) has been much less than the increase in China (a low-middle income country). This is despite the fact that India’s horticultural production has almost tripled since 1991-92.

The paper quotes an earlier Lancet study which showed that the lack of enough fruits and vegetables in the diet was responsible for 1.7 million deaths globally. It also says that increasing their availability and affordability is crucial to improving quality of diet of most people in low-income and low-middle income countries.

There has been big debate in India on the increasing gap between poverty estimates and average calorie intake levels. The majority view holds that declines in calorie intakes should not be taken as an indicator of worsening income levels. This consensus notwithstanding, concerns remain about the alarming level of malnutrition in the country. The glaring deficiency of fruits and vegetables in Indian diets is another pointer to the poor quality of diet of the average Indian.