Why the banks are in such a mess

If one had to pick out just one reason for the spurt in bank bad loans, what would it be? Consider this little statistic: bank loans outstanding to the infrastructure and metals sector currently account for over half the total loans outstanding to industry. It wasn’t always this high: chart 1 shows that at the end of March 2005, it was 29.8% of total industrial credit. Since then, this percentage has been rising steadily—reaching above the 50% mark this fiscal. It’s well known that the infrastructure sector suffers from very weak balance sheets, while metals have been devastated by the meltdown in commodities and the troubles in China.

If more than half the industrial portfolio of commercial banks is exposed to these two sectors, the chances of having elevated levels of non-performing assets will also be very high.

Of course, all infrastructure sectors do not suffer from the same levels of stress. Indeed, it can be argued that the Achilles’ heel of infrastructure is the power sector. Much has been written about the bankruptcy of the state electricity boards, and there’s no need to add to it. But it is to be hoped that the government’s latest Ujwal DISCOM Assurance Yojana (UDAY) scheme will help clean the mess.

Chart 3 shows how bank lending to infrastructure has gone up by leaps and bounds. In March 2005, the amount outstanding on account of bank loans to the infrastructure sector was a mere 7.9% of total non-food credit, which is total bank credit except the amounts borrowed by the Food Corp. of India. 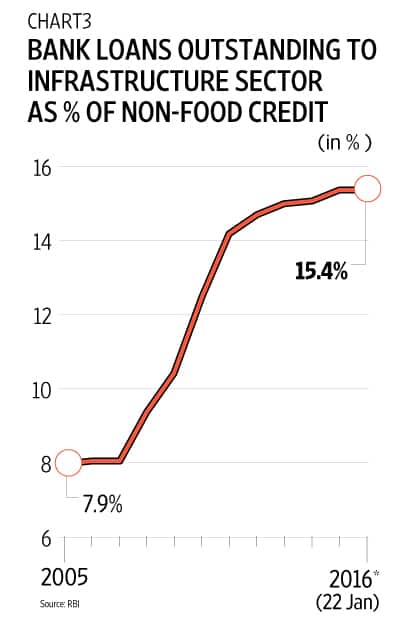 As the calls for improving the miserable state of India’s infrastructure became more and more insistent, the government prodded banks to increase their lending to the sector. But infrastructure financing, with very long payback periods and high risks, is not really the banks’ cup of tea—it should instead be financed by the institutions with long-term funding sources, such as insurance companies, pension funds and long-term lending institutions.

Banks are ill-equipped to lend for such long tenures, which results in maturity mismatches. But with the government constrained by lack of funds, they tapped bank funds instead.

The results, unfortunately, were disastrous.

To a large extent, it is the bank’s rushing into the infrastructure sector, a sector in which they should have feared to tread, that is responsible for the present bad-loan mess.

It is also very likely that state-owned banks were told, willy-nilly, to contribute to this national task of infrastructure building. That is yet another reason why government ownership of banks has proved to be pernicious. Here’s another statistic: bank loans outstanding to the power and roads sectors add up to 57% of all personal loans outstanding.

Chart 4 completes the picture. One would have assumed that lending to industry, as a proportion of total non-food credit, would come down as the economy weakened and as bad debts rose. But, strangely enough, that doesn’t seem to have happened. Chart 4 shows that the proportion of loans to industry went up between 2008 and 2013, remained more or less steady in 2014 and has only started coming down since then. 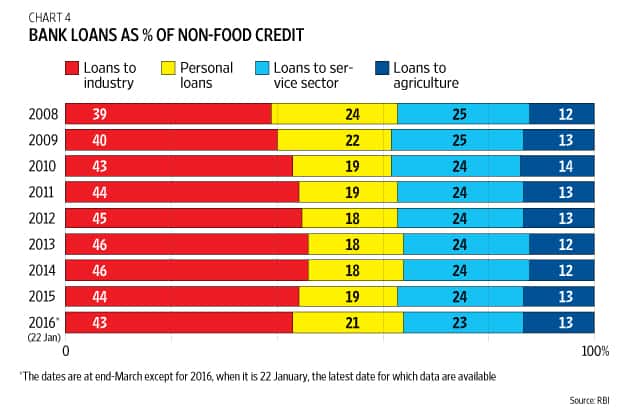 Note that at present, outstanding loans to industry are 43% of the total non-food credit—well above the 39% they were at in March 2008, at the end of the last boom. Most of the increased exposure is to large industries, which ties in with the over-dependence on loans to the infrastructure and metals sectors— the domain of large players.