Asean in the vortex of South China Sea

Asean in the vortex of South China Sea

Summit communiqués do not make compelling reading; most tend to be turgid. Yet, communiqués, despite their somniferous trait, mark a successful outcome. Indeed, the only thing worse than having a bland communiqué is not having one at all. Hence, the recently concluded Asean (Association of South East Asian Nations) summit in Phnom Penh, which failed to issue a final communiqué for the first time in the association’s 45-year-old history, will always be remembered for this ignominy. 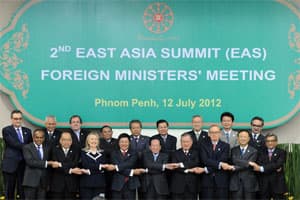 China’s sway over Cambodia, the present chair of Asean and the host of the failed meeting, is not implausible. Over the past two decades China has provided over $10 billion in aid to Cambodia and last year alone China pledged to Phnom Penh 10 times the foreign investment promised by the US. Beijing also paid for building the Peace Palace (ironically the venue of the Asean summit) and, significantly, some of the maps in the palace display Chinese names for locations in the South China Sea. Finally, the absence of a communiqué and a reference to the territorial disputes in the South China Sea is certainly to the advantage of Beijing.

In contrast, the US warned China that Beijing’s emphasis on resolving the South China Sea disputes through bilateral negotiations with individual Asean members would lead to confrontation. In addition, The US’s tacit support of the claims, particularly of the Philippines and Vietnam, also emboldened them to push for a reference to the disputes in the communiqué.

While China and the US certainly contributed to the Phnom Penh fiasco, blame should also be apportioned to the Asean members for not being able to present a united front against such external interference. This is primarily because affected Asean members—Brunei, Malaysia, the Philippines and Vietnam— have been unable to resolve their own overlapping claims in the South China Seas for past three decades, ever since the UN Convention on the Law of the Sea (UNCLOS) was concluded in 1982.

Although Asean and China signed a “Declaration on the Conduct of Parties in the South China Sea" in 2002, not much progress has been made in formalizing or enforcing this code in the past 10 years. In fact, not only China even Asean states have flouted this code with impunity.

This behaviour is, doubtless, driven by the high stakes in the South China Sea, which today is traversed by half the world’s merchant fleet tonnage and a third of all maritime traffic. Besides, proven oil reserves of 7 billion barrels and 900 trillion cubic metres of natural gas (with China’s estimate that the area might eventually yield 130 billion barrels of oil, making it the second largest reserve after Saudi Arabia), is a lucrative incentive to assert even tenuous claims.

Even energy-starved India, which is exploring oil and gas in the area and whose presence has been challenged by China, has asserted the right of “freedom of navigation and access to resources in accordance with principles of international law".

Resolving the imbroglio through diplomatic means based on UNCLOS is imperative not only for the claimant countries in the area but also for ensuring global economic recovery and well-being. The option of a military solution—similar to Japan’s ill-conceived efforts to seize oil fields in Southeast Asia on the eve of the second world war—is fraught with the danger of sparking off another deadly global conflagration. It is imperative for Asean to find a way.