With barely weeks left for the to begin its retreat, it is emerging that India will close the year with a deficit much higher than what was initially forecast

Another year and another bad monsoon. What were the odds? The India Meteorological Department (IMD) forecast this year’s monsoon—like last year—to be below normal. At that time, we all hoped that the IMD had got it wrong—the economy was on the cusp of a recovery and needed all the good fortune.

Unfortunately, from the country’s point of view, the IMD is likely to get it right (contrary to the normal rainfall forecast put out by the private weather forecaster, Skymet Weather Services Pvt. Ltd). Worse, where IMD did go wrong was in anticipating the extent of the rain deficit this year.

With barely weeks left for the annual southwest monsoon to begin its retreat, it is emerging that India will close the year with a deficit much higher than what was initially forecast. For policy planners, struggling to revive the domestic economy amid a global turmoil and the reluctance of an inflation paranoid Reserve Bank of India (RBI) to cut rates, this is yet another headache.

As on 30 August, the cumulative rainfall beginning 1 June works out to 62.47 cm of rain, compared with the normal 70.74 cm—implying that the country is in deficit of 12%. Unless there is a dramatic turnaround in the next few weeks, it is clear that India is unlikely to receive the 82.77 cm the IMD had forecast—93% of the 50-year normal of 89 cm rain.

A monsoon is considered below normal when the rainfall range is 90-96% of the LPA for the June-September period. The main reason for the IMD’s skepticism was the onset of the El Niño weather phenomenon—the warming of the waters of the Pacific Ocean which triggers atmospheric changes that impact the progress of monsoon rains over India. At that time, IMD pegged the probability of an El Niño at 70%. 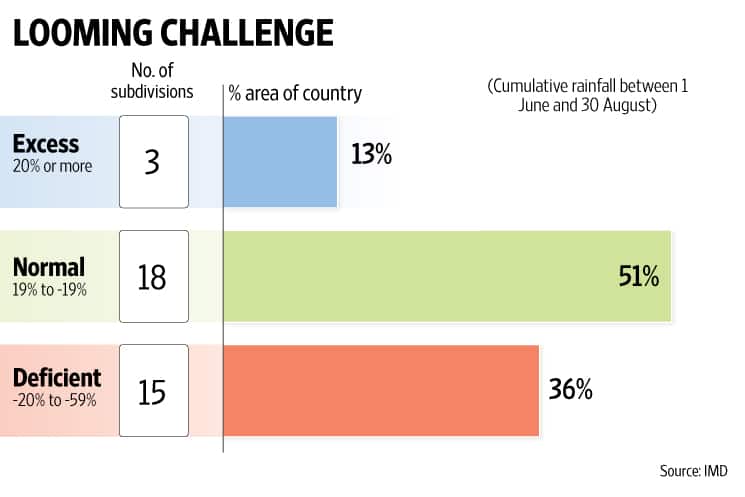 The fear, like last year when the El Niño was prevalent, was that it would cause uneven rainfall across the country. Last year, Uttarakhand, Himachal Pradesh, Punjab, Haryana, Delhi, Uttar Pradesh, Rajasthan, East Madhya Pradesh, Telangana and parts of Maharashtra faced drought-like conditions. This year is likely to be worse. Not only are more parts of India likely to receive less rainfall, but the rain deficit map is likely to overlap with last year. In other words, these states are going to face deficit rain for the second consecutive year. India receives 75% of its annual rainfall in this period and more than half the country’s farmland is rain-fed.

Rural distress has become a serious policy challenge in the last one year. Due to the sub-par monsoon and extreme weather conditions last year combining with the end of the global commodity super cycle—which has led to a dramatic slump in the prices of farm produce—rural India is facing a tremendous squeeze.

It is exactly at such a moment of stress that the structural fault lines in Indian agriculture become visible. The rapid change in the nature of farming—horticulture production has surpassed foodgrain output since 2012-13—has raised the associated price risks, leaving the farmer fiscally vulnerable.

Unfortunately, in the decade after 2004, considered the golden phase of Indian agriculture, these emerging fault lines were overlooked. It is clear then that a second successive bad monsoon is likely to generate drought-like conditions in several parts of India.

The NDA will be judged on how it responds to this new challenge, even as it deals with the tricky legacy of the Congress-led United Progressive Alliance and its electoral promise to reset governance.

Anil Padmanabhan is deputy managing editor of Mint and writes every week on the intersection of politics and economics. Comments are welcome at capitalcalculus@livemint.com.