The new age of philanthropy

The new age of philanthropy

Gilded ages can be an unusual mix of profits and philanthropy—be it a John Rockefeller then or a Bill Gates now.

India is in the early stages of a long boom that is already spawning billionaires. This could be the inflection point for a new burst of philanthropy in our country. We call it a new burst because the first generation of Indian entrepreneurs who benefited from the industrial growth from the beginning of the American Civil War to the first shots fired in World War I liberally gave back to society in the form of schools, public projects and funding the national movement. The industrial houses that climbed to the top in the worst years of the licence permit raj were too bogged down by usurious taxation to indulge in the art of giving. 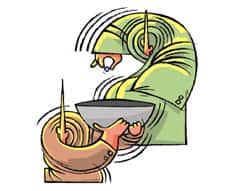 These are still early days. A report by consulting firm Bain and Co. last week showed that Indians are getting richer, but we are not giving enough to charity. Charitable donations in 2009 totalled $7.5 billion, an estimated 0.6% of the gross domestic product—far lower than 2.2% in the US and 1.6% in the UK, but way more than in Brazil (0.3%) and China (0.1%).

There are signs that this is changing. We have already seen business leaders such as Azim Premji, Nandan Nilekani, Anil Agarwal and Mukesh Ambani use their personal wealth to fund philanthropic foundations. These examples are not the same as corporate social responsibility programmes, where managements decide on behalf of shareholders to fund causes or development projects.

The flip side of this trend is the proliferation of non-governmental organizations (NGOs) that run projects funded by philanthropy. We have also seen a surge in giving by citizens in times of crises such as the tsunami that hit the Indian coast in December 2004. Yet, Bain says that almost two-thirds of donations come from the Union and state governments, very often for disaster relief. And Indian companies and citizens account for a mere 10% of charitable giving, compared with 75% in the US.

What India also needs is a shift from passive giving to what can be called active social entrepreneurship, where people who have succeeded in life use their vision and management skills to creatively use the money they have given away. A useful analogy is of the two great friends: Warren Buffett and Bill Gates. The former has willed some $30 billion of his money to the Bill and Melinda Gates Foundation, while the latter also devotes management time to the causes he now supports.

Have Indians forgotten the art of giving? Tell us at views@livemint.com