An earthquake in 1991 flattened Ganeshpur. Twenty years after the event, you can still see the devastation that was caused by the quake. The village is 7km from Uttarkashi. Its population is nearly a thousand and it has a government primary school. The school is still run from the temporary “relief" structure constructed after the earthquake. It has two teachers and 54 students.

On entering the small walled courtyard of the school, I saw that a part of the wall had been used as a blackboard, with lines written in chalk. It was news-of-the-day from the village. The only tractor in the village had still not been repaired, the sowing of onion and potato crops had started, someone’s flower bed was looking beautiful—tid bits from life in the village that the children had found interesting. 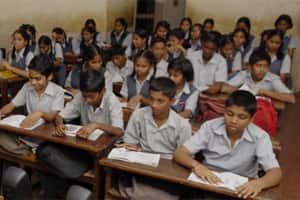 I asked her why it was the way it was. Her eyes flashed lightning, and tone a reprimand. She asked: “Don’t you know why?", meaning the obvious gender discrimination, with boys being dispatched to private schools. After that we didn’t move from our places for 20 minutes, standing and talking in the corner of the class. The children continued to do some assignment they were at.

That was my introduction to Rekha. With the Garhwal mountains rising around steeply, and the Bhagirathi flowing below, she seemed as much a force of nature. Her combination of intensity, thoughtfulness and courage is rare, very rare, anywhere. And she is a government primary school teacher in a village.

My colleagues and I sat down with her and Rajani, the other teacher, in a small room. They kept cutting juicy apples for us, fresh from the orchard nearby. We chatted about their school. We saw a collection of projects on which the school had worked for weeks. It was about children discovering first-hand the event that had shaped the collective memory of Ganeshpur, and its physical shape. These were authentic documents of the earthquake, authenticity of a child’s curiosity searching personal cataclysms.

We saw books that the children had written together with Rekha. The language, lucidity of expression and the stories would surprise anyone. So it was no surprise to hear that a number of students had works published in children’s magazines.

None of these things are prescribed by the curriculum. But they are not prohibited either. Rekha’s ingenuity has not let the system limit her. She operates within the same school system as others, but has discovered and created spaces, which lets her do all this.

This story of Rekha is set to the same tune these columns have sung before. Teachers matter more than all else in education. We have a shoddy teacher education system, and unless we improve that dramatically, our education won’t improve. Our system must motivate the teacher, not disempower them. Despite everything, good people have enough space in the system to make a genuine difference. And there are many good people.

But today’s column does not intend to merely emphasize those larger, valid points. It’s about that one exceptional individual that I met, and the question that she left me with.

That first intense 20-minute conversation ended in a way she probably wanted to avoid. We agreed with each other that besides socio-psychological factors triggering people to move their children to private schools, one key factor was the perceived quality of government schools. She agreed that if government school teachers were to do a decent job, it could make a big difference.

I asked her what was happening at her school. It is this discussion of her competence and the school’s success that I felt she wanted to avoid. But she had to admit that the number of children in her school had been going up. Parents were moving their children from private schools in the vicinity to the government school.

I told her what I felt: that she was doing a great job, that it is teachers like her that could really change lives. She looked at me. There was no lightning, no reprimand. She merely said: “Har koi jogi to nahi ho sakta, na?" It’s impossible to translate jogi. It’s equally impossible to convey the tone: the balance between a confession, a statement of finality and the question with hope.

The Bhagirathi continued to flow furiously. I had no answer.

We do owe her an answer, if nothing else.