India has two priorities for 2016: preserving hard-won macro stability and reviving growth. Let’s start with macro stability. This can mean different things at different times. During the 2013 taper tantrum months, it was all about the current account deficit, which had spiralled out of control. But with that problem in check, all eyes are turning to India’s other well-known vulnerability—the fiscal deficit, which goes hand-in-hand with public debt.

India’s government debt, although largely domestically held, is one of the highest among emerging markets (EMs). One may argue that India’s debt levels are low compared to developed economies, but the important difference is that EMs are the victims of “debt intolerance"—even at low levels of debt, they may have trouble accessing capital markets. 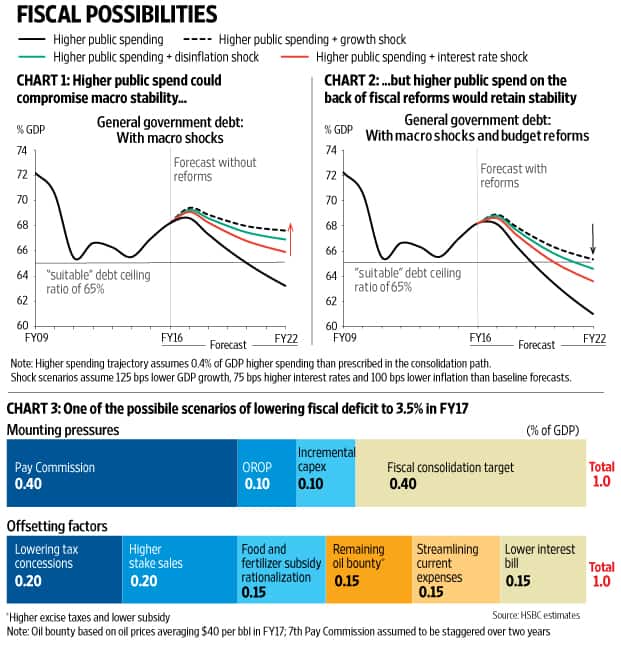 India’s record over the past decade is rather colourful. From a whopping 83.2% in financial year (FY) 2003-04, India’s debt-GDP (gross domestic product) ratio moderated to 65.5% in FY14, thanks to falling primary deficit and strong growth in the early years, and higher inflation thereafter. Based on a number of metrics and economic studies, the “suitable" level of debt for India is around 65%.

India had almost made it but FY15 brought a period of declining inflation, so debt could not be deflated away as effectively as before and growth was sluggish. The debt-to-GDP ratio started to inch up. FY16 brought with it India’s lowest nominal GDP growth for over a decade. With nominal growth not able to keep pace with nominal interest rates, debt ratios are likely to rise further.

But all is not lost. If the recovery in growth gradually picks up pace and the fiscal deficit stays on the path laid out for consolidation, our calculations show that debt ratios are likely to return to 65% in the foreseeable future.

Now enters the other priority—higher growth. India’s ongoing growth recovery experience is similar to the globally well-documented phenomenon of credit less recoveries, which typically follow a period of financial sector impairment. Growth rates during these recoveries are generally a third lower than regular ones and the output gap takes longer to close. In particular, private investment demand, which is more dependent on external funding, takes longest to revive. With new investments conspicuous by their absence and the export outlook unexciting, the government understandably wants to lend recovery a helping hand.

But if higher public spending is not accompanied by higher revenues, fiscal and primary deficits will increase, stoking government debt. Higher public spending means it would take longer for India to return to the “suitable" debt-to-GDP ratio of 65%. But more importantly, if unexpected macro shocks strike during this period, debt ratios could remain “unsuitable" for the foreseeable future (see chart 1). This risk is worth worrying about because macro shocks in the form of lower than expected growth, another bout of disinflation or higher interest rates are not unimaginable in today’s world.

In short, on a good day, the twin objectives of higher growth and lower public debt can enter a virtuous cycle; on a bad day, if either is derailed, one can drag down the other.

So, what’s the best way to have the best of both worlds—support growth and maintain macro stability? Simple. The government should undertake important fiscal reforms, such as rationalizing food and fertilizer subsidies, selling off more stakes it holds in companies and improving the tax system, for instance, by lowering tax concessions. This would generate enough funds to finance extra spending (see chart 3). There’s never been a better time to act. The fortuitous continuation of “oil bounty", even under conservative assumptions, will gift the government a little windfall, making the exercise of raising revenues far less punishing.

We find that higher public spending driven by fiscal savings elsewhere would lead to debt levels which remain sustainable, even under scenarios of macro shocks (see chart 2). Macro stability is preserved and growth is encouraged.

If ever there was a perfect example of killing two birds with one stone, this is it.