Ask any parent or teacher why children miss school, and it is unlikely the answer will be worms. Yet the World Health Organization estimates that 400 million children in the world are affected by intestinal worms. Infected children suffer from listlessness, diarrhoea and anaemia. This proves to be a silent, unspoken barrier to schooling in India. Kids miss school, fall back in their studies and ultimately drop out.

As Indian policymakers address the challenge of putting the nine million out-of-school children into the school system and making sure that they stay, there is growing evidence that school-based health programmes and mass deworming in particular are an effective way of promoting school attendance. 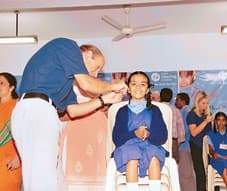 In Kenya, primary school deworming was implemented by International Child Support in a poor and densely settled farming district with high worm infection rates. Seventy five primary schools with a total enrolment of 30,000 pupils aged 6-18 years participated in the programme.

The study by Kremer and Miguel found that deworming increased school participation in treatment schools by at least 7 percentage points, cutting absenteeism by a quarter. Introducing deworming throughout primary school would add a year to the average child’s education.

A group of researchers led by Gustavo Bobonis, Edward Miguel and Charu Puri-Sharma conducted a randomized study in India on anaemia (often a symptom of worm infection). The study was conducted in the resettlement colonies of Delhi, where they delivered iron supplements and deworming drugs to pre-school children. It found 69% were anaemic and 30% had intestinal worm infections.

The schools were run by Pratham, a non-governmental organization with the largest programme on development of literacy and social skills to prepare children for primary schools. The study sample contained 200 pre-schools with a total sample size of 2,392 children. Deworming medicines and iron and vitamin A supplements were administered in health camps three times a year.

The results showed this intervention had an important impact on schooling and health. Weight increased and pre-school participation rose by 5.8 percentage points, reducing absenteeism by one-fifth. Further, the impact was the highest for subgroups with higher rates of baseline anaemia. There were larger weight gains for girls than boys and also larger school participation gains. Communities in relatively low socioeconomic conditions gained more.

There is another reason why researchers are upbeat on deworming efforts: These are relevant at a time when the one question donors and governments are asking is bang for their buck—which initiative will give them the most value for their money.

Studies have found that funding mass, school-based deworming programme is one of the most cost-effective ways a government, agency or donor can intervene with their money—it improves child health and hence increases school attendance. Regarding health, it costs about $5 per Disability Adjusted Life Year (Daly)—compared with other vaccinations such as measles and tetanus that cost $12-17 per Daly saved.

The initiative has received widespread support: The Forum of Young Global Leaders launched Deworm the World in 2007, an initiative to increase access to education by expanding deworming among school-age children.

It is coming to India: Vikram Akula, a Young Global Leader and founder and chairman of SKS Microfinance, offered to support Deworm the World by utilizing the SKS distribution channel to provide deworming tablets to communities in India, potentially reaching 50,000 villages and affecting three million households directly. Apollo Hospitals Educational and Research Foundation will also be a partner in this initiative.

India has some reason to cheer school-based health programmes: 98% of the rural population now has access to a primary school within 1km. As many as 93% of five-year-olds surveyed in 2007 were either in balwadis, anganwadis or schools, up from 85% the previous year.

Health statistics are compelling: According to the National Family Health Survey conducted between December 2005 and August 2006, 46% of India’s children aged under 3 are underweight, 39% are stunted, 20% severely malnourished and 80% are anaemic. At least 6,000 Indian children below 5 die every day due to malnourishment or lack of basic micronutrients such as vitamin A, iron, iodine, zinc or folic acid.

This fact alone can be the reason for aggressive health intervention throughout the existing school system. But now, there is evidence that this intervention leads to double benefits: improve child health as well as help pupils go to school and have a successful education. In these two dimensions, mass deworming through schools may well be the best buy.