"storyDirectUrl"
OPEN APP
Home / Opinion / How can India bridge the gap between its middle and median class?

How can India bridge the gap between its middle and median class?

Everybody knows about the great Indian poverty debate and the huge increase in the number of dollar billionaires in India during the 25 years of economic reforms in India. What about the proverbial middle class though? What are its numbers and level of well-being? Does it refer to the median population between the rich and poor or is it more of a socio-political construct? Existing research and statistics show that the latter is more likely to be the case.

Middle class is more about self-perception

In 2001-02, Delhi-based National Council of Applied Economic Research (NCAER) estimated India’s middle class to be around 5-6% of the total population. The estimates, which were based on Market Information Survey of Households, included those households which had annual incomes in the range of ₹ 2-10 lakh. Fast forward to 2011-12, and data suggests that the share of middle class has not increased much. Data from the India Human Development Survey (IHDS), jointly done by NCAER and University of Maryland, indicates that India’s middle class was just below 6% of its total population. The figures are for annual household income range of ₹ 2.7-13.4 lakh, after adjusting the 2001-02 income range of ₹ 2-10 lakh for price changes, and also adjusting for a decline in the average family size. For making price adjustments, the wholesale price index has been used. The lower bound of ₹ 2.7 lakh comes to an income of around ₹ 22,000 per month per household, which sounds like a reasonable threshold for someone to be considered middle class. Now, consider this. In the same survey, 49% of the respondents identified themselves as middle class, despite the fact that the median household income, for a typical family of four, was ₹ 5,000 per month, way below the ₹ 22,000 threshold to be considered middle-class according to NCAER’s criterion. To be sure, only three choices were given to respondents: rich, poor or middle class.

IHDS’s findings are not an exception. In a 2014 article, Devesh Kapur, professor of political science at University of Pennsylvania, and Milan Vaishnav, a senior associate at Carnegie Endowment of International Peace, also found that 49% of respondents to the Lok Survey, with a sample size of more than 62,000, considered themselves as middle class. These included even those in the lowest of the five designated income groups of the sample, noted Kapur and Vaishnav.

Thus, the notion of “middle class" appears to be more of a socio-economic construct than a statistical category which could capture the economic middle in India. While there remains a disconnect between respondents’ self-perception and objective reality, the Lok Survey found that a large proportion, i.e. more than 60% of respondents who identified themselves as middle class, were optimistic about their future prospects. Thus, it seems, people aspiring and hoping to improve their material living conditions in the near future also identified with the middle class, despite not necessarily enjoying all the material comforts at the given point of time.

On the other hand, many of the relatively rich people too identified themselves as “poor", even below the “middle class". The 2011-12 IHDS shows that even within the richest 20% of urban households, ranked by per capita income, more than 8% of them identified themselves as poor. Thus, associating oneself with the middle-class is more about self-perception than a reflection of material well-being.

While a large number of Indians might aspire to join the middle class, the reality as of now is that the traits/entitlements we normally associate with middle class are a luxury for a small minority in India. This is illustrated by the pattern of ownership of consumer durables among Indian households. Using data from the 2011-12 IHDS, we focus on five consumer durables, the ownership of which would normally be associated with being middle-class—any motor vehicle, TV, computer or laptop, cooler or AC and refrigerator.

At an all-India level, rural and urban combined, the median household in 2011-12 owned only one of the above five assets, and that was in most cases, i.e. around 90% of times, only a television set. At the urban level, the median household owned only two of the above five assets, and they were in most cases a TV and a refrigerator. 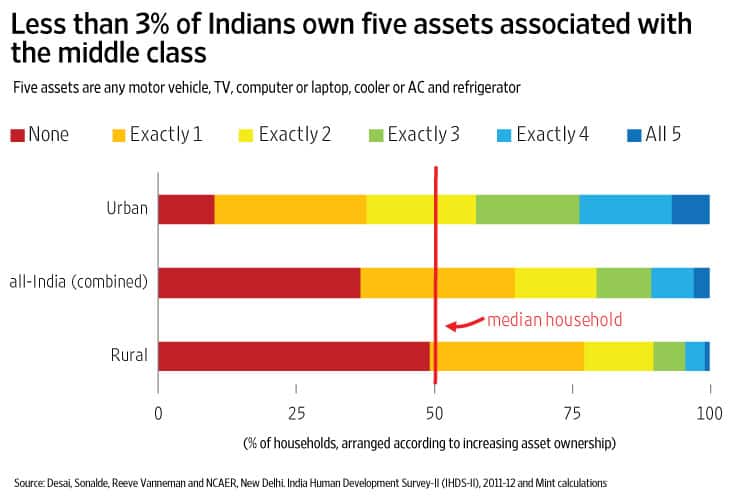 If a household owns all five of the above-mentioned assets—a motor vehicle, a TV, a computer or laptop, a cooler or AC and a refrigerator—it is among the top 2.75% of all households in India. Urban India is slightly more egalitarian, the figure being 7% instead of 2.75%. How does asset ownership reflect in terms of income levels? A household owning all five consumer durables in urban India is six times more likely to be among the top income quartile than being in the median quartile.

Moving from consumer durables to the type of work that individuals are engaged in, we find that the median class is still engaged relatively more in manual work, rather than in the so-called white-collar jobs. In fact, in the urban median class, while only 31% of working age men were employed in the so-called white-collar jobs of managers, professionals or technicians, 47% of them were engaged in occupations which might not be generally deemed to be white-collar jobs, for example, “metal, machinery and related trades workers", machine operators, drivers, labourers in construction or manufacturing, etc.

As we move from the urban median class to the rich class, i.e. to the top 10% class, excluding the richest 1%, the picture changes completely. Men from such background are generally—74% of the time—employed in the so-called white-collar jobs, while jobs like plant workers and others occupy only around 10% of the men from this group.

Thus, the occupation structure for the three different urban classes prima facie suggests that it is the rich and the super-rich together constituting the top 10% of population, whose occupation structure more closely matches our established notions of what constitutes the middle class, rather than the median 20%. The occupations under consideration refer to usual principal status as provided by the National Sample Survey Organisation (NSSO) for 2011-12. The activity status on which a person spent relatively longer time during the 365 days preceding the date of survey is considered the usual principal activity status of the person.

Meanwhile, rural occupations remain primarily dominated by more manual work, for all classes. However, even within this broad category, there are important differences. Within the median rural class, 30% of men worked as either agricultural labourers (excluding farmers who worked on own land) or as construction or industrial labourers. This proportion drops to around 10% for the richer rural sections.

The actual middle class population is not just economically but also socially skewed. This richest 10% income class, which corresponds to income levels for qualifying as middle class is almost entirely dominated by the upper castes in urban areas. For example, according to NSSO, upper castes, excluding Muslims, constituted only 30% of households in overall urban India. But they constituted 73% of the households in the top 1% class in urban India.

To be sure, social inequality is present in almost all indicators of economic well-being in India. In a recent Oxford University Press blog, Surinder S. Jodhka, professor of sociology at Jawaharlal Nehru University, and Aseem Prakash, professor at School of Public Policy and Governance at Tata School of Social Sciences, Hyderabad, warned that rather than eradicating social inequalities, the middle classes might be an accomplice to perpetuating it. “Even when the rise of middle class transforms the way people think, behave and relate to each other, the process does not do away with inequalities of caste and community. Those trying to move up in the new social and economic order use their available resources and networks, including those of caste and kinship to stabilize and improve their positions in the emerging social order, with a new framework of inequality," say Jodhka and Prakash in the blog.

Education holds the key to fulfilment of aspirations

So, is the notion of an aspirational and upwardly mobile middle class just a chimera? Not necessarily. Education is the great unifier. Irrespective of socio-economic inequalities, an overwhelmingly large section of India’s population has woken up to the importance of education. Statistics show that there is little gap in enrolment levels between various incomes classes, a contrast to the pattern of asset ownership or employment categories. But whether or not this priority is rewarded would depend on the quality in public education, as poorer sections go to government schools.

Whether or not India’s median class will be able to catapult itself to the lifestyle of middle class income levels will depend on how well we educate our younger generation. Clearly, this would also determine whether or not India moves up from its current status of a lower middle income nation. A Mint editorial published this week has correctly identified this task as a key challenge for our policymakers.

Tadit Kundu is a data journalist at Mint and Udayan Rathore is assistant professor of economics at Lady Shri Ram College for Women in Delhi University.