Bill Gates’ call for “creative capitalism" opens windows of opportunity as well as a box of paradoxes. A humanized version of capitalism seems like a friendly, win-win no-brainer. But this idea converges with trends that glimmer with the potential for a deeper, even subversive, transformation. 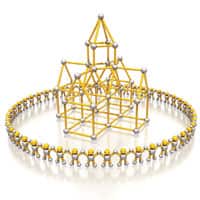 As Muhammad Yunus has said often enough, “The future of the world lies in the hands of market-based social entrepreneurs." Yunus favours business as a form of freedom which opens unlimited opportunities for expansion and replication—that can work for the rickshaw puller and marginal farmer who have otherwise appeared on the world stage merely as “the poor". It is from this vantage point of identity that Yunus says, “We can create a powerful alternative to the orthodoxy of capitalism—a social-consciousness-driven private sector, created by social entrepreneurs." Yunus’ example inspired WEF founder Klaus Schwab to set up the Schwab Foundation for Social Entrepreneurship in 1998.

Since then,?the term “social entrepreneur" has become mainstream and this is not merely because Yunus won the Nobel Peace Prize. The big push has come from the global proliferation of diverse kinds of social entrepreneurs tackling everything from health and education to soil regeneration. It has also been fuelled by strategic interventions by some of those who have made it big in the old style capitalist way. As eBay’s co-founder Pierre Omidyar says, “I have learnt that if you want ...a global impact you can’t ignore business. (Not) corporate responsibility programmes, but business models that provoke social change."

“Doing well by doing good", a controversial idea even five years ago, has now become conventional wisdom. The business of business is no longer just business as big corporations agree they must actively engage with solving the world’s big problems. “Milton Friedman must be?spinning in his grave,"?shuddered The Economist in a recent issue.

Gates’ Davos speech marks a watershed not because it says something new, but because it indicates that the trend has reached a new peak. This implies a consensus, at the heart of global capitalism, that the?current market system?and forms of innovation will not meet the needs of all people. For that, said Gates, we need system innovation.

Thus the spotlight is now focused on those who work outside the mainstream corporate model but excel at being innovative and resourceful, idealistic as well as opportunistic. These social and environmental entrepreneurs do not hand out fish nor do they stop at teaching people to fish. They aim to revolutionize the fishing industry for the masses, not just a group of investors. Plus, these “unreasonable people" have a demonstrated ability to innovate goods and services that reach the world’s four billion low-income consumers. This, now famous, base of the pyramid market is estimated to be worth about $3.47 trillion in Asia alone.

Elkington and Hartigan’s pitch to mainstream business is that social entrepreneurs usually have better market intelligence as they are highly sensitive barometers for detecting risks and opportunities. To an extent, “creative capitalism" is already a reality as governments, businesses, and non-profits work in tandem to expand—as Gates said—“the reach of market forces so that more people can make a profit, or gain recognition, doing work that eases the world’s inequities." Gates proposes an acceleration of this hybrid engine that’s fuelled simultaneously by self-interest and concern for others. But would this approach alter the nature and future of Microsoft? For instance, the principles of the open source movement are better oriented to aligning technology with the values of wider civil society. The Power of Unreasonable People shows how the open source ethos helps democratize clusters of entrepreneurial work. “Although public and private sector leaders alike (may) argue that changing the system is the realm of folk like Marx and Lenin, the fact is that social and environmental entrepreneurs’ work casts a hard light on the current economic system’s dysfunctions," write Elkington, head of the consultancy firm SustainAbility, and Hartigan, who heads the Schwab Foundation for Social Entrepreneurship.

This means cutting-edge social entrepreneurs won’t settle for palliative half-measures. If their reach and energy grows, both the business and social sphere will change in ways that can’t be predicted. For instance, there is a fascinating prospect of the giant Google.com being, willingly, dwarfed by its offspring, Google.org. The Wall Street Journal recently reported that Google’s co-founders have been pushing their non-profit entity towards more radical and strategic interventions. Instead of lobbying for tighter energy-efficiency standards, Google is intervening in the business sphere to make renewable energy cheaper. Separately, a parallel stock market for social investing may be launched in London by 2009.

The excitement about social entrepreneurship, naturally, has a shadow. It tends to view every social and economic dysfunction as a market distortion or failure that can be fixed by reconfiguring incentives. But there are conflicting interests which can only be addressed in the domain of rights through politics—the art of negotiating power relations. Thus, the potential of social entrepreneurship depends not so much on the “unreasonable people" themselves, but on enough of us ordinary,?“reasonable" folk thinking and acting first as citizens and then as consumers and investors.

Rajni Bakshi, a freelance journalist, is the author of Bazaars, Conversations and Freedom soon to be published by Penguin, India. Comment at theirview@livemint.com