The key themes for markets in 2016

The logic of mean reversion should lead to a better 2016. But much depends on how the themes that played out in 2015 change

By the end of 2015, the markets finally realized that Prime Minister Narendra Modi is no magician, able to pull an economic recovery out of his hat.

To be fair, there were plenty of reasons for optimism. The drop in oil and commodity prices was a windfall. India, the fastest growing major economy, was supposed to be a magnet for foreign investment. Corporate earnings were expected to revive. The unblocking of stalled projects and government spending on roads and railways was expected to boost investment demand. Animal spirits were expected to be lifted by a business-friendly government. And, of course, there was always the promise of “reforms" just around the corner. But by the end of the year, the government’s mid-year economic review scaled down its gross domestic product (GDP) growth target for 2015-16 substantially and, even worse, forecast that growth in 2016-17 will be only marginally higher.

For the markets, the logic of mean reversion should lead to a better 2016. But much depends on how the themes that played out in 2015 change. Here are some of them:

US dollar strength has been a pervasive theme in 2015. Will it continue in 2016? For those who follow correlation, cast your eye on the accompanying chart. It shows the INR-USD rate and the S&P BSE Sensex over the past one year—when the rupee dips, so does the Sensex. 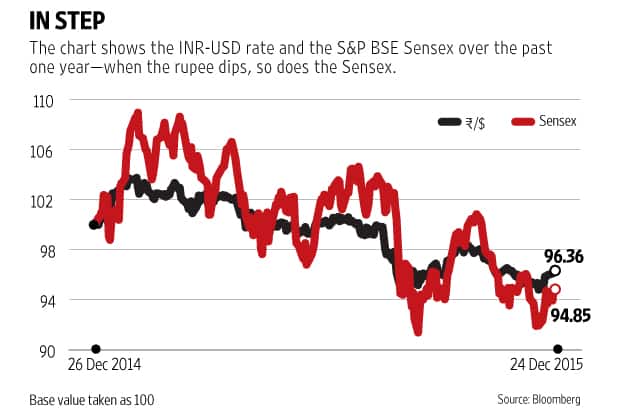 Sure, correlation is not causation, but the strength of the US dollar has been a headwind for emerging markets (EMs) in 2015 and continuing Fed rate hikes should keep it elevated. But the US dollar is by far the most crowded trade in global markets, making it a tempting contrarian bet. Recall that when European Central Bank president Mario Draghi dashed the markets’ sky-high expectations of more accommodation, we saw the euro claw back some ground in December. And if the Fed doesn’t deliver the three rate hikes the market is pricing in at the moment, the dollar will weaken.

The markets expect a very gradual Chinese growth slowdown. The expectation is that the Chinese authorities will intervene with more monetary stimulus. While the market’s faith in the abilities of the Chinese Communist Party is touching, investment-led bubbles have usually ended in tears. Chinese growth has been fuelled by a massive infusion of largely misdirected credit and growth is likely to come a cropper as the debt is paid down. Little wonder they devalued their currency in August and then weakened it again in December. A depreciated yuan will affect Chinese firms that have borrowed abroad, while a cheaper yuan will be a threat to its trading partners, already suffering from dumping as China desperately tries to export its vast, excess industrial capacity. The December survey of global fund managers by Bank of America-Merrill Lynch hit the nail on the head when it said, “until there is two-way risk in the renminbi, investors see one-way risk in oil, commodities, EM".

The plunge in commodity prices accelerated in 2015 as sagging Chinese growth and tepid global demand led to investors stampeding out of the asset class. Will commodities bottom out in 2016 as producers curb supply? The International Monetary Fund doesn’t think so and it forecasts a continued decline in the prices of metals, food and beverages, agricultural raw materials and crude oil in 2016. In particular, new production from Iran coming into the world markets should keep a lid on crude oil prices.

The main boost to the Indian economy in 2015 was from lower oil prices. Sajjid Chinoy, chief economist at JP Morgan India, said lower oil prices provided a 1.3 percentage points boost to growth in the last four quarters. He estimates the windfall was distributed as follows: 0.9% of GDP to the government, 0.8% of GDP to households, and 0.4% retained with firms. The finance ministry also says lower oil prices have pushed up economic growth, especially consumption.

But here’s the rub: the mid-year review points out this boost will be much smaller in 2016 as oil prices are unlikely to go down much further. That would mean neither household spending nor corporate bottomlines nor government revenues will see the incremental boost they saw in 2015. It’s unlikely this shortfall will be wholly met by either capital expenditure or extra government expenditure or even export growth. And the planned pruning of the fiscal deficit to 3.5% of GDP in 2016-17 from 3.9% will lead demand to contract further.

Says the review, “Unless supply side reforms provide an impetus to growth, real GDP growth next year based on an analysis of likely demand is not likely to be significantly greater than growth this year."

If pruning the fiscal deficit is postponed and if the Reserve Bank of India cuts rates in 2016, growth may be a bit higher. And rural demand will revive if the monsoon does well. But here’s the warning from a Citibank NA note, “We think Malaysia and India need to show some fiscal consolidation to safeguard their ratings."

The first thing to remember is the stock market does not reflect the domestic economy—a large chunk of Sensex earnings comes from abroad. While earnings estimates for FY16 have seen a steady downward revision, estimates for FY17 remain high, leaving open the space for disappointment. Nevertheless, a strategy note by Credit Suisse Group AG says the pace of earnings cuts may improve because it’s not possible for oil to fall $60 per barrel or steel to fall $300 per tonne from here and because the weights of globally linked sectors in the Sensex and Nifty have fallen.

That said, the Bank of America-Merrill Lynch survey finds that global fund managers’ positioning in EMs remains near record lows. While that increases the chances of a bounce, China will remain a Damocles’ sword over fund flows to emerging markets. India and the Philippines have been the darlings of the EM pack and Citibank NA says that could change. The Citi note says, “Sentiment towards these countries should weaken next year, thanks to political and institutional constraints. Asset valuations for these countries are elevated, though greater foreign positioning in financial assets of India relative to the Philippines (e.g. Indian equities is a consensus overweight among GEM—global emerging market—funds) could make the former more vulnerable than the latter. In the case of India, we could see increasing risk of growing perception that reform momentum is waning."