Our manner is the product of a society recently literate (5% of Indians could read a century ago). Words hold less meaning in such a culture, and fewer ideas can be communicated through them alone.

Because of this, our expression of emotion is more pronounced. The Indian bowler who has missed, the quiz contestant who gets it wrong, contorts his face or winces, exhibiting his distress more openly than would someone from European or even other Eastern societies. This reaction is involuntary and not easy to suppress, because it is cultural.

Since communication through words isn’t efficient, Indian stand-up comedy is different. It has high content of mimicry. This is because the humour cannot come from words alone, such as you would find elsewhere, even in lowbrow stand-up such as Jay Leno or Conan O’Brien. We must have gestures, facial expression and action. The stand-up man in India imitates and amplifies the familiar, like Raju Srivastav, who is excellent at doing it. This preference of gesture over idea is the reason why we like slapstick over wit.

Because it is quite unsubtle, India’s popular entertainment is not for the intelligent, which in India means urban, upper-class and English-speaking. This drives the Indian elite to watch French and Spanish cinema at home instead. Indian television is unbearable for this audience, because its serials carry a very heavy dose of emotion which the Indian loves.

Musicians will notice something unusual when they look at Hindi music sheets. Bollywood’s female songs are sung three tones higher on average than popular songs in the West. Many professional singers who attempt the Bollywood song actually cannot sing it at the original pitch because it’s too high. The question is why it’s been composed so high. The answer, and composers will know it, is that a higher pitch corresponds with a younger girl’s voice. It more efficiently communicates virginity. 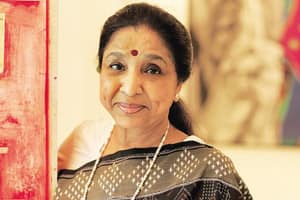 He chose to work with Asha Bhosle instead. Bhosle is a more versatile singer than her sister, but because of her lower range unable to efficiently communicate the virginity which Indians put such a premium on.

This is why she always remained second for the audience, and is identified with sultry cabaret songs which communicate the opposite of chastity. The sexually experienced woman in Bollywood is communicated in song through a low voice, such as that of Ila Arun’s or Usha Uthup’s, and their voice cannot be used to represent a heroine’s.

In India the very poor are illiterate. Their communication has the highest emotional content, since there is little of the intellect they have to express. The banter of the slum is inevitably loud and their quarrels are marked by shrieking because that is the only way they are able to telegraph strong feeling.

The educated also bring emotion into debate. In a discussion, the Indian television anchor is quickly agitated. This is because what he demands from the politician is not information but agreement. His questioning is rarely about data. This is an argument more than it is an interview. Arguments are conducted from positions of belief rather than in the spirit of inquiry.

It is difficult to exorcize our emotional side entirely because for most of us this is normal behaviour.

Indians who return from years abroad, particularly those in academia, show the difference. The quality of their communication is higher and its content tends to be more objective. They also have developed the ability to listen and internalize before responding. This is something Indians have a problem with, because the emotion must be displayed quickly in the conversation so that the other person understands our view.

An emotional culture might ignore words even when they are true, because they do not correspond to our emotion, to what we feel. This makes Indians quite unhinged at times. At Jallianwala Bagh in 1997, Prince Philip noticed the plaque that falsely claims “two thousand Hindus, Sikhs and Muslims...were martyred". He remarked the number seemed exaggerated and must include those wounded. He was right (379 people died), but the protocol officer accompanying him was appalled and told the press, which ruined the royal visit with its hysterical breast-beating.

The problem was the word “exaggerated". We placed that word in our emotional view of the event, while Prince Philip was talking objectively.

It was reported later that the prince had once remarked to his wife, the Queen, that he had been “with that bastard’s (Dyer’s) son in school". Prince Philip wasn’t an apologist for Dyer at all. But with Indians he did not understand that within the larger truth (“the Jallianwala massacre was a bad thing"), we find it difficult to accommodate nuance or shade.

It isn’t fine that someone’s words are correct, it is important for us that he make cooing sounds.

Travelling to India in the early 1920s, the writer Aldous Huxley attended a Congress session in Kanpur. Gandhi is introduced, and the crowd applauds him strongly as he comes on.

But once Gandhi begins to speak, Huxley wrote in his book Jesting Pilate, the crowd goes back to chatting, stretching, ordering water and going out for strolls, returning noisily. Huxley does not understand it, but the way the delegates engage with Gandhi, how they receive him, is through darshan, not his words.

That is unique to our culture, and observing and asking ourselves what makes us this way is a good way for us to understand the anarchy of India.

Aakar Patel is a director with Hill Road Media. Send your feedback to replytoall@livemint.com