We were lunching at an upscale Mediterranean restaurant when the table next to us, overflowing with a large family talking loudly in Kannada, exploded with laughter. “Two years ago, no one came here except people who really cared about this kind of food," carped my friend. “Now that it’s trendy, all these people are here. I’m sure they don’t even know what they’re eating," she said, pointing at her beet carpaccio. 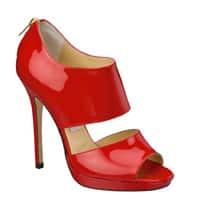 Drool worthy: Would you fancy Jimmy Choo if the West didn’t?

Why is it more important to know the bylanes of London than those of Jaipur? Would we care about Ethiopian cuisine if it weren’t popular among yuppies in New York or San Francisco? The answers to such questions are self-evident yet stubbornly unacknowledged. “One of the unfortunate and visible consequences of Empire" and its more recent incarnations is, as Varma writes, “the sterile mimicry it bequeaths to its former subjects, and especially to its elites. That mimicry becomes a way of life; in time, it is accepted as the benchmark of social superiority."

While much of the hand-wringing over “brown sahibs" may seem like old news—particularly to anyone with a glancing knowledge of post-colonial literature—Varma’s urgent attention to the steady erosion of our cultural heritage in so-called new India is refreshing and necessary; more so as his perspective cannot be dismissed as nationalist chauvinism. The problem lies not in what is gained but what is lost in this unequal embrace. There is no harm per se in learning “Baa, Baa, black sheep," reciting Shakespeare by heart, or enjoying a fine glass of wine, except when these become a preferred alternative to our tradition, cuisine, language, and lore. “The difference between loss and gain is blurred for those on the receiving end of the supposed imperatives of our new market-driven age," Varma writes.

The greater weakness in Varma’s book is that he aims much of his intellectual ammunition at the West than at his countrymen. In framing us as victims of colonialism, Becoming Indian lets us off the hook for a glaring lack of self-esteem made more unconscionable by the self-congratulation over our burgeoning confidence and nationalist pride. In order to love one’s country, one must first know it well—or at least better than any other.