There is such a plan, but it is not a promise. It is a wish.

Foxconn Technology Group’s ideas for US investment are starting to take shape, and the more concrete they become the less logical they appear.

Chairman Terry Gou explained over the weekend that the Taiwanese company is considering setting up a display-making plant in America that would cost more than $7 billion and might create 30,000 to 50,000 jobs.

Before anyone celebrates, or tweets, this victory, let’s remember an important caveat from Gou himself. According to a Reuters reporter, who attended Foxconn’s annual lunar new year party, the chairman stated his position in unusual clarity.

There is such a plan, but it is not a promise. It is a wish.

As I’ve outlined before, what are sometimes taken by naive and unsuspecting government officials to be promises by Gou to invest are, in fact, often just ideas, thoughts, notions. Or even wishes.

An investment that size points to a 10.5G display factory. To most people, such terminology means nothing. To insiders, it indicates that Foxconn wants to manufacture among the largest panels available in the industry. We’re talking sheets of glass 2.94 meters by 3.37 meters, or roughly 800 iPhone 7 Plus screens per piece. Capacity for this theoretical factory hasn’t been outlined, but rival Chinese manufacturer BOE Technology Group Co. is spending $5.8 billion (¥40 billion) on a 10.5G plant in Hefei, China. The size of the panels, the value of the investment and the economies of scale in panel manufacturing suggest that any Foxconn plant would be of similar grandeur. And grand it is. BOE’s planned factory will be able to churn out 90,000 sheets a month. That’s equal to more than 72 million iPhone 7 Plus screens, or more than 868 million annually. Now if the factory is to be used for TVs, the calculus is different, equating to a modest 21.9 million 42-inch TVs a year. But bear a few things in mind. First, the global TV market is in decline — Witsview estimates shipments dropped 3.8% last year — and there’s little to suggest consumers are suddenly in a hurry to buy anything with a screen larger than a postcard. In fact, the pipeline of technology gadgets points to screenless devices like Amazon.com’s Echo, consumer drones, wearable devices and smartwatches with the smallest of displays.

Second, Nikkei quoted Gou at the same event as saying that Apple is willing to co-invest in the Foxconn facility to meet its own needs. If this is true, then something is awry. Apple may want those panels for its existing suite of products, from iPhones to Macs, but all of this demand combined couldn’t absorb all that supply, and that’s on the extremely uncharacteristic assumption that Apple procures from a single source. If a TV is in the works, then it would be an about-face for a company that had once considered making one but later thought better of it. 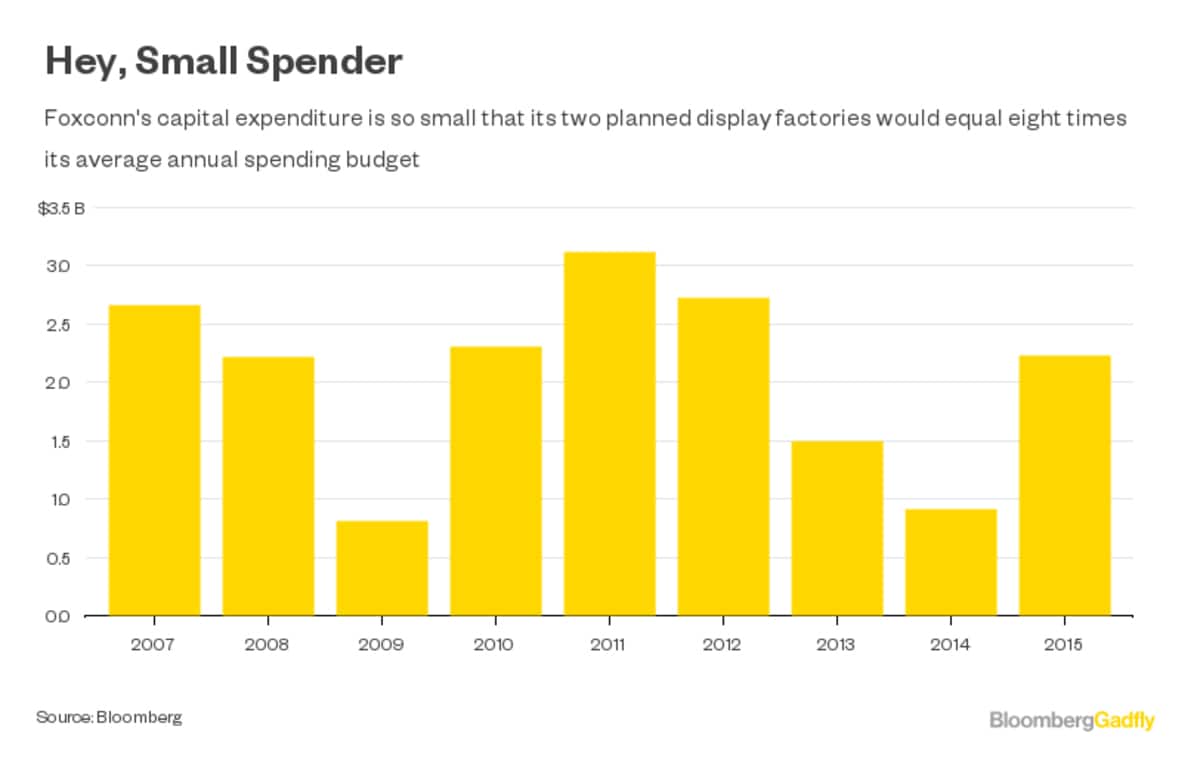 In addition, about 60% of Apple’s sales are outside the US, a figure that’s growing. That means most of the screens produced in the US would be shipped back overseas, a wonderful scenario for Trump’s America but one not grounded in reality because raw displays are too fragile to ship, while fully or partially completed screens require a China-sized manufacturing infrastructure that’s beyond the hopes even of the new president.

Then there’s the wider economics for a panel industry that’s faced such oversupply that its players in the past opted to collude on prices to maintain any semblance of profitability. A plant in the US would add to the dozens in Asia, including the BOE factory and another one that Foxconn already plans to build in China through its venture with Sharp Corp.

Three weeks ago I predicted that displays were one of the few areas in which Foxconn might consider setting up in the US and that its plan for China was a bad sign for America.

Given the incredible costs to US taxpayers of luring an investment — and the incredible likelihood that such incentives won’t change the underlying economics of the industry where layoffs and factory closings are inevitable — the risk isn’t that Foxconn chooses not to build a US panel factory, but that it does. Bloomberg